Mycotoxins in Cattle Feed and Feed Ingredients in Brazil: A Five-Year Survey
Next Article in Special Issue

Preparation of Monoclonal Antibody against Deoxynivalenol and Development of Immunoassays

Aspergillus niger produces carcinogenic ochratoxin A (OTA), a serious food safety and human health concern. Here, the ability of A. niger CBS 513.88 to produce OTA using different carbon sources was investigated and the underlying regulatory mechanism was elucidated. The results indicated that 6% sucrose, glucose, and arabinose could trigger OTA biosynthesis and that 1586 differentially expressed genes (DEGs) overlapped compared to a non-inducing nutritional source, peptone. The genes that participated in OTA and its precursor phenylalanine biosynthesis, including pks, p450, nrps, hal, and bzip, were up-regulated, while the genes involved in oxidant detoxification, such as cat and pod, were down-regulated. Correspondingly, the activities of catalase and peroxidase were also decreased. Notably, the novel Gal4-like transcription factor An12g00840 (AnGal4), which is vital in regulating OTA biosynthesis, was identified. Deletion of AnGal4 elevated the OTA yields by 47.65%, 54.60%, and 309.23% using sucrose, glucose, and arabinose as carbon sources, respectively. Additionally, deletion of AnGal4 increased the superoxide anion and H2O2 contents, as well as the sensitivity to H2O2, using the three carbon sources. These results suggest that these three carbon sources repressed AnGal4, leading to the up-regulation of the OTA biosynthetic genes and alteration of cellular redox homeostasis, ultimately triggering OTA biosynthesis in A. niger. View Full-Text
Keywords: Aspergillus niger; ochratoxin A; secondary metabolism; redox homeostasis; carbon sources; AnGal4 Aspergillus niger; ochratoxin A; secondary metabolism; redox homeostasis; carbon sources; AnGal4
►▼ Show Figures 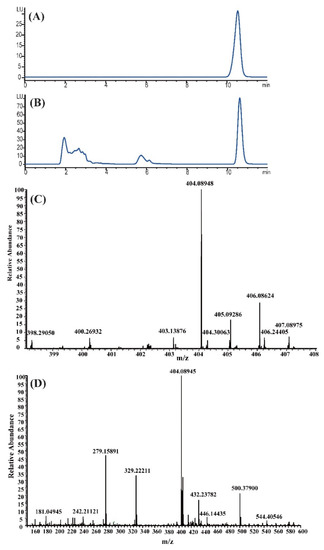