Evaluation of Anti-PT Antibody Response after Pertussis Vaccination and Infection: The Importance of Both Quantity and Quality

One of the main virulence factors produced by Bordetella pertussis is pertussis toxin (PTx) which, in its inactivated form, is the major component of all marketed acellular pertussis vaccines. PTx ADP ribosylates Gαi proteins, thereby affecting the inhibition of adenylate cyclases and resulting in the accumulation of cAMP. Apart from this classical model, PTx also activates some receptors and can affect various ADP ribosylation- and adenylate cyclase-independent signalling pathways. Due to its potent ADP-ribosylation properties, PTx has been used in many research areas. Initially the research primarily focussed on the in vivo effects of the toxin, including histamine sensitization, insulin secretion and leukocytosis. Nowadays, PTx is also used in toxicology research, cell signalling, research involving the blood–brain barrier, and testing of neutralizing antibodies. However, the most important area of use is testing of acellular pertussis vaccines for the presence of residual PTx. In vivo models and in vitro assays for PTx often reflect one of the toxin’s properties or details of its mechanism. Here, the established and novel in vivo and in vitro methods used to evaluate PTx are reviewed, their mechanisms, characteristics and limitations are described, and their application for regulatory and research purposes are considered. View Full-Text
Keywords: pertussis toxin; acellular pertussis vaccines; in vitro assays; in vivo models pertussis toxin; acellular pertussis vaccines; in vitro assays; in vivo models
►▼ Show Figures 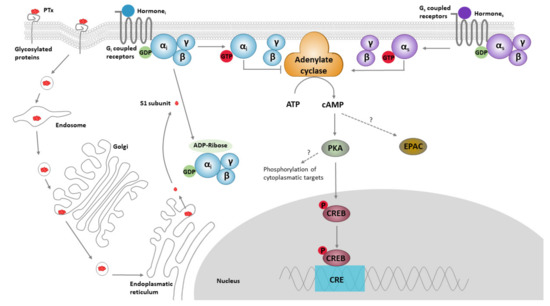