The venoms of small rear-fanged snakes (RFS) remain largely unexplored, despite increased recognition of their importance in understanding venom evolution more broadly. Sequencing the transcriptome of venom-producing glands has greatly increased the ability of researchers to examine and characterize the toxin repertoire of small taxa with low venom yields. Here, we use RNA-seq to characterize the Duvernoy’s gland transcriptome of the Plains Black-headed Snake, Tantilla nigriceps, a small, semi-fossorial colubrid that feeds on a variety of potentially dangerous arthropods including centipedes and spiders. We generated transcriptomes of six individuals from three localities in order to both characterize the toxin expression of this species for the first time, and to look for initial evidence of venom variation in the species. Three toxin families—three-finger neurotoxins (3FTxs), cysteine-rich secretory proteins (CRISPs), and snake venom metalloproteinases (SVMPIIIs)—dominated the transcriptome of T. nigriceps; 3FTx themselves were the dominant toxin family in most individuals, accounting for as much as 86.4% of an individual’s toxin expression. Variation in toxin expression between individuals was also noted, with two specimens exhibiting higher relative expression of c-type lectins than any other sample (8.7–11.9% compared to <1%), and another expressed CRISPs higher than any other toxin. This study provides the first Duvernoy’s gland transcriptomes of any species of Tantilla, and one of the few transcriptomic studies of RFS not predicated on a single individual. This initial characterization demonstrates the need for further study of toxin expression variation in this species, as well as the need for further exploration of small RFS venoms. View Full-Text
Keywords: colubrid; Duvernoy’s gland secretion; rear-fanged snake; RNA-seq; transcriptomics; venom colubrid; Duvernoy’s gland secretion; rear-fanged snake; RNA-seq; transcriptomics; venom
►▼ Show Figures 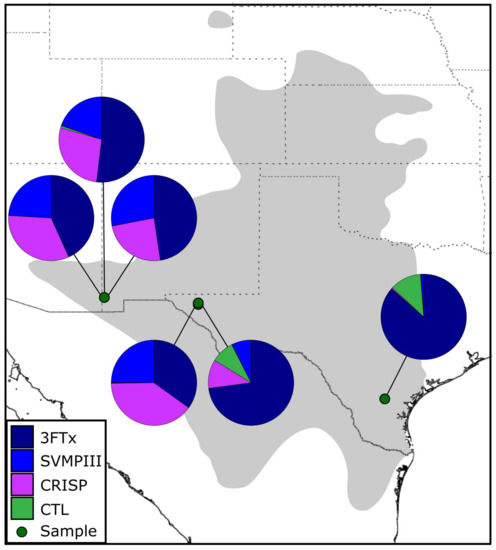