A Review of Nephrotoxicity of Microcystins

Linda A. Lawton
2 and

Since conventional drinking water treatments applied in different countries are inefficient at eliminating potentially toxic cyanobacterial peptides, a number of bacteria have been studied as an alternative to biological filters for the removal of microcystins (MCs). Here, we evaluated the degradation of not only MCs variants (-LR/DM-LR/-RR/-LF/-YR), but also non-MCs peptides (anabaenopeptins A/B, aerucyclamides A/D) by Paucibactertoxinivorans over 7 days. We also evaluated the degradation rate of MC-LR in a peptide mix, with all peptides tested, and in the presence of M. aeruginosa crude extract. Furthermore, biodegradation was assessed for non-cyanobacterial peptides with different chemical structures, such as cyclosporin A, (Glu1)-fibrinopeptide-B, leucine-enkephalin, and oxytocin. When cyanopeptides were individually added, P. toxinivorans degraded them (99%) over 7 days, except for MC-LR and -RR, which decreased by about 85 and 90%, respectively. The degradation rate of MC-LR decreased in the peptide mix compared to an individual compound, however, in the presence of the Microcystis extract, it was degraded considerably faster (3 days). It was noted that biodegradation rates decreased in the mix for all MCs while non-MCs peptides were immediately degraded. UPLC–QTOF–MS/MS allowed us to identify two linear biodegradation products for MC-LR and MC-YR, and one for MC-LF. Furthermore, P. toxinivorans demonstrated complete degradation of non-cyanobacterial peptides, with the exception of oxytocin, where around 50% remained after 7 days. Thus, although P. toxinivorans was previously identified as a MC-degrader, it also degrades a wide range of peptides under a range of conditions, which could be optimized as a potential biological tool for water treatment. View Full-Text
Keywords: cyanopeptides; microcystin; anabaenopeptin; aerucyclamide; bacterial degradation rate; UPLC-MS cyanopeptides; microcystin; anabaenopeptin; aerucyclamide; bacterial degradation rate; UPLC-MS
►▼ Show Figures 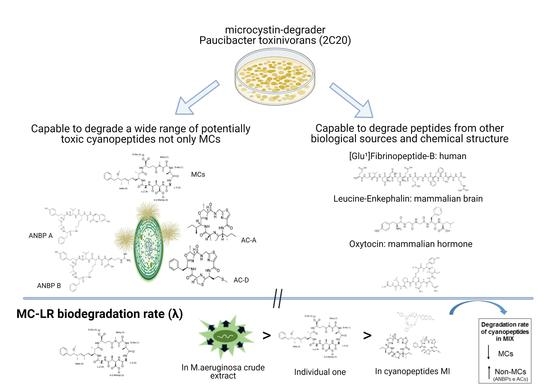