AFLA-PISTACHIO: Development of a Mechanistic Model to Predict the Aflatoxin Contamination of Pistachio Nuts

Mycotoxin contamination of feed does not only cut across food and feed value chains but compromises animal productivity and health, affecting farmers, traders and consumers alike. To aid in the development of a sustainable strategy for mycotoxin control in animal-based food production systems, this study focused on smallholder farming systems where 77 dairy cattle feed samples were collected from 28 smallholder dairy establishments in the Limpopo and Free State provinces of South Africa between 2018 and 2019. Samples were analyzed using a confirmatory UHPLC–MS/MS (Ultra-high performance liquid chromatography-tandem mass spectrometry) method validated for simultaneous detection of 23 mycotoxins in feeds. Overall, mycotoxins assessed were detected across samples with 86% of samples containing at least one mycotoxin above respective decision limits; up to 66% of samples were found to be contaminated with at least three mycotoxins. Findings demonstrated that deoxynivalenol, sterigmatocystin, alternariol and enniatin B were the most common mycotoxins, while low to marginal detection rates were observed for all other mycotoxins with none of the samples containing fusarenon-X, HT-2-toxin and neosolaniol. Isolated cases of deoxynivalenol (maximum: 2385 µg/kg), aflatoxins (AFB1 (maximum: 30.2 µg/kg)/AFG1 (maximum: 23.1 µg/kg)), and zearalenone (maximum: 1793 µg/kg) in excess of local and European regulatory limits were found. Kruskal–Wallis testing for pairwise comparisons showed commercial feed had significantly higher contamination for deoxynivalenol and its acylated derivatives, ochratoxin A and fumonisins (FB1 and FB2), whereas forages had significantly higher alternariol; in addition to significantly higher fumonisin B1 contamination for Limpopo coupled with significantly higher enniatin B and sterigmatocystin for Free State. Statistically significant Spearman correlations (p < 0.01) were also apparent for ratios for deoxynivalenol/fumonisin B1 (rs = 0.587) and zearalenone/alternariol methylether (rs = 0.544). View Full-Text
Keywords: multi-mycotoxins; UHPLC-MS/MS; smallholder farming; dairy cattle; dairy feed multi-mycotoxins; UHPLC-MS/MS; smallholder farming; dairy cattle; dairy feed
►▼ Show Figures 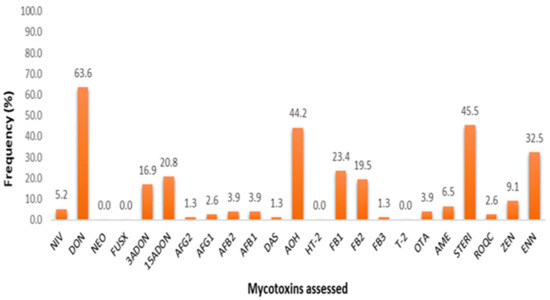