Toxic Animal-Based Medicinal Materials Can Be Effective in Treating Endometriosis: A Scoping Review

Endometriosis is a common estrogen-dependent, chronic inflammatory disease experienced by 10–15% of reproductive-age women [1,2,3]. It is defined as a disease in which endometrium-like tissue exists outside the uterus [2]. Endometriosis negatively affects the quality of life and well-being of women of childbearing age owing to distressing and debilitating symptoms and complications [4]. The most common clinical symptoms are dysmenorrhea, pelvic pain, infertility, and various clinical symptoms, such as dyspareunia, anal pain, and abdominal and adnexal masses [5,6]. Hypotheses on the origin of endometriosis occurrence include endometrial origin due to retrograde menstruation and non-endometrial origin, such as coelomic metaplasia and lymphatic and vascular metastasis [4,7]. The interaction between endocrine, immunologic, pro-inflammatory, and proangiogenic processes appears to be involved in the development of endometriosis [2]. In addition, endometriosis is a benign disease, but it displays similar features to malignancy, such as progressive, invasive, estrogen-dependent growth, and recurrence [8,9].
Conventional treatments for endometriosis include analgesics, combined oral contraceptives, gonadotropin-releasing hormone agonists, and surgery [4,10,11]. However, there are limitations such as unpleasant and sometimes dangerous side effects and high recurrence rates [5]. Thus, patients with endometriosis seek traditional Chinese medicine treatments to cure the primary lesions and relieve symptoms, with fewer side effects [12,13,14]. In traditional Chinese medicine, “blood stasis” is considered the basic etiology of endometriosis, and thus treatment is aimed at removing the stasis by promoting blood circulation [15]. In east Asian countries, animal-based medicinal materials, which eliminate blood stasis and facilitate blood circulation, have traditionally been used to treat diseases. In Korea, there are records that such materials were used to address gynecological diseases caused by blood stasis [16]. It seems that animal-based medicinal materials were used mainly in China, where such substances are widely in use to treat various diseases such as rheumatism [17], kidney disease [18], gynecological diseases [19], and cardiovascular and cerebrovascular diseases [20].
Venomous and poisonous animals have long been an area of interest in the treatment of diseases. Animals produce toxins in specialized glands or cells to protect themselves from predators and to predate on other animals [21]. Animal toxins include “poison”, which is produced by specialized cells or tissues and transmitted via ingestion or contact, and “venom”, which is produced in tissues or organs and delivered parenterally via specialized apparatus such as stingers, teeth, and nematocysts. [22]. Animal poisons and venoms are composed of different classes of molecules, and they contain abundant proteins, peptides, and neurotransmitters [21,22]. Although our understanding of the complexity of animal toxins is still limited, recent studies have shown that animal toxins can be developed as cancer treatments because of their ability to inhibit cell growth, inhibit angiogenesis, and induce apoptosis [23,24].
Considering the pathophysiology of endometriosis and the treatment mechanism of animal poisons and venoms identified in previous studies, various animal poisons and venoms are thought to be effective against endometriosis. Recently, preclinical and clinical studies investigating the effects of animal poisons and venoms on endometriosis have been reported. However, as far as we know, no review articles on studies using toxic animal-based medicinal materials to treat endometriosis have been published. Therefore, in this study, we outline the use of toxic animal-based medicinal materials for endometriosis and explore the possibility of its clinical use.

We searched the following databases from inception to October 2020: MEDLINE, EMBASE, one Chinese database (China National Knowledge Infrastructure (CNKI)), and one Korean database (Oriental Medicine Advanced Searching Integrated System (OASIS)). The search words were “Vespae Nidus OR Nidus Vespae OR Bee venom OR Tabanus OR Mylabris OR Cantharides OR Agkistrodon OR Snake venom OR Bufonis Venenum OR Bufo OR Bufo Siccus OR Toad venom OR Bufonis Crustum OR Toad cake OR Secretio Bufonis OR Hirudo OR Leech OR Scolopendra OR Scolopendrae OR Eupolyphaga OR Steleophaga OR Scorpio OR Gecko OR Tokay” AND “endometriosis”. There were no language limitations in this study.

After literature searching, we identified a total of 153 studies (6 in English database, 146 in Chinese database, and 1 in Korean database), from which 74 duplicate studies were excluded. By screening the titles and abstracts of 79 studies, 11 studies were found to be irrelevant due to the study type (10 reviews and 1 survey), 25 studies irrelevant due to the subject, and 13 studies irrelevant due to the intervention were excluded. After assessing the full text of the remaining 30 studies for eligibility, 20 studies were finally included, excluding one study due to irrelevance in the study type, one study due to irrelevance in the subject, three studies due to irrelevance in the intervention, and five studies due to insufficient details about the composition of the herbal medicine. Of the 20 studies finally selected, 8 were experimental studies and 12 were clinical studies. A flow diagram of the study selection process is shown in Figure 1.

Among the studies included in this analysis, there were eight preclinical studies [27,28,29,30,31,32,33,34] investigating the effect of animal toxins on endometriosis, two in vitro studies [28,30], one both in vivo and in vitro study [29], and five in vivo studies [27,31,32,33,34].
The medicinal interventions used in the eight studies were largely divided into three categories, namely medicinal compounds extracted from animal toxins in two studies [28,29], individual medicinal extracts in two studies [27,34], and medicinal decoctions in four studies [30,31,32,33]. The composition of the medicinal formulae used in the four studies is summarized in Table 1.
Among the toxic animal-based medical materials, Hirudo was the most commonly used in medicinal decoctions [30,31,32,33], followed by bufalin twice [28,29].
According to the eight studies, the underlying mechanisms of animal toxins against endometriosis were as follows: induction of apoptosis [28,29,30], inhibition of angiogenesis [31,32], reduction of estrogen level [27], suppression of matrix metalloproteinase (MMP)-9 expression [34], and anti-inflammatory effect [33] (Table 2).

This research was supported by the National Research Foundation of Korea (NRF) grant funded by the Korean government (MSIT) (No. NRF-2019R1G1A1100022).

The data will be made available upon reasonable request.

The authors declare that there are no conflict of interest regarding the publication of this paper. 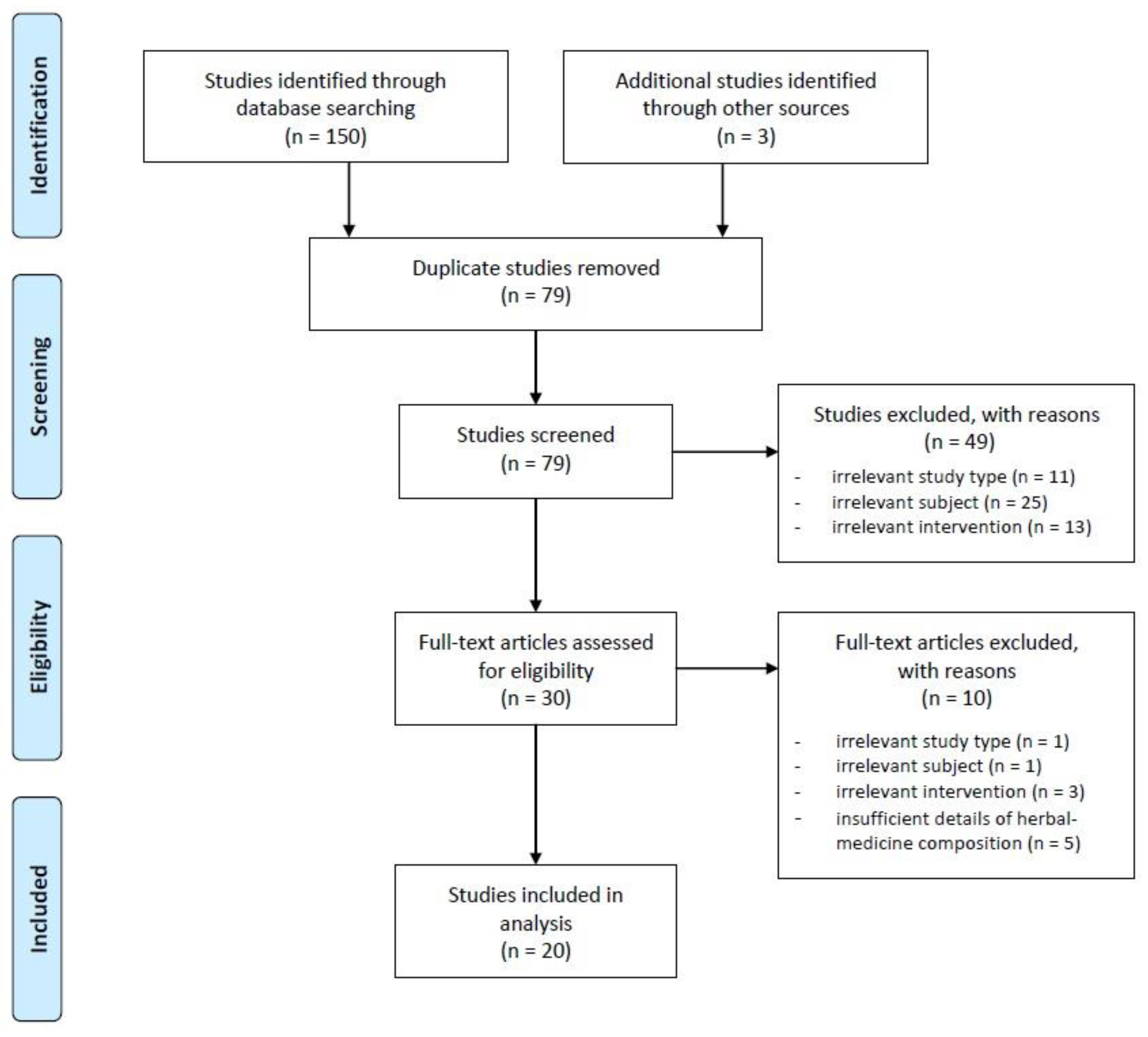 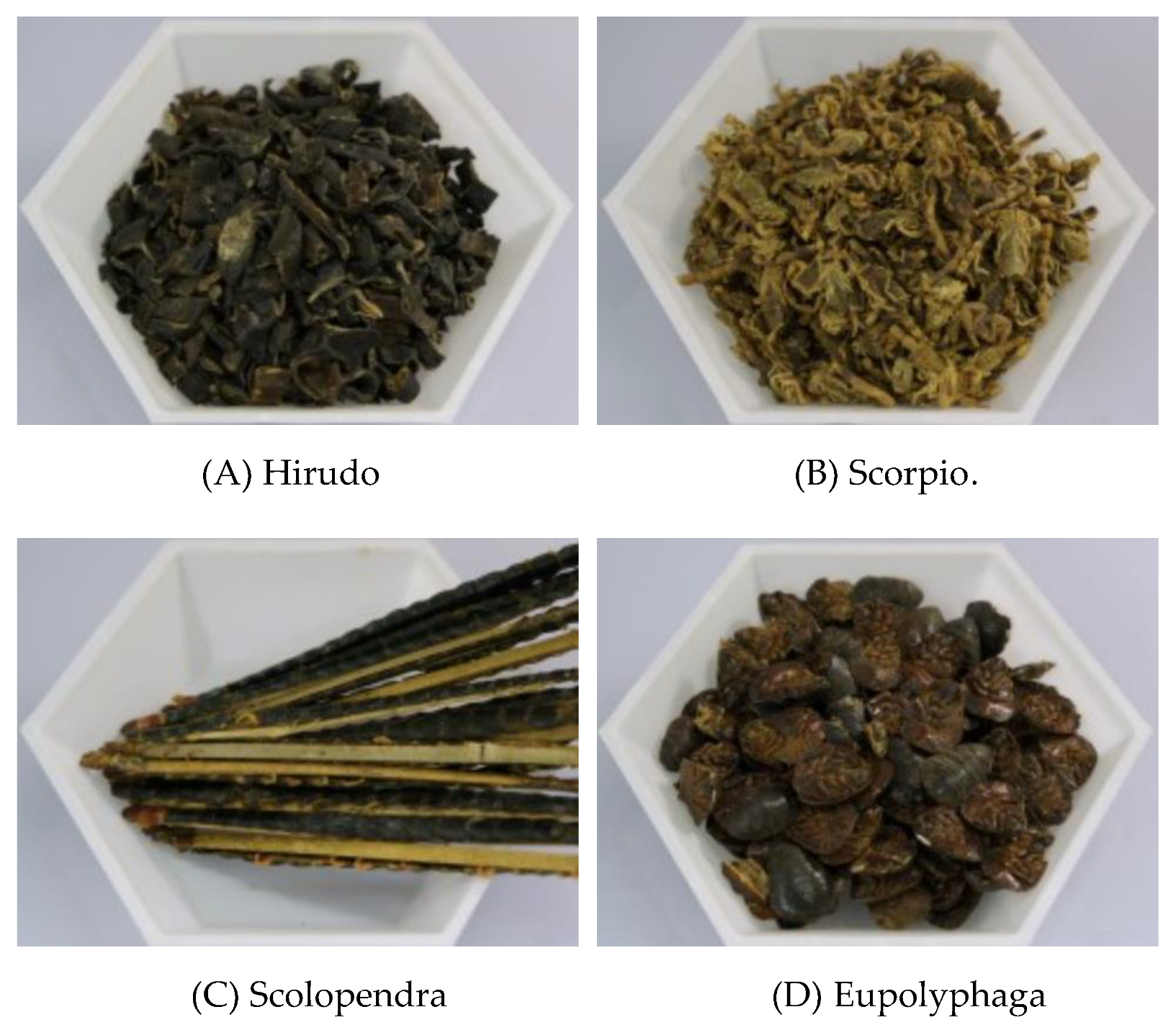