Transformation of Selected Trichothecenes during the Wheat Malting Production

Latroeggtoxin-VI (LETX-VI) is a peptide neurotoxin newly found from the eggs of spider L. tredecimguttatus. To explore the mechanism of action of the LETX-VI on nerve cells, the effects of LETX-VI on PC12 cells, a commonly used neuron model, were analyzed using a pull-down assay-guided strategy. LETX-VI was shown to interact with 164 PC12 cell proteins that have diverse molecular functions such as binding, catalysis, regulation, structural activity, etc., thereby extensively affecting the biological processes in the PC12 cells, particularly protein metabolism, response to stimulus, substance transport, and nucleic acid metabolism, with 56.71%, 42.07%, 29.88% and 28.66% of the identified proteins being involved in these biological processes, respectively. By interacting with the relevant proteins, LETX-VI enhanced the synthesis of dopamine; positively regulated cell division and proliferation; and negatively regulated cell cycle arrest, cell death, and apoptotic processes, and therefore has limited cytotoxicity against the PC12 cells, which were further experimentally confirmed. In general, the effects of LETX-VI on PC12 cells are more regulatory than cytotoxic. These findings have deepened our understanding of the action mechanism of LETX-VI on nerve cells and provided valuable clues for further related researches including those on Parkinson’s disease. View Full-Text
Keywords: Latroeggtoxin-VI; interaction protein; pull-down; mass spectrometry; PC12 cell; L. tredecimguttatus egg Latroeggtoxin-VI; interaction protein; pull-down; mass spectrometry; PC12 cell; L. tredecimguttatus egg
►▼ Show Figures 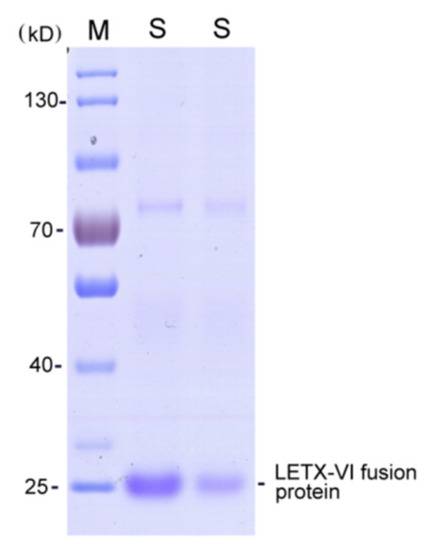