Hemolytic uremic syndrome (HUS) is a severe renal illness that is characterized by hemolytic anemia, thrombocytopenia, and acute renal failure [1,2]. In most cases, HUS affects children and is preceded by an infection with Shiga toxin-producing Escherichia coli (STEC—STEC-HUS) [3]. HUS-causing STEC strains produce type 1 (Stx1) and/or type 2 (Stx2) Shiga toxins [4]. The toxins pass the intestinal wall and enter circulation. They are mainly recognized by the glycolipid receptor globotriaosylceramide (Gb3) on target cells [5,6], such as human umbilical vein endothelial cells (HUVECs), human glomerular microvascular endothelial cells (HGMVECs), and human brain microvascular endothelial cells, leading to toxin internalization. The expression of the Gb3 receptor and sensitivity of the endothelium to Stx is increased under pro-inflammatory conditions. To model such conditions in vitro, endothelial cells are pre-incubated with inflammatory mediators, such as tumor necrosis factor α (TNFα) [7].
Shiga toxin has been implicated in protein synthesis inhibition, the induction of signaling pathways, and apoptosis [8,9]. Nevertheless, the mechanisms involved in glomerular microvascular endothelial inflammation, which causes renal damage in HUS, are still not well understood.
In the past, we reported increased numbers of mononuclear and polymorphonuclear leukocytes in the glomeruli of STEC-HUS patients, and another study showed the presence of polymorphonuclear cells in the glomeruli of patients that died during an acute STEC-HUS episode [10,11,12]. A high leucocyte blood count in the acute phase of the disease is related to a prognosis of a worse outcome [13]. Furthermore, both Stx1 and Stx2 induce leucocyte adhesion to the surface of primary HGMVECs, a cell type damaged in HUS. This process is partly abolished by heparinase treatment, indicating an important role for heparan sulfate proteoglycans (HSPGs) in Stx-mediated inflammation [14]. HSPGs consist of core proteins with covalently attached heparan sulfate side chains. The HSPGs are located in the basement membrane and at the cells surface. These molecules play an important role in inflammation, as they are able to bind chemokines and mediate leukocyte rolling, adhesion, and transmigration [15].
Next to cell-mediated inflammation, the role of the complement system in STEC-HUS has been studied. Alternative pathway (AP) complement activation biomarkers have been found in the circulation of children with HUS [16,17]. In in vitro experiments, Stx2 has been shown to bind complement factor H (CFH), an important endogenous AP inhibitor, and, as such, to promote AP activation [18]. Furthermore, Stx1 induced the surface expression of P-selectin and C3 binding to human microvascular endothelium of dermal origin [19].
Thus far, only supportive therapy is available for STEC-HUS. The complement component C5 inhibitor eculizumab, although highly effective in atypical HUS (not preceded with STEC infection) has shown inconsistent results in STEC-HUS patients [20,21]. Therefore, other mechanisms besides C5 activation within and/or outside of complement are likely to be important for STEC-HUS progression, and more research is needed to identify future therapy targets.
In this study, we hypothesized that Stx is able to alter the gene expression of HSPGs and/or AP complement genes in endothelial cells and, in this way, promote inflammation and endothelial damage seen in HUS. To investigate this, primary HGMVECs from different donors were used and compared with HUVECs. As the endothelium of the kidney is mainly involved in the pathogenesis of HUS, differences between these endothelial cell types could be of high importance for the understanding of the disease, and, to date, not many studies have been done on Stx with primary HGMVECs. There are numerous different HSPGs expressed in human tissues, but here, we focused on the HSPGs CD44, syndecan-4, glypican-1, and betaglycan because these are known to be expressed on the glomerular endothelial surface and thus may be relevant in HUS [15]. We also analyzed the gene expression of intercellular adhesion molecule-1 (ICAM-1), a major leucocyte adhesion molecule, and the alternative pathway complement components C3, CFH, complement factor I (CFI) and membrane cofactor protein (MCP)/CD46, as altered expression of these genes may lead to local inflammation-mediated damage in glomeruli.

The effect of Stx1 on mRNA levels of CD44, syndecan-4, glypican-1, and betaglycan on primary HGMVECs and HUVECs from three different donors was analyzed. No changes in HSPG mRNA expression were observed when HGMVECs or HUVECs were stimulated with Stx1 alone (Figure 1). When cells were exposed to 10 ng/mL of TNFα for 24 h without Stx1 stimulation, the mRNA expression of all HSPG genes was not significantly affected in HGMVECs (Figure 1A,C,E,G), while only the expression of CD44 and syndecan-4 was marginally increased in HUVECs (<2-fold at all time points; Figure 1B,D,F,H). The stimulation of HGMVECs with Stx1 after exposure to TNFα resulted in the profound mRNA upregulation of CD44 (up to 13.5-fold at 48 h) and the even stronger upregulation of syndecan-4 (up to 869-fold at 24 h) (Figure 1A,C). When HUVECs were used, a minor upregulation of syndecan-4 mRNA was observed (maximum of 2.4-fold at 24 h) (Figure 1D).
Next, we analyzed whether the mRNA upregulation of CD44 and syndecan-4 in HGMVECs was translated into a higher expression of these HSPGs on the cell surface. Incubation times of 24 and 48 h were chosen, as mRNA upregulation was observed to be highest in these conditions. The incubation of cells for 48 h with TNFα and 1.0 nM Stx did not yield enough viable cells for reliable fluorescence-activated cell sorting (FACS) analysis, so only 24 h of incubation were analyzed. No significant upregulation compared to untreated samples was observed when cells were treated with Stx1 alone. When HGMVECs were stimulated with Stx1 after TNFα exposure, only syndecan-4 protein expression was upregulated (>3-fold; Figure 2A,B).
Altogether, we demonstrated that Stx1 strongly upregulates the mRNA expression of the HSPG proteins CD44 and syndecan-4 in HGMVECs after TNFα exposure. A much lower effect and only for syndecan-4 was seen when HUVECs were used. The mRNA levels of glypican-1 and betaglycan were unaffected in both cell types. At the protein level, only syndecan-4 upregulation on the surface of HGMVECs was observed.

Next, we analyzed whether Stx1 affects the expression of ICAM-1, a major leucocyte recruitment and adhesion molecule. At the mRNA level, no effect was observed when HGMVECs or HUVECs were incubated with Stx1 alone (Figure 3A,B). Exposure to 10 ng/mL of TNFα without Stx1 stimulation for 6 h led to a significant increase of ICAM-1 mRNA levels in HUVECs (24-fold), though this effect diminished after longer incubation times (Figure 3B). The stimulation of cells with Stx1 after TNFα yielded an increase in ICAM-1 mRNA in both HGMVECs (maximum of 320-fold) and HUVECs (maximum of 22-fold) at 12 and 24 h of incubation (Figure 3A,B). The ICAM-1 mRNA levels decreased after 48 h of incubation in both cell types.
ICAM-1 protein expression was not increased on the surface of HGMVECs after Stx1 incubation alone (Figure 2C). However, exposure to TNFα alone led to a 10-fold upregulation of ICAM-1 protein levels on the surface. Stimulation with Stx1 after TNFα yielded lower level than TNFα alone, though it was still five times higher compared to unstimulated control cells (Figure 2C).
Because soluble ICAM-1 (sICAM-1) is known to play an important role in inflammation, we also measured concentrations of sICAM-1 protein in the culture supernatant. This was not affected by stimulation with Stx1 alone in HGMVECs and HUVECs (Figure 3C,D). Exposure to TNFα alone led to an increase (maximum of 12-fold) in protein levels after 48 h of incubation in both cell types. The incubation of HGMVECs with Stx1 after TNFα led to an increase (maximum of 29-fold) in the culture supernatant after 48 h of incubation (Figure 3C), while no effect was seen in HUVECs (Figure 3D).
Altogether, the exposure of cells to TNFα in combination with treatment with Stx1 caused the upregulation of ICAM-1 mRNA levels. This translated into higher sICAM-1 levels in the supernatant when HGMVECs were used.

The dysregulation of the AP of the complement system and as result inflammation and damage to the endothelium has been suggested as a possible mechanism for the pathogenesis of STEC-HUS. Next, we analyzed the effect of Stx1 on the expression of the AP components C3, CFI, CFH, and MCP/CD46.
No effect on C3 was observed with Stx1 incubation alone in HGMVECs or HUVECs (Figure 4A,B). Exposure to 10 ng/mL of TNFα alone led to the upregulation of C3 mRNA expression in HUVECs (maximum of 19-fold at 24 h) (Figure 4B). The incubation of cells with Stx1 after exposure to TNFα led to a profound increase in C3 mRNA levels after 48 h in HGMVECs (maximum of 1623-fold) and HUVECs (maximum of 37-fold) (Figure 4A,B). No effect on the mRNA expression of CFH, CFI, and MCP/CD46 in HGMVECs or HUVECs was observed (data not shown).
When C3 protein concentrations were measured in the culture supernatant, no effect of Stx1 stimulation with or without TNFα was observed in HGMVECs or HUVECs (Figure 4C,D).
Altogether, of the measured complement components, only C3 was upregulated at the mRNA level by Stx1 in both cell types. No increase of C3 concentration in the culture supernatant was observed.

The experiments were performed using human endothelial cells obtained from adult renal tissue that were removed due to medical reasons or isolated from human umbilical veins. The described studies were approved by the appropriate ethics committee and were therefore performed in accordance with the ethical standards laid down in the appropriate version of the 1964 Declaration of Helsinki. All donors gave their informed consent prior to inclusion in this study.
Primary HGMVECs were obtained from human kidneys of three donors and cultured as described previously [38]; passages 8–10 were used for experiments. HUVECs from three donors were harvested according to a previously described method [39], and passages 3–4 were used for experiments. Confluent cells were stimulated for 6, 12, 24, and 48 h with Stx1 (0.0, 0.1, and 1.0 nM) with or without 24 h preincubation with 10 ng/mL of TNFα (Roche Diagnostics). Stx1 was a kind gift from M. Bielaszewska (University of Münster, Münster, Germany) and was endotoxin-free, as determined by a Limulus assay.

Statistical analysis was performed using a two-way ANOVA or one-way ANOVA as appropriate. A p-value of 0.05 was set as statistically significant. Data are expressed as mean values +/− standard error (SE). 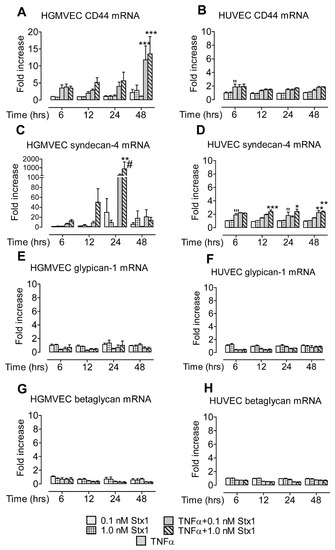 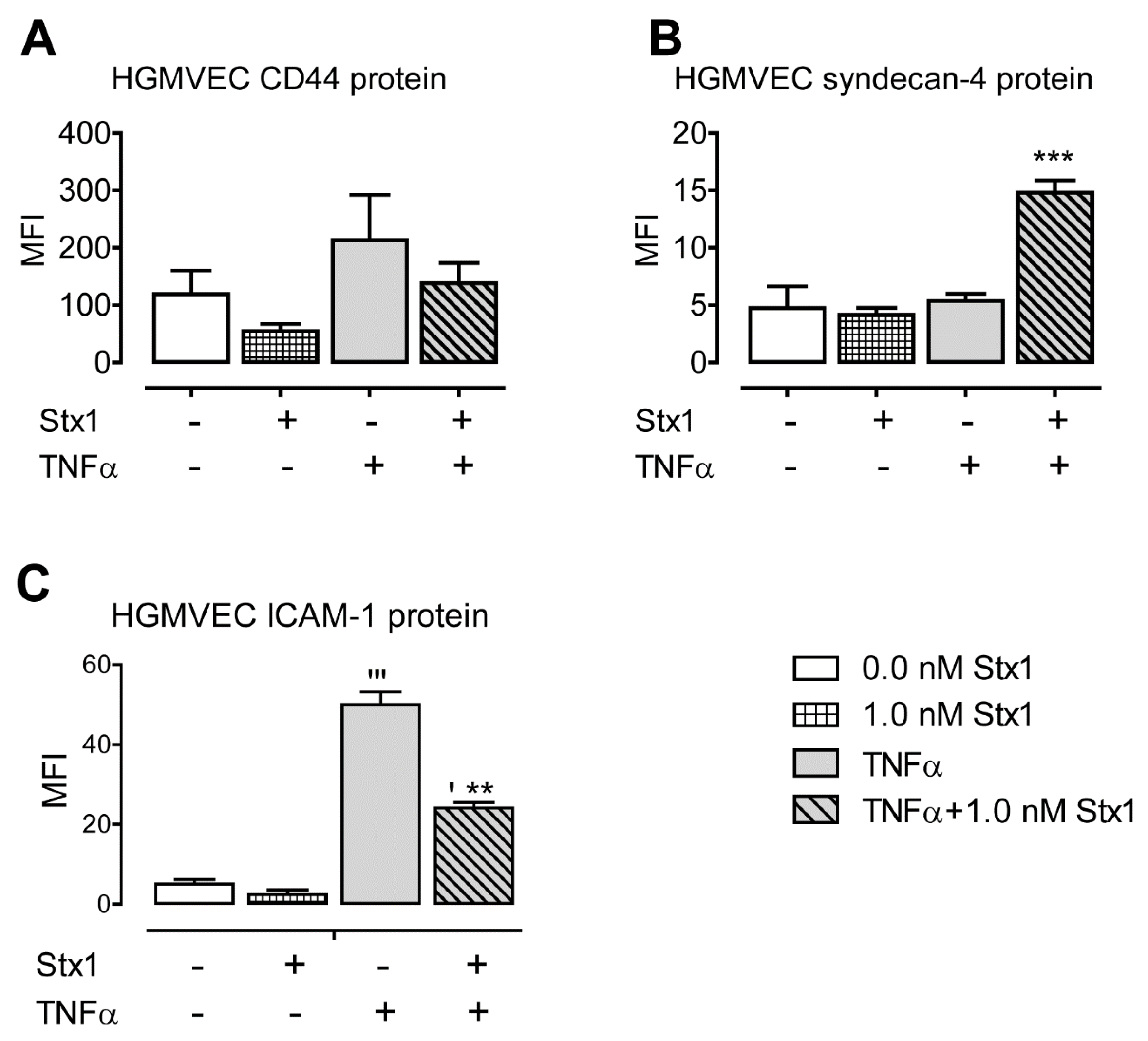 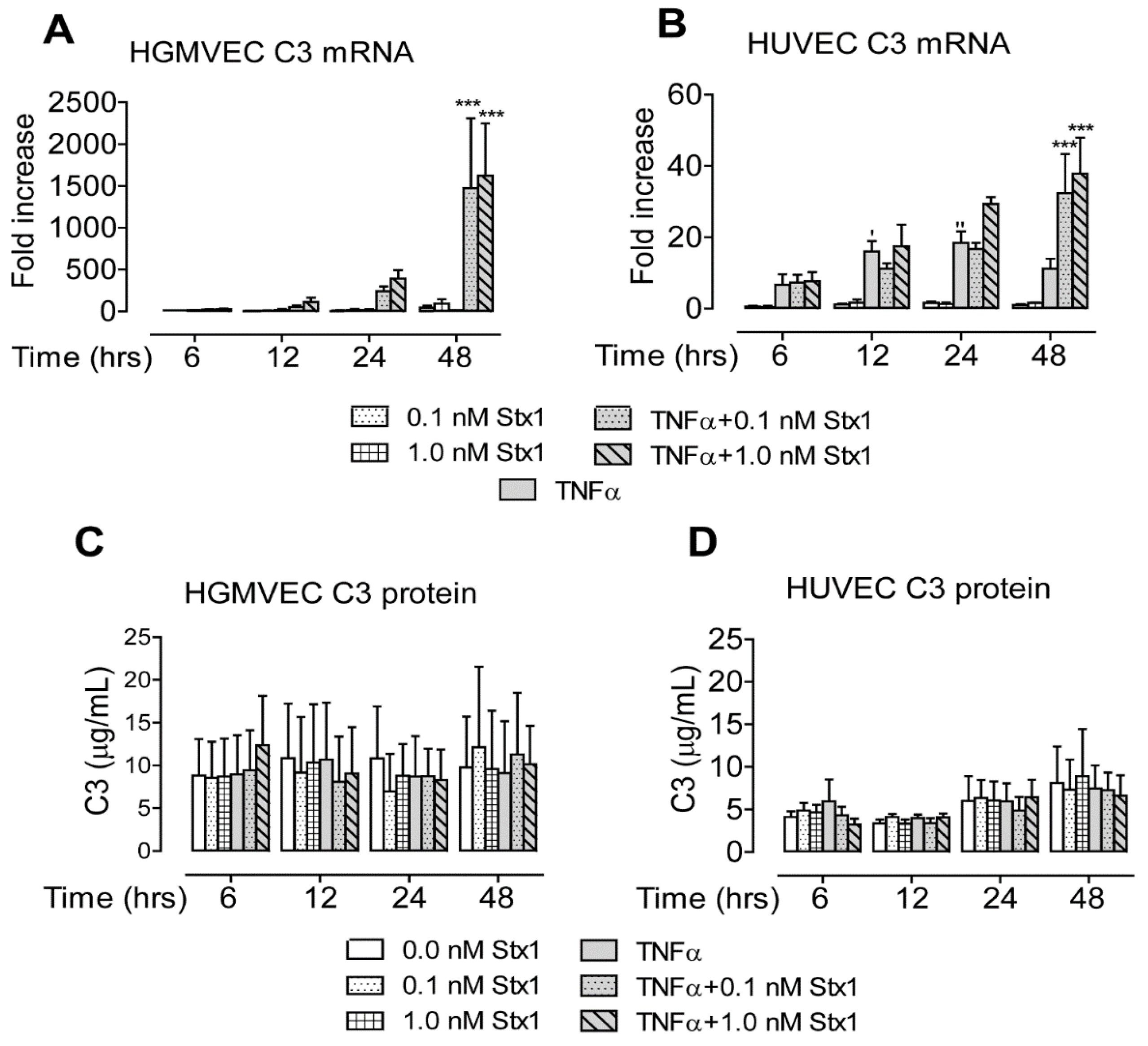