The Effect of Zearalenone on the Cytokine Environment, Oxidoreductive Balance and Metabolism in Porcine Ileal Peyer’s Patches
Previous Article in Journal

Prokaryotes represent a source of both biotechnological and pharmaceutical molecules of importance, such as nonribosomal peptides (NRPs). NRPs are secondary metabolites which their synthesis is independent of ribosomes. Traditionally, obtaining NRPs had focused on organisms from terrestrial environments, but in recent years marine and coastal environments have emerged as an important source for the search and obtaining of nonribosomal compounds. In this study, we carried out a metataxonomic analysis of sediment of the coast of Yucatan in order to evaluate the potential of the microbial communities to contain bacteria involved in the synthesis of NRPs in two sites: one contaminated and the other conserved. As well as a metatranscriptomic analysis to discover nonribosomal peptide synthetases (NRPSs) genes. We found that the phyla with the highest representation of NRPs producing organisms were the Proteobacteria and Firmicutes present in the sediments of the conserved site. Similarly, the metatranscriptomic analysis showed that 52% of the sequences identified as catalytic domains of NRPSs were found in the conserved site sample, mostly (82%) belonging to Proteobacteria and Firmicutes; while the representation of Actinobacteria traditionally described as the major producers of secondary metabolites was low. It is important to highlight the prediction of metabolic pathways for siderophores production, as well as the identification of NRPS’s condensation domain in organisms of the Archaea domain. Because this opens the possibility to the search for new nonribosomal structures in these organisms. This is the first mining study using high throughput sequencing technologies conducted in the sediments of the Yucatan coast to search for bacteria producing NRPs, and genes that encode NRPSs enzymes. View Full-Text
Keywords: nonribosomal peptides; metataxonomic; metatranscriptomic; Yucatan coast nonribosomal peptides; metataxonomic; metatranscriptomic; Yucatan coast
►▼ Show Figures 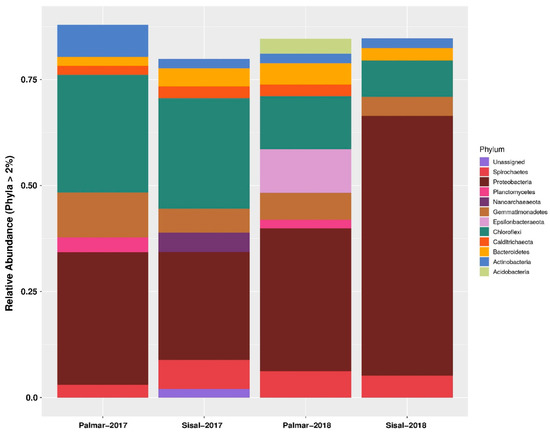