Human Botulism in France, 1875–2016
Next Article in Special Issue

Simultaneous Determination of Deoxynivalenol, Its Modified Forms, Nivalenol and Fusarenone-X in Feedstuffs by the Liquid Chromatography–Tandem Mass Spectrometry Method
Previous Article in Journal

Food and crop contaminations with mycotoxins are a severe health risk for consumers and cause high economic losses worldwide. Currently, different chromatographic- and immuno-based methods are used to detect mycotoxins within different sample matrices. There is a need for novel, highly sensitive detection technologies that avoid time-consuming procedures and expensive laboratory equipment but still provide sufficient sensitivity to achieve the mandated detection limit for mycotoxin content. Here we describe a novel, highly sensitive, and portable aflatoxin B1 detection approach using competitive magnetic immunodetection (cMID). As a reference method, a competitive ELISA optimized by checkerboard titration was established. For the novel cMID procedure, immunofiltration columns, coated with aflatoxin B1-BSA conjugate were used for competitive enrichment of biotinylated aflatoxin B1-specific antibodies. Subsequently, magnetic particles functionalized with streptavidin can be applied to magnetically label retained antibodies. By means of frequency mixing technology, particles were detected and quantified corresponding to the aflatoxin content in the sample. After the optimization of assay conditions, we successfully demonstrated the new competitive magnetic detection approach with a comparable detection limit of 1.1 ng aflatoxin B1 per mL sample to the cELISA reference method. Our results indicate that the cMID is a promising method reducing the risks of processing contaminated commodities.
Keywords: frequency mixing technology; immunofiltration; magnetic beads; mycotoxin frequency mixing technology; immunofiltration; magnetic beads; mycotoxin

As a reference method to novel cMID, a cELISA was established using optimized conditions defined by checkerboard titration. Here, aflatoxin B1-BSA conjugate was coated, followed by the application of aflatoxin B1-specific monoclonal antibodies pre-incubated with soluble aflatoxin B1 with concentrations ranging from 0.006 ng·mL−1 to 5000 ng·mL−1 sample buffer. Absorbance was measured at 405 nm by indirect readout using a secondary antibody conjugated to horseradish peroxidase (HRPO) targeting mouse antibodies and application of respective substrate.

To identify the optimal assay parameters, calibration experiments were performed with the previously most promising combinations of AFB1-BSA coating and aflatoxin B1-specific monoclonal antibody AFB1_002 concentrations (Figure 3). Free aflatoxin B1 was used as a competitor, dilutions ranging from 0.006 ng·mL−1 to 50,000 ng·mL−1. The combination of 0.2 µg·mL−1 coating and 150 ng·mL−1 antibody resulted in the highest sensitivity in combination with stable data behavior. Corresponding IC50 and Limit of Detection (LOD) values of all four combinatorial experiments are shown in Table 1. Although antibody concentrations below 75 ng·mL−1 should theoretically lead to a higher sensitivity, this was actually not observed due to divergent measuring values and thus a non-reliable assay procedure under these conditions (compare 0.4 µg·mL−1 coating and 75 ng·mL−1 mAb). Furthermore, reducing the amount of mAb resulted in a twofold increase of readout time from approximately 10 min to more than 20 min (data not shown).
Considering the reliability of the developed cELISA, a further repetition of the best-paired concentration setting, as shown in Table 1, was done. Results yielded in an averaged IC50 value of 3.79 ng·mL−1 and an averaged LOD of 0.39 ng·mL−1, as shown in Figure 4. Those sensitivity values obtained by our ELISA setup were used as a reference for competitive magnetic immunodetection development.

Once the optimal ratio of assay reagents of 2 µg·mL−1 of the coating antigen and 2.5 µg·mL−1 of mycotoxin-specific antibody in combination with 80 µg·mL−1 magnetic particles was determined based on the above-shown experiments, cMID calibration experiments for the detection of aflatoxin B1 were performed, see Figure 6A. For this, samples with serially diluted free AFB1 in the range of 0.006 ng·mL−1 to 50,000 ng·mL−1 were prepared. After adding biotinylated mAb to various dilutions of the analyte, a pre-incubation of one hour was done for a complete capturing of mycotoxins. Subsequently, the reaction mixture was applied onto AFB1-BSA coated and blocked columns. Afterward, 700 nm diameter magnetic particles functionalized with streptavidin at the above-determined optimum concentration of 80 µg·mL−1 were added. As shown in Figure 6A, the data show the expected reciprocal correlation of mycotoxin concentration and signal but with high variability of signals for dilutions in the low- ng·mL−1 range, which prevents a reliable determination of sensitivity parameters. We speculate that this observation could be caused by sterical hindrance within the polyethylene matrix due to the usage of big-sized particles, as can be seen in the standard deviation and data fluctuation with bead concentrations of 80 µg·mL−1 or higher (Figure 5). Based on these findings, the assay was repeated with the same parameters except the size of beads used. For this, tenfold smaller magnetic particles were used (70 nm) in order to avoid steric hindrance. As shown in Figure 6B, the use of smaller particles results in an approximately tenfold increased detection signal of roughly 600 mV with reduced variability. With this adapted assay procedure, IC50 values of 5.4 ng·mL−1 and a LOD of 1.1 ng·mL−1 were determined, which is in the same sensitivity range as the cELISA (Figure 4).

The most suitable aflatoxin B1-BSA coating concentrations for a competitive ELISA protocol in combination with appropriate anti-aflatoxin B1 monoclonal antibody concentrations were determined by checkerboard titration. Throughout the following protocol, all incubation steps were performed at room temperature for one hour in the dark. For coating varying concentrations of AFB1-BSA, the antigen was diluted in a coupling buffer, and 100 µL per well was added to a 96-well highbinding microtiter plate (Greiner Bio-One) and incubated as mentioned above. After washing each well thrice with PBS-T, all wells were blocked using 200 µL of EBP and incubated. Then, the plate was washed again, and concentrations of monoclonal antibody ranging from 19.5 ng·mL−1 up to 1250 ng·mL−1, diluted in PBS, were added. After another washing step, as described above, 100 µL of secondary antibody goat anti-mouse IgG-HRPO, diluted 1:10,000 in PBS was added to each well and incubated. Prior to readout with 100 µL of 1 mg·mL−1 ATBS substrate in ABTS buffer, the plate was washed again. Absorption was measured at 405 nm after 10 min incubation in the dark.

For competitive ELISA procedure, AFB1-BSA conjugate was diluted in coupling buffer and plated with 100 µL per well onto a high binding 96-well microtiter plate. As mentioned in Section 4.2, all incubation steps were performed at room temperature for one hour in the dark. After the washing step with PBS-T, each well was blocked with EBP and incubated. Meanwhile, pre-incubation of free aflatoxin B1with the monoclonal anti-aflatoxin B1 antibody was prepared. For this, 75 µL of a serial dilution of aflatoxin B1 in PBS was prepared, and then 75 µL of antibody solution diluted in PBS was added and incubated. After washing the blocked assay plate three times with PBS-T, 100 µL of pre-incubated samples were transferred to each well, respectively. After incubation, the plate was washed three times with PBS-T. Subsequently, 100 µL of conjugated goat anti-mouse IgG-HRPO secondary antibody, diluted 1:10,000 in PBS was added to each well and incubated. After washing three times with PBS-T, 100 µL of 1 mg·mL−1 ABTS substrate in ABTS buffer was added, and absorbance was measured at 405 nm after 15 min incubation in the dark.

The equilibration of immunofiltration columns was done, as described by Rettcher et al. (2015) [26]. In brief, after degassing in 96% (v/v) ethanol in a desiccator at –0.8 bar pressure, columns were washed sequentially with 750 µL 50% (v/v) ethanol-water, 750 µL water and twice 750 µL coupling buffer. Afterward, for coupling of aflatoxin B1-BSA conjugate to the matrix, the conjugate was applied to the column in gravity flow diluted in 500 µL coupling buffer and incubated for one hour at room temperature in dark surrounding. For checkerboard titration, a coating concentration, as shown in Figure A2, was used. For the bead-response curve, a coating concentration of 2 µg·mL−1 was applied, as well as for cMID assays. Subsequent washing of the columns was performed twice with 750 µL PBS. Remaining binding sites were blocked by applying twice 750 µL of MID-BP. After the first 750 µL flushed through the column by gravity flow, an incubation time of 5 min was set. After the second time, columns were incubated for further 30 min after they were washed again twice with PBS.
After equilibration or blocking, columns can be stored in the coupling buffer or PBS, respectively, at 4 °C for at least 14 days. In this study, a maximum storage time of one day was used.

4.5. Biotinylation of Anti-Aflatoxin B1 Monoclonal Antibody

For biotinylation of antibodies, the EZ-Link™ NHS-PEG4 Biotinylation Kit was used as described by the manufacturer’s instruction.

After coating and blocking of immunofiltration columns, 500 µL samples of biotinylated antibody, diluted in PBS to various final concentrations between 0.3 µg·mL−1 and 10 µg·mL−1, were applied and incubated for one hour at room temperature. Afterward, a washing step was performed by rinsing two times 750 µL PBS through the column. Subsequently, for checkerboard titration, 500 µL of 180 µg·mL−1 700 nm magnetic beads suspension in PBS (pH 7.4) was added and flushed through by gravity flow. For bead response analysis, various concentrations of 700 nm magnetic beads were applied. Another washing step, as described above, was performed. For readout, columns were inserted into the portable magnetic reader and the measuring signal in mV was detected, as previously described in Rettcher et al. (2015) [26].

For cMID calibration curve experiments, a pre-incubation of free mycotoxin and biotinylated antibody was performed. For this, serially diluted aflatoxin B1 samples in PBS, with concentrations ranging from 0.006 ng·mL−1 to 100,000 ng·mL−1, were mixed 1:1 with 225 µL biotinylated antibody, also diluted in PBS. After incubation of one hour at room temperature in a dark surrounding, 500 µL of each sample was applied on coated and blocked columns and also incubated as mentioned above. After washing each column twice with 750 µL PBS, 80 µg·mL−1 of 70 nm or 700 nm magnetic particles were applied and incubated, as mentioned before. After washing twice, the readout was done as described above.

For competitive ELISA as well as for competitive magnetic immunodetection and data analysis, a Hill Slope fit was done with GraphPad Prism 8.0.0. The following formulas were used to determine the LOD on the signal and on the concentration scale:

This research was funded by the land North Rhine-Westphalia and the European Regional Development Fund (ERDF; German: EFRE) under grant number EFRE-0801298, reference number LS-2-1-014 and The APC was funded by Fraunhofer IME.

The authors would like to thank Stefan Rasche for his helpful advices and support given in discussions. 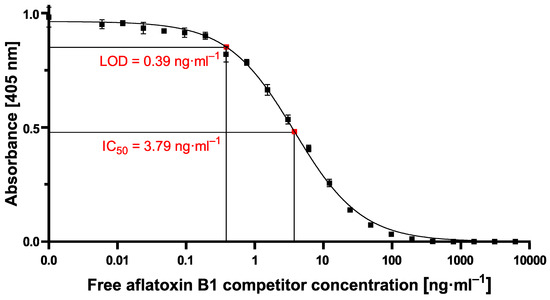 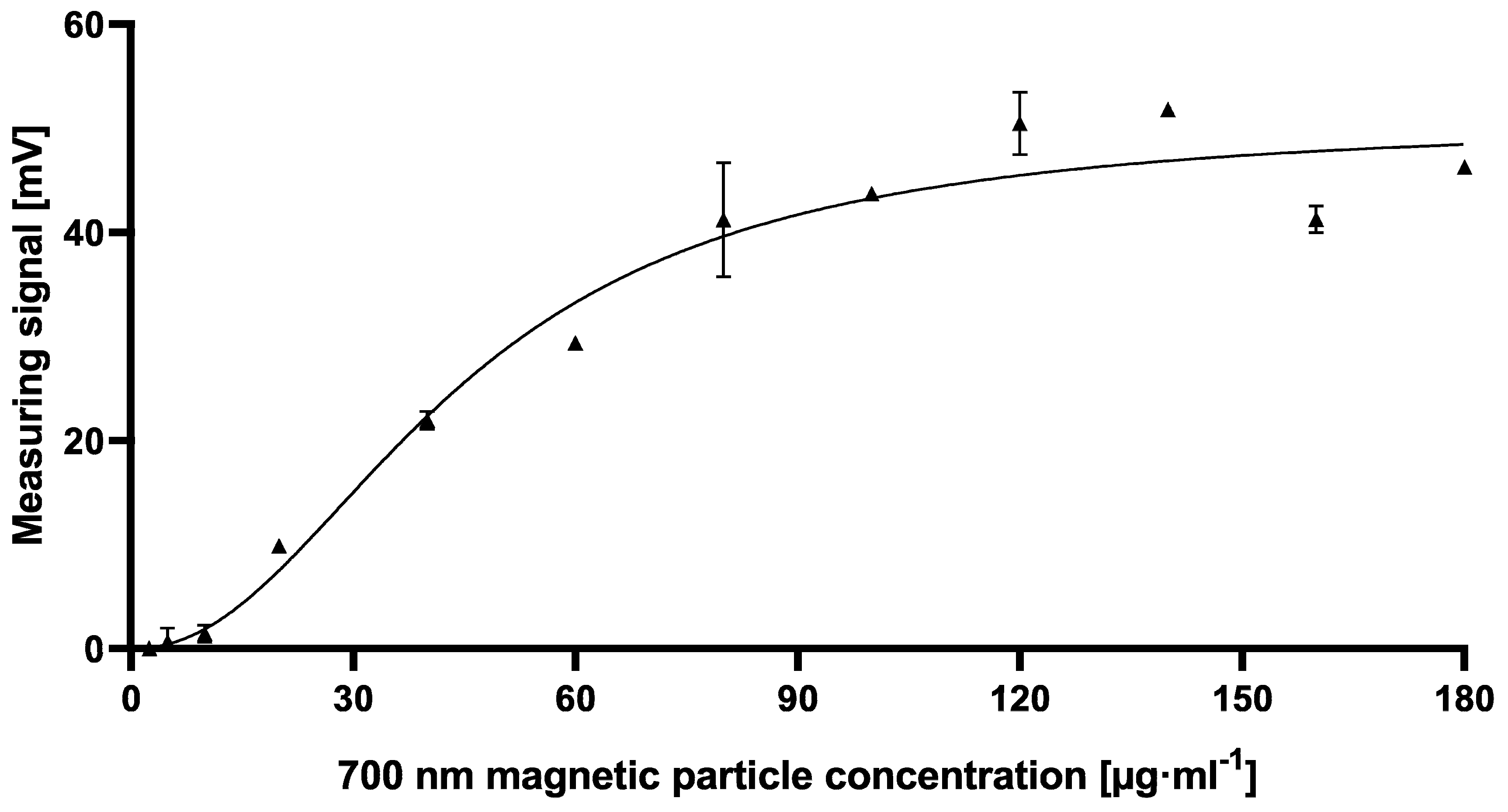