Culture methods supplemented with high-performance liquid chromatography (HPLC) technique provide a rapid and simple tool for detecting levels of aflatoxins (AFs) produced by fungi. This study presents a robust method for simultaneous quantification of aflatoxin (AF) B1, B2, G1, and G2 levels in several fungal cultivation states: submerged shake culture, liquid slant culture, and solid-state culture. The recovery of the method was evaluated by spiking a mixture of AFs at several concentrations to the test medium. The applicability of the method was evaluated by using aflatoxigenic and non-aflatoxigenic Aspergilli. A HPLC coupled with the diode array (DAD) and fluorescence (FLD) detectors was used to determine the presence and amounts of AFs. Both detectors showed high sensitivity in detecting spiked AFs or AFs produced in situ by toxigenic fungi. Our methods showed 76%–88% recovery from medium spiked with 2.5, 10, 50, 100, and 500 ng/mL AFs. The limit of quantification (LOQ) for AFs were 2.5 to 5.0 ng/mL with DAD and 0.025 to 2.5 ng/mL with FLD. In this work, we described in detail a protocol, which can be considered the foremost and only verified method, to extract, detect, and quantify AFs employing both aflatoxigenic and non-toxigenic Aspergilli. View Full-Text
Keywords: aflatoxins; laboratory culture; extraction; HPLC; recovery; detection limits aflatoxins; laboratory culture; extraction; HPLC; recovery; detection limits
►▼ Show Figures 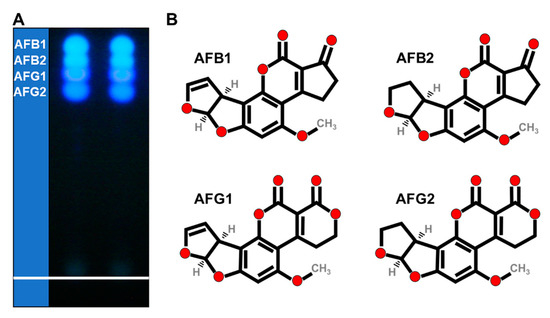