Cysteine-Rich Secretory Proteins (CRISPs) from Venomous Snakes: An Overview of the Functional Diversity in a Large and Underappreciated Superfamily
Previous Article in Journal

Enterohepatic Helicobacters, such as Helicobacter hepaticus and Helicobacter pullorum, are associated with several intestinal and hepatic diseases. Their main virulence factor is the cytolethal distending toxin (CDT). In the present study, whole genome microarray-based identification of differentially expressed genes was performed in vitro in HT-29 intestinal cells while following the ectopic expression of the active CdtB subunit of H. hepaticus CDT. A CdtB-dependent upregulation of the V-maf musculoaponeurotic fibrosarcoma oncogene homolog B (MAFB) gene encoding the MAFB oncoprotein was found, as well as the CdtB-dependent regulation of several MAFB target genes. The transduction and coculture experiments confirmed MAFB mRNA and protein induction in response to CDT and its CdtB subunit in intestinal and hepatic cell lines. An analysis of MAFB protein subcellular localization revealed a strong nuclear and perinuclear localization in the CdtB-distended nuclei in intestinal and hepatic cells. MAFB was also detected at the cell periphery of the CdtB-induced lamellipodia in some cells. The silencing of MAFB changed the cellular response to CDT with the formation of narrower lamellipodia, a reduction of the increase in nucleus size, and the formation of less γH2AX foci, the biomarker for DNA double-strand breaks. Taken together, these data show that the CDT of enterohepatic Helicobacters modulates the expression of the MAFB oncoprotein, which is translocated in the nucleus and is associated with the remodeling of the nuclei and actin cytoskeleton. View Full-Text
Keywords: Helicobacter hepaticus; Helicobacter pullorum; CdtB subunit; cytolethal distending toxin; MAFB oncoprotein Helicobacter hepaticus; Helicobacter pullorum; CdtB subunit; cytolethal distending toxin; MAFB oncoprotein
►▼ Show Figures 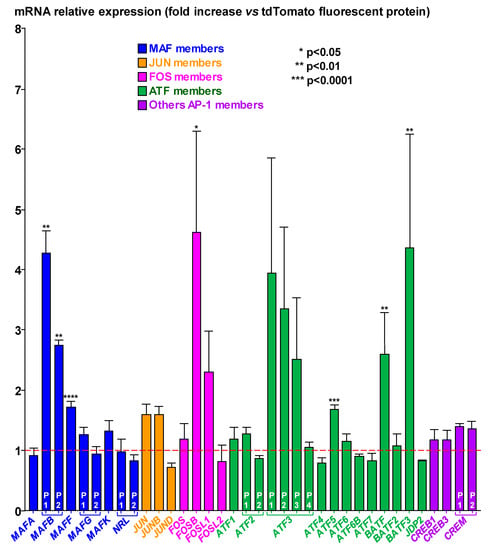