Botulinum Toxin: An Update on Pharmacology and Newer Products in Development
Previous Article in Journal

Botulinum Toxin in the Treatment of Headache

Essential tremor (ET), a common movement disorder affecting 4.6% of individuals ≥65 years of age [1], is characterized by uncontrollable trembling of the upper limbs [2]. Other areas, including the head, face, jaw, and vocal cords, can also be affected [2,3,4]. ET can significantly impair activities of daily living (ADL) [3,5].
Treatment is based on severity and impact on the quality of life [5]. Propranolol and primidone, the most commonly used therapies, reduce tremor amplitude by ~50% [2]. However, approximately 30–70% of patients fail to respond, and side effects are relatively common [2,6].
Two placebo-controlled studies evaluated botulinum neurotoxin type A (BoNT-A; onabotulinumtoxinA) in patients with hand ET [7,8]. The first study randomized 133 patients to onabotulinumtoxinA 50 U, 100 U or placebo injected into wrist muscles (flexor carpi radialis and ulnaris, extensor carpi radialis and ulnaris) for 16 weeks [7]. The authors reported a significant reduction in postural tremor with onabotulinumtoxinA versus placebo at 6, 12 and 16 weeks and in kinetic tremor at 6 weeks using a tremor severity rating scale; however, grip strength significantly reduced with onabotulinumtoxinA versus placebo, hand weakness was reported as an adverse event by half of the patients overall, and only minimal changes in motor function and functional disability occurred. The second study randomized 25 patients to onabotulinumtoxinA 50 U or placebo into the same wrist muscles as the first study for 16 weeks [8]. The authors reported a significant reduction in postural tremor by Week 4, which was maintained for the duration of the study; similar to the first study, finger weakness was reported by up to half of patients receiving onabotulinumtoxinA versus none receiving placebo, and functional rating scales did not significantly improve with onabotulinumtoxinA. Due to concerns of increased risk of hand or finger muscle weakness [7,8], BoNT-A has not been widely adopted for ET. However, there is growing evidence that a more customized selection of muscles and doses reduces muscle weakness and improves activities of daily living and quality of life of patients with ET [9,10,11,12].
Characterization of movement is important for selecting BoNT-A dose and the muscles to be injected, and is difficult to define in the upper limb due to complex joint biomechanics [13]. Kinematic analysis to record the dynamics of movement is well established for analysis of upper-limb movement [14,15] and has demonstrated benefits in improving the outcome of BoNT-A treatment for upper-limb Parkinson’s disease tremor [13,16]. Two open-label single-site studies of incobotulinumtoxinA were conducted in patients with ET [12,17,18]. The first study enrolled 31 patients to receive three incobotulinumtoxinA injections over 30 weeks and captured upper limb kinematics using goniometers and a torsiometer at the forearm, wrist, elbow and shoulder joints; the computerized tremor analysis was used to aid and plan a customized dosing algorithm [12]. Tremor amplitude was significantly reduced as early as 6 weeks and maintained throughout the treatment course, with only mild but not bothersome hand weakness and a reduction in grip strength that did not substantially impact hand function [12]. The second study enrolled 24 patients to receive up to six incobotulinumtoxinA treatments for up to 96 weeks [17,18]. Motion sensor devices on the forearm, wrist, elbow and shoulder captured tremor severity, and were used to select the most appropriate muscles for injection. A significant decline in tremor severity was reported as early as 6 weeks and maintained throughout the study course; perceived muscle weakness was not long-lasting, and the vast majority of patients experienced a functional benefit from treatment [17,18]. The present study investigated whether this promising approach was reproducible under placebo-controlled conditions in a multicenter setting, with the objective of assessing the efficacy and safety of a single, kinematic planned intramuscular injection of incobotulinumtoxinA, compared with placebo, in moderate-to-marked ET of the upper limb.

Throughout the study, greater improvements in Fahn–Tolosa–Marin (FTM) tremor and Part B motor performance scores [19] were observed with incobotulinumtoxinA treatment versus placebo. There was a somewhat greater improvement from baseline in FTM tremor score in the incobotulinumtoxinA group versus placebo at Weeks 4 and 8, but the difference between the treatment groups was statistically significant favoring incobotulinumtoxinA at Week 8 only, when looking at the 95% confidence intervals based on the t-distribution [−3.1; −0.1], and not for Week 4 [−2.9; 0.0]. The sensitivity analysis of covariance (ANCOVA) did not show statistically significant differences at Week 4 (p = 0.159) or Week 8 (p = 0.087) (Figure 2A). A statistically significantly greater improvement from baseline in FTM Part B motor performance score was seen with incobotulinumtoxinA versus placebo at Weeks 4 and 8 (sensitivity ANCOVA; Week 4: least squares (LS) mean difference −2.3 [95% CI: −3.8, −0.9], p = 0.003; Week 8: LS mean difference −1.6 [95% CI: −3.0, −0.2], p = 0.031) (Figure 2B). Only two patients in each treatment group had their non-dominant hand treated, and a subgroup analysis (dominant hand only vs. non-dominant hand only) confirmed the results of the FTM Part B motor performance score analysis.

The physician-rated global impression of change scale (GICS) scores indicated statistically significantly greater improvement in the incobotulinumtoxinA group versus placebo at Week 4 (95% CI: 0.2, 1.3; p < 0.05 based on t-distribution for the treatment; Figure S1), but there were no significant differences at any other timepoint. A somewhat greater improvement with incobotulinumtoxinA versus placebo was observed for patient-rated GICS at Week 4, but this was not statistically significant (95% CI: −0.2, 0.8; p > 0.05; Table S1).

This double-blind, exploratory, placebo-controlled study adds further evidence that customized incobotulinumtoxinA dosing is well tolerated and effective for the treatment of ET, with treatment effects lasting at least up to 24 weeks. The study showed that tremor kinematic analytics (TremorTek®) technology could be successfully adopted in other clinical sites. A confirmatory long-term study is planned to investigate the efficacy and tolerability of customized incobotulinumtoxinA injections for the treatment of ET in a larger patient population, and to further elucidate the usefulness of kinematic planning technology.

This trial was a prospective, randomized, double-blind, placebo-controlled, parallel-group, multicenter, exploratory study in patients with upper-limb ET (NCT02207946). Patients were enrolled from December 2014 to April 2016 by six investigators in Canada and the United States (US) (at Medicine Professional Corporation, Toronto, ON, Canada; Movement Disorders Clinic, Toronto Western Hospital, Toronto, ON, Canada; Movement Disorder Clinic, Winnipeg, MB, Canada; David King, Inc., Halifax, NS, Canada; Mount Sinai Medical Center, New York, NY, USA).
Eligible patients were adults with a first onset of ET ≥6 months before screening and with stability of symptoms over 4 weeks; whose diagnosis of “definite ET” was otherwise in accordance with the Tremor Investigation Group criteria applicable at the time [23] (bilateral postural tremor with/without kinetic tremor, involving hands and forearms, that was visible and persistent); moderate-to-marked upper-limb postural and/or kinetic tremor at wrist level (FTM Part C, items 17–23) in the limb to be treated, with a rating of ≥2 in at least two categories; visible tremor at wrist level in at least one of the four positions/tasks used in kinematic assessment; tremor deemed by the investigator to require treatment with a total dose of 30–200 U incobotulinumtoxinA for up to 3 joints (wrist joint mandatory; shoulder and elbow joints optional); and receiving concomitant anti-tremor medication, if any, at a stable dose (≥4 weeks before screening and until the study end). Principal exclusion criteria are listed in the supplementary materials.

Patients were randomized 2:1 to receive, in a single treatment cycle, unilateral, intramuscular injections of incobotulinumtoxinA (total dose 30–200 U), or an equivalent volume of placebo, into muscles of the wrist (mandatory) and, optionally, into the elbow and/or shoulder, of the limb that (in the patient’s opinion) had the greatest impact on their ADL (the doses received are shown in Table 2). Injections were guided using ultrasound, electromyography, and/or electrical nerve stimulation as determined by the investigator. Injections were conducted by experienced investigators familiar with the Pictorial Atlas of Botulinum Toxin Injection: Dosage, Localization, Application by Jost [24].
The treatment planning for muscles to be treated was based on kinematic tremor analysis using the tremor kinematic analytics investigational device, and followed kinematic tremor procedures as previously described [17,18] (this technology is pending regulatory approval, and is available to clinical investigators for research purposes from the corresponding author). The customized treatment pattern for total dose and dosing regimen was based on kinematic tremor analysis; however, this clinical decision algorithm could be modified at the investigator’s discretion. Patients were monitored regularly over 24 weeks, including telephone contact 1 week post-injection and clinic visits every 4 weeks until the end-of-study visit at Week 24.

The maximum log-transformed accelerometric tremor amplitude at the hand and the RMS angular tremor amplitude at the shoulder, elbow, forearm, and wrist of the injected limb were measured by kinematic tremor analysis at the screening and baseline visits, and every 4 weeks from Week 4 to Week 24 post-injection. The analysis was conducted as described previously [16,17].

The physicians’ and patients’ GIC were assessed using the GICS, a 7-point Likert scale [25] from −3 (very much worse) to +3 (very much improved) every 4 weeks from Week 4 to Week 24 post-injection.

Maximum grip strength (kg) was measured for both hands using a hand-held dynamometer. Details of additional safety assessments (MRC MMT and self-perceived weakness) are presented in the supplementary materials.

No formal sample size calculation was performed, and all analyses were exploratory. Two-sided 95% CIs (based on the t-distribution) were calculated for the change from baseline and for treatment differences for efficacy variables. The treatment groups were compared using sensitivity ANCOVA, mixed model repeated measures (MMRM), and the Wilcoxon rank-sum test, using observed cases. Descriptive p-values from ANCOVA, MMRM, and the Wilcoxon rank-sum test were provided as appropriate.
Efficacy analyses were based on the full analysis set (all treated patients with a post-baseline value for any efficacy variable) and on the per-protocol population (patients in the full analysis set, for whom no major protocol violations were recorded) for the sensitivity analysis. Safety data were based on the safety evaluation set (all patients who received study medication) and summarized descriptively. Statistical analyses were performed using SAS® version 9.2 (SAS Institute, Cary, NC, USA).

The study was conducted in accordance with the International Conference on Harmonization Guidelines, applicable regulations, and the principles of the Declaration of Helsinki. The study protocol was reviewed by an independent ethics committee or institutional review board at each study site. The study was approved by the: Western Institutional Review Board, Puyallup, WA, Canada; University Health Network Research Ethics Board, Toronto, Canada; University of Manitoba Bannatyne Campus Research Ethics Board, Manitoba, Canada; and BRANT IRB Accreditation Consulting Services, Lake Success, New York, NY, USA (further details in Table S5). All patients provided written informed consent.

Medical writing support, under the direction of the authors, was provided by CMC Connect, Mc-Cann Health Medical Communications, and was funded by Merz Pharmaceuticals GmbH, Frankfurt am Main, Germany, in accordance with Good Publication Practice (GPP3) guidelines.

The authors wish to thank the patients and all study investigators who contributed to this study.

Information on this study is available to researchers and can be found in the clinicaltrials.gov record (NCT02207946). All relevant data are within this paper and its online supplementary material files. 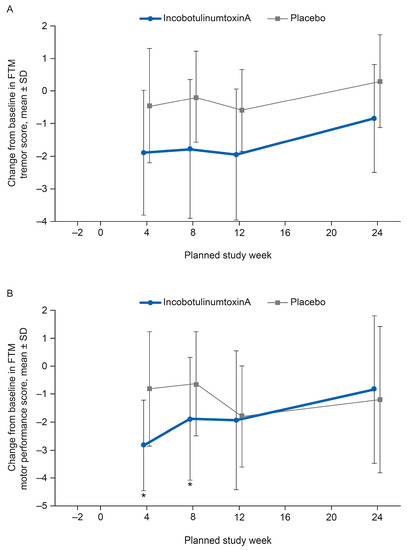 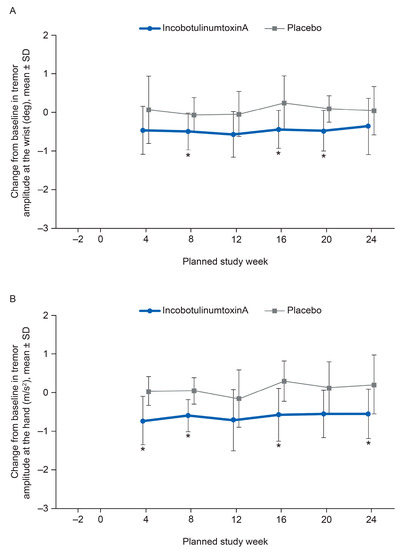 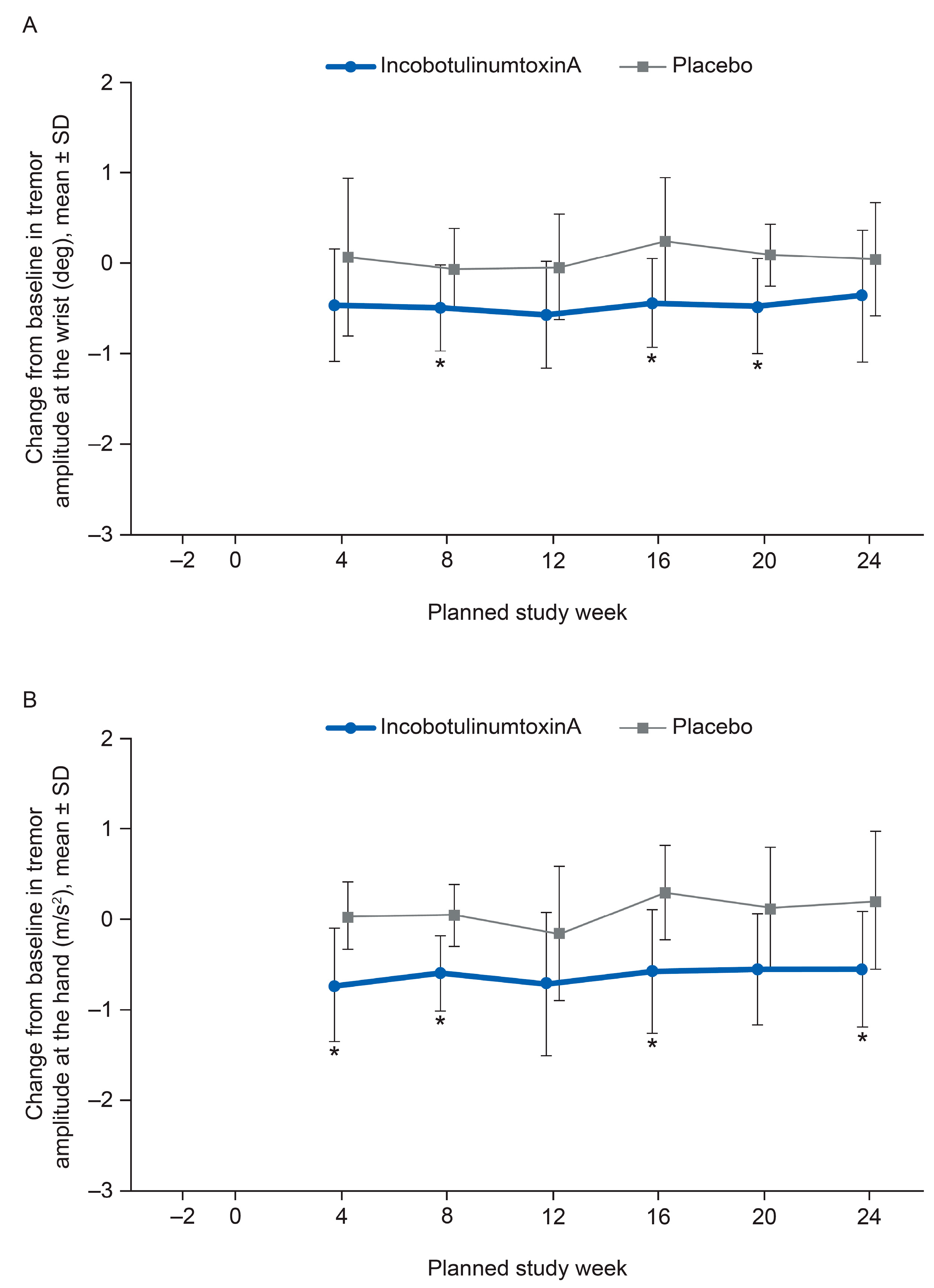 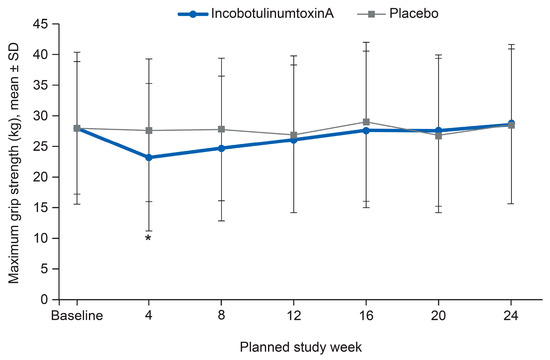