Prevalence, Genotypic and Phenotypic Characterization and Antibiotic Resistance Profile of Clostridium perfringens Type A and D Isolated from Feces of Sheep (Ovis aries) and Goats (Capra hircus) in Punjab, Pakistan
Next Article in Special Issue

Immunoassays are developed based on antigen–antibody interactions. A mimotope is an effective recognition receptor used to study the mechanism of action of antigens and antibodies, and is used for improving the sensitivity of the antibody. In this study, we built a 3D structure of the citrinin (CIT) mimotope X27 and anti-CIT single-chain antibody fragment (ScFv) through a “homologous modeling” strategy. Then, CIT and X27 were respectively docked to anti-CIT ScFv by using the “molecular docking” program. Finally, T28, F29, N30, R31, and Y32 were confirmed as the key binding sites in X27. Furthermore, the result of the phage-ELISA showed that the mutational phage lost the binding activity to the anti-CIT ScFv when the five amino acids were mutated to “alanine”, thereby proving the correctness of the molecular docking model. Lastly, a site-directed saturation strategy was adopted for the sites (T28, F29, N30, R31, and Y32). Eighteen different amino acids were introduced to each site on average. The activities of all mutants were identified by indirect competitive ELISA. The sensitivities of mutants T28F, T28I, F29I, F29V, N30T, and N30V were 1.83-, 1.37-, 1.70-, 2.96-, 1.31-, and 2.01-fold higher than that of the wild-type, respectively. In conclusion, the binding model between the CIT and antibody was elaborated for the first time based on the mimotope method, thereby presenting another strategy for improving the sensitivity of citrinin detection in immunoassays. View Full-Text
Keywords: citrinin; mimotope; molecular docking; site-directed saturation; indirect competitive ELISA citrinin; mimotope; molecular docking; site-directed saturation; indirect competitive ELISA
►▼ Show Figures 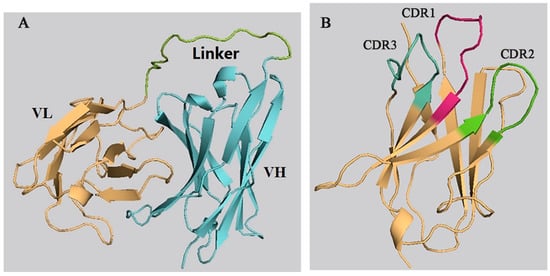