Role of Shiga Toxins in Cytotoxicity and Immunomodulatory Effects of Escherichia coli O157:H7 during Host-Bacterial Interactions in vitro
Next Article in Special Issue

To identify and compare venom components and expression patterns, venom gland-specific transcriptome analyses were conducted for 14 Aculeate bees and wasps. TPM (transcripts per kilobase million) values were normalized using the average transcription level of a reference housekeeping gene (dimethyladenosine transferase). Orthologous venom component genes across the 14 bee and wasp species were identified, and their relative abundance in each species was determined by comparing normalized TPM values. Based on signal sequences in the transcripts, the genes of novel venom components were identified and characterized to encode potential allergens. Most of the allergens and pain-producing factors (arginine kinase, hyaluronidase, mastoparan, phospholipase A1, phospholipase A2, and venom allergen 5) showed extremely high expression levels in social wasps. Acid phosphatase, neprilysin, and tachykinin, which are known allergens and neurotoxic peptides, were found in the venom glands of solitary wasps more often than in social wasps. In the venom glands of bumblebees, few or no transcripts of major allergens or pain-producing factors were identified. Taken together, these results indicate that differential expression patterns of the venom genes in some Aculeate species imply that some wasps and bumblebee species have unique groups of highly expressed venom components. Some venom components reflected the Aculeate species phylogeny, but others did not. This unique evolution of specific venom components in different groups of some wasps and bumblebee species might have been shaped in response to both ecological and behavioral influences. View Full-Text
Keywords: venom; social wasp; solitary hunting wasp; bumblebee; venom gland; transcriptome analysis venom; social wasp; solitary hunting wasp; bumblebee; venom gland; transcriptome analysis
►▼ Show Figures 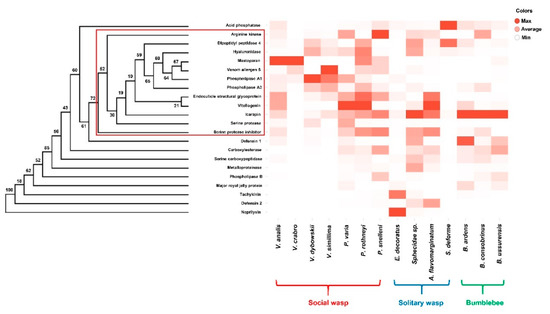