Avian botulism is a serious neuroparalytic disease mainly caused by a type C/D botulinum neurotoxin produced by Clostridium botulinum group III, one of the entwined bacterial species from the Clostridium novyi sensu lato genospecies. Its isolation is very challenging due to the absence of selective media and the instability of the phage carrying the gene encoding for the neurotoxin. The present study describes the development of an original method for isolating C. botulinum group III strains. Briefly, this method consists of streaking the InstaGene matrix extraction pellet on Egg Yolk Agar plates and then collecting the colonies with lipase and lecithinase activities. Using this approach, it was possible to isolate 21 C. novyi sensu lato strains from 22 enrichment broths of avian livers, including 14 toxic strains. This method was successfully used to re-isolate type C, D, C/D, and D/C strains from liver samples spiked with five spores per gram. This method is cheap, user-friendly, and reliable. It can be used to quickly isolate toxic strains involved in avian botulism with a 64% success rate and C. novyi sensu lato with a 95% rate. This opens up new perspectives for C. botulinum genomic research, which will shed light on the epidemiology of avian botulism. View Full-Text
Keywords: Clostridium botulinum; isolation; botulism Clostridium botulinum; isolation; botulism
►▼ Show Figures 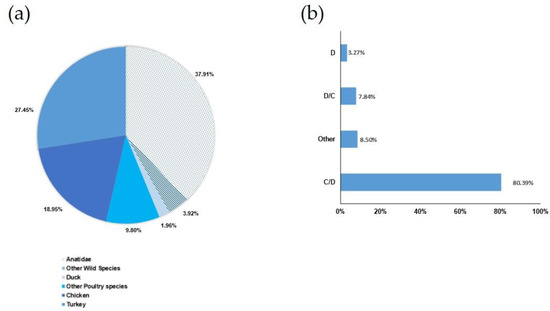