Natural Sources and Bioactivities of 2,4-Di-Tert-Butylphenol and Its Analogs
Previous Article in Special Issue

Looking for the X Factor in Bacterial Pathogenesis: Association of orfX-p47 Gene Clusters with Toxin Genes in Clostridial and Non-Clostridial Bacterial Species

Epsilon toxin (ETX), produced by Clostridium perfringens types B and D, causes serious neurological disorders in animals. ETX can bind to the white matter of the brain and the oligodendrocytes, which are the cells forming the myelin sheath around neuron axons in the white matter of the central nervous system. After binding to oligodendrocytes, ETX causes demyelination in rat cerebellar slices. We further investigated the effects of ETX on cerebellar oligodendrocytes and found that ETX induced small transmembrane depolarization (by ~ +6.4 mV) in rat oligodendrocytes primary cultures. This was due to partial inhibition of the transmembrane inward rectifier potassium current (Kir). Of the two distinct types of Kir channel conductances (~25 pS and ~8.5 pS) recorded in rat oligodendrocytes, we found that ETX inhibited the large-conductance one. This inhibition did not require direct binding of ETX to a Kir channel. Most likely, the binding of ETX to its membrane receptor activates intracellular pathways that block the large conductance Kir channel activity in oligodendrocyte. Altogether, these findings and previous observations pinpoint oligodendrocytes as a major target for ETX. This supports the proposal that ETX might be a cause for Multiple Sclerosis, a disease characterized by myelin damage. View Full-Text
Keywords: oligodendrocyte; epsilon toxin; multiple sclerosis; myelin; inward rectifying potassium channel; Clostridium perfringens oligodendrocyte; epsilon toxin; multiple sclerosis; myelin; inward rectifying potassium channel; Clostridium perfringens
►▼ Show Figures 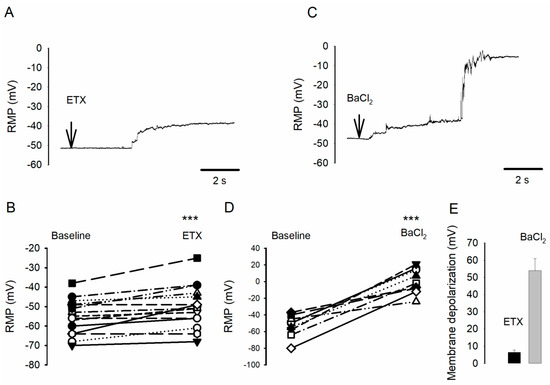