:
Microcystin-LR (MC-LR) poses a serious threat to human health due to its hepatotoxicity. However, the specific molecular mechanism of miRNAs in MC-LR-induced liver injury has not been determined. The aim of the present study was to determine whether miRNAs are regulated in MC-LR-induced liver toxicity by using high-throughput sequencing. Our research demonstrated that 53 miRNAs and 319 miRNAs were significantly changed after 24 h of treatment with MC-LR (50 and 200 μg/kg, respectively) compared with the control group. GO enrichment analysis revealed that these target genes were related to cellular, metabolic, and single-organism processes. Furthermore, KEGG pathway analysis demonstrated that the target genes of differentially expressed miRNAs in fish liver were primarily involved in the insulin signaling pathway, PPAR signaling pathway, Wnt signaling pathway, and transcriptional misregulation in cancer. Moreover, we hypothesized that 4 miRNAs (miR-16, miR-181a-3p, miR-451, and miR-223) might also participate in MC-LR-induced toxicity in multiple organs of the fish and play regulatory roles according to the qPCR analysis results. Taken together, our results may help to elucidate the biological function of miRNAs in MC-LR-induced toxicity.
Keywords:
Microcystin-LR; miRNA; Illumina sequencing; silver carp; hepatotoxicity
Key Contribution: Our results may help to elucidate the biological function of miRNAs in the toxicity of MC-LR. Meanwhile, we speculated that four miRNAs (miR-16, miR-181a-3p, miR-451, and miR-223) may be involved in MC-LR-induced toxicity.

Cyanobacteria are highly adaptable and widely distributed photosynthetic bacteria in almost all environments [1]. In the past several decades, global warming and overinvestment in nutrients have both led to the frequency and intensity of large algal blooms [2]. Cyanobacterial blooms in freshwater systems can produce multiply harmful cyanotoxins, particularly microcystins (MCs), which are mainly produced by bloom-forming Microcystis aeruginosa in freshwater. MCs are a group of potent toxins that become a threat to public health when cell-bound MCs are significantly released from the dying Microcystis into the water column [3]. MCs have at least 246 variants according to their chemical structure, a heptapeptide ring [4]. The most abundant, best known, and most studied congener MC form is microcystin-LR (MC-LR), which has leucine (L) and arginine (R) as variable amino acid residues [4,5]. The unique cyclic structure of MCs makes them less vulnerable to physical and chemical breakdown in natural environments, including sunlight, extreme pH, and high temperatures [6,7]. The frequent occurrence and accumulation of microcystins in drinking water poses a serious threat to human health [8]. After entering the human body, MCs bind to organic anion transporter polypeptides (OATPs), which inhibit the activities of protein phosphatases 1 and 2a, leading to phosphorylation disorders of their substrates [9]. Around the world, many large freshwater lakes and rivers are experiencing increasingly severe cyanobacterial blooms, such as Lake Erie and Monterey Bay in the USA [10,11], the southern Adriatic Sea in Italy [12], Lake Suwa in Japan [13], Tabocas Reservoir in Brazil [14], Lake Alexandrina in Australia [15], and Lakes Poyang [16], Chaohu [17], Dianchi [18], and Erhai [19] in China. MC-LR has been shown to be a tumor promoter that is fatal to animals and has been associated with the development of primary liver cancer in humans. Moreover, epidemiological investigations have found that chronic exposure to Microcystis is associated with increased rates of liver and colorectal cancer through consumption of contaminated drinking water and aquatic foods [20,21].
A class of naturally occurring small noncoding RNAs with lengths of 18–24 nucleotides (18–24 nt) are called microRNAs (miRNAs), which are produced by subsequent processing steps mediated by members of the RNase III family, Dicer, and Drosha proteins [22,23]. Cumulative studies have shown that miRNAs can control gene expression post-transcriptionally by binding to the 3’ UTR sequences of mRNAs and are implicated in many physiological processes, including apoptosis, immunoprotection, nervous system development, and cancer pathogenesis [24,25,26]. Recently, changes in miRNA expression in various cancers have been reported, and tissue miRNA profiles show strong potential for application in cancer definitions [27,28]. Recently, there have been increasing numbers of studies investigating the function of miRNA in MC-LR toxicity. The results of Xu et al. suggested that chronic MC-LR exposure alters the miRNA expression profile of WRL-68 cells and causes phenotypic transformation [29]. A report showed that miR-451a may protect against MC-LR-induced DNA damage by downregulating the expression of p-AKT1 [30]. In addition, previous studies have shown that the computational analysis of small RNA sequencing datasets is a powerful tool to identify miRNAs associated with MC-LR toxicity. For example, Li et al. identified MC-LR-induced female mammals’ reproductive toxicity-related microRNAs in mouse granulosa cells using bioinformatics analysis [31]. Qu et al. identified liver detoxification-related microRNAs to investigate the antitoxic effects of MC-LR in fish by next-generation sequencing [32]. Therefore, exploring the functions and expression levels of miRNAs could provide valuable and novel insights into MC-LR toxicology. Meanwhile, this study provides new theoretical support for discovering new molecular markers for detecting liver toxicity of MCs and new drug targets in the treatment of hepatitis and liver cancer.

2.5. Confirmatory Study and Additional Profiling of the Selected miRNAs by qPCR

Some of the differentially expressed miRNAs in the liver were verified using qPCR, and we found that the verification results were consistent with the sequencing results. As depicted in Figure 3, qPCR analysis of 50 μg/kg MC-LR showed that the expression of 3 miRNAs (miR-2187-3p, miR-2779, and miR-2478) was upregulated, while the expression of 2 miRNAs (miR-146 and miR-92) was downregulated (Figure 3A). Data from the 200 μg/kg MC-LR treatment groups showed that the expression levels of miR-16, miR-144-5p, miR-181a-3p, miR-223, miR-451, and miR-499 were upregulated, while the expression levels of miR-203 and miR-98 were downregulated (Figure 3B).

2.6. Expression of Selected miRNAs in the Liver of Silver Carp

2.7. Expression of Selected miRNAs in Different Tissues of Silver Carp after Exposure to MC-LR

The present study reveals the comprehensive miRNA expression profiles of silver carp liver and provides biological knowledge for the investigation of miRNA-dependent pathways in fish following MC-LR exposure. These results suggest that miRNA might play an important negatively regulated role in MC-LR toxicity. Moreover, we speculate that four miRNAs (miR-16, miR-181a-3p, miR-223, miR-451) may also be involved in MC-LR toxicity in multiple organs.

All fish were handled strictly according to the requirements of guide to ethical review of the welfare of laboratory animals of the People’s Republic of China (Draft of Laboratory Animal Welfare and Ethics Committee in China released on February 6, 2018; identification code: GB/T 35892—2018; date of approval: 1 September 2018).

Juvenile silver carp (Hypophthalmichthys molitrix) (mean body length, 16 ± 0.5 cm; mean body weight, 37.5 ± 3 g) used in this study were purchased, cultured, and treated as described previously [67].
Silver carp (in total 6 per condition) were exposed to 0 (control), 50 μg/kg (low concentration), or 200 μg/kg (high concentration) in separate flow-through tanks. Standard MC-LR (C49H74N10O12, ≥95% purity, HPLC) was purchased from Express Technology Co., Ltd., Beijing, China.
For the exposure, all fish received a single intraperitoneal injection of the MC-LR solution (treatment) or the same volume of saline solution alone (control). The fish from two experimental groups and one control group were kept in separate flow-through tanks. When sampling, six healthy individuals were randomly taken from each of the experimental groups after 1, 3, 6, 12, 24, and 48 h of exposure.

After exposure, various fish tissues (liver, spleen, kidney, and intestine) were separately collected from each treatment group. Small RNA was isolated using TRIzol reagent (Cwbiotech, Beijing, China) following the instructions of the manufacturer. The Agilent 2100 bioanalyzer (Agilent, Germany) was used to detect the quality of small RNA. If the quality of small RNA met the requirements, transcriptome analysis could be performed by small RNA sequencing.

The 49-nt sequence obtained by HiSeq sequencing was obtained by filtering to obtain a reliable target sequence, and the quality, length, and common sequence between the samples were counted. The sRNA was mapped to the genome by SOAP or bowtie to analyze the expression and distribution of sRNA in the genome. The sRNA and miRbase databases were aligned by blast or bowtie to identify known miRNAs that can be used for subsequent analysis. The sRNA was subjected to a repeat annotation by the program to screen and remove the sequences associated with the repeat. The sRNA and GenBank databases and the sRNA and Rfam databases were aligned by blast or bowtie to screen and remove sequences associated with rRNA, scRNA, snoRNA, snRNA, tRNA, etc. The sRNAs were aligned to exons and introns to screen and remove sequences associated with exons and introns. By sorting the annotation of the target sequence, information on each component and expression amount contained in the sample could be obtained. In each of the above annotation information, it was possible that there was a case where one sRNA was simultaneously compared with a plurality of different annotation information. To have a unique annotation for each unique sRNA, the sRNA was traversed according to the priority order of rRNA > known miRNA > piRNA > repeat > exon > intron, and sRNA with no annotation information was represented by unann. Based on the identification of miRNAs, a flexible differential analysis strategy for actual sample information could be used to find miRNAs with different expressions between different groups or between different individuals.

Quantitative real-time PCR (qPCR) was performed to profile the expression levels of miRNAs according to the manufacturer’s instructions (Cwbiotech, Beijing, China). The miRNA-specific primers were designed with primer software based on identified miRNA sequences. Relative expression levels of the miRNA were measured in terms of threshold cycle value (Ct) and were normalized to U6 snRNA using the equation 2−ΔΔCt. All primers were synthesized by GENEWIZ, China, and are shown in Table 1.

Targets of the differentially expressed miRNAs were predicted by miRanda and TargetScan software. TargetScan first searches for the perfect complement of the seeds and then calculates the context score based on the type of surrounding sites [69]. MiRanda improved the accuracy of predictions by measuring the complementary fraction of miRNA binding sites [70]. KEGG is a major public database related to pathways that systematically analyzes the metabolic pathways of gene products in cells, as well as the functions and annotations of these gene products. In organisms, different genes cooperate with each other to exert their biological functions. Through pathway significant enrichment analysis, the most important biochemical metabolic pathways and signal transduction pathways that candidate target genes participate in can be determined, which helps to further understand the biological functions of genes. To further understand the biological functions of the identified miRNAs, we annotated miRNAs and their target genes through GO analysis and KEGG pathway analysis.

Y.F. and X.C. carried out the experiments. B.Z. analyzed the data. J.M. and X.L. conceived and designed the experiments and wrote the article. All authors have read and agreed to the published version of the manuscript. 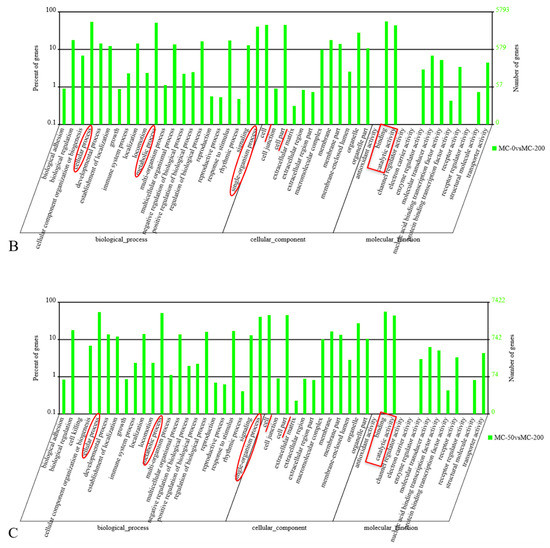 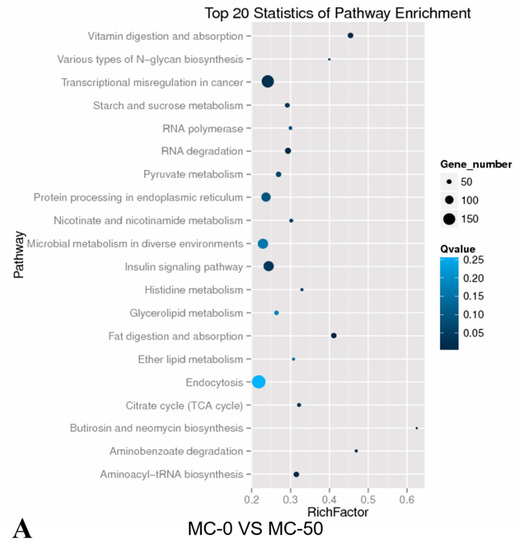 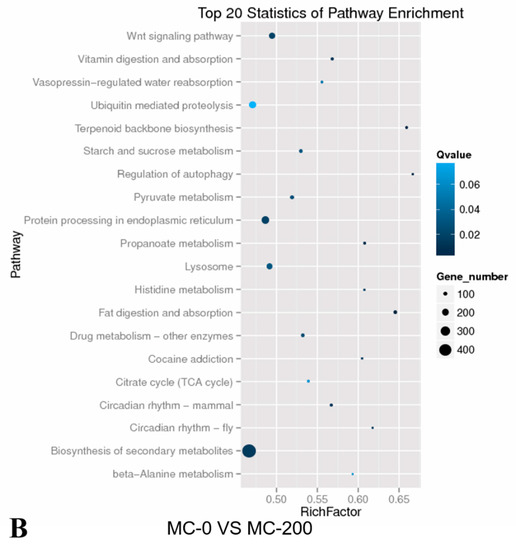 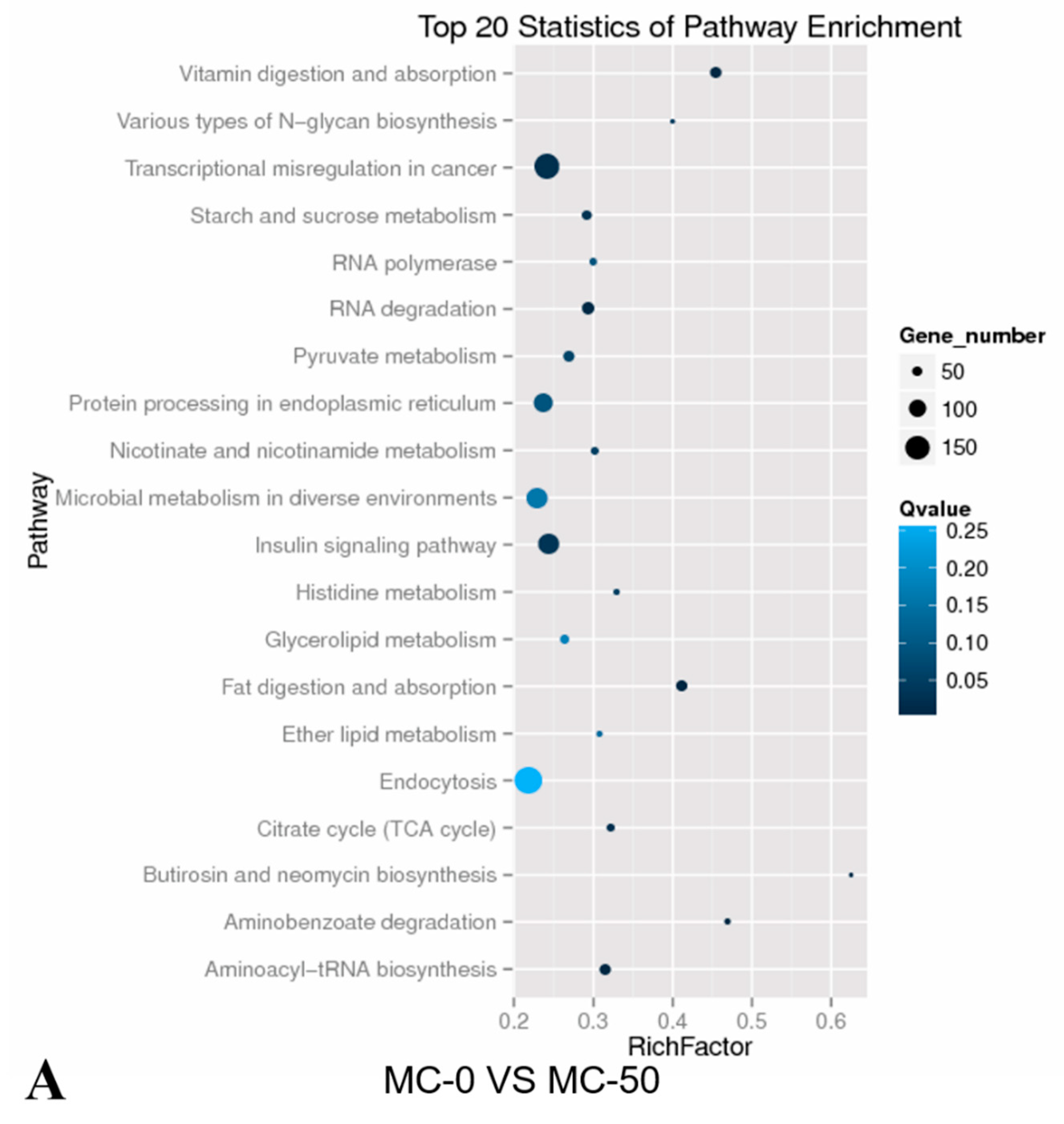 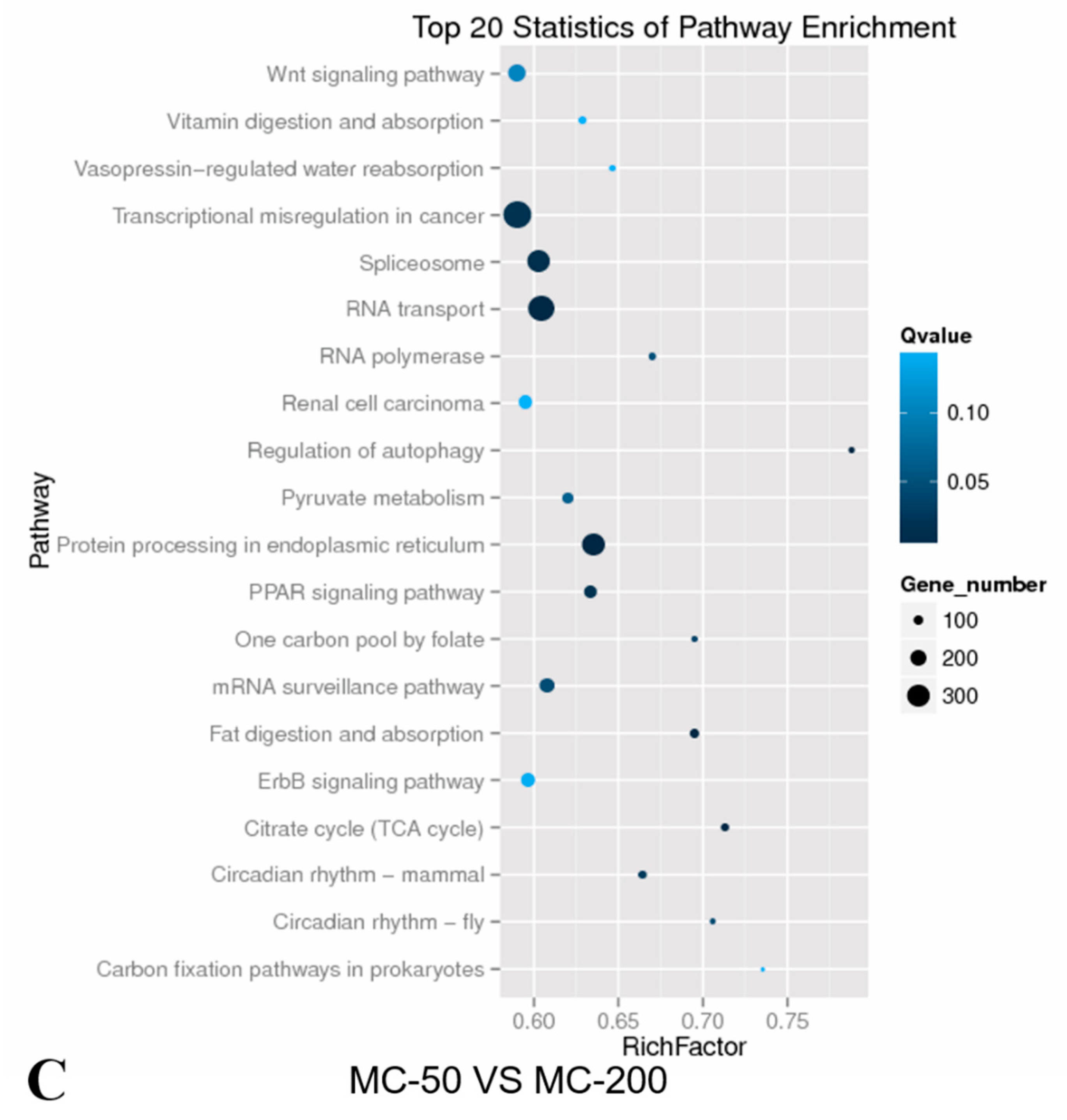 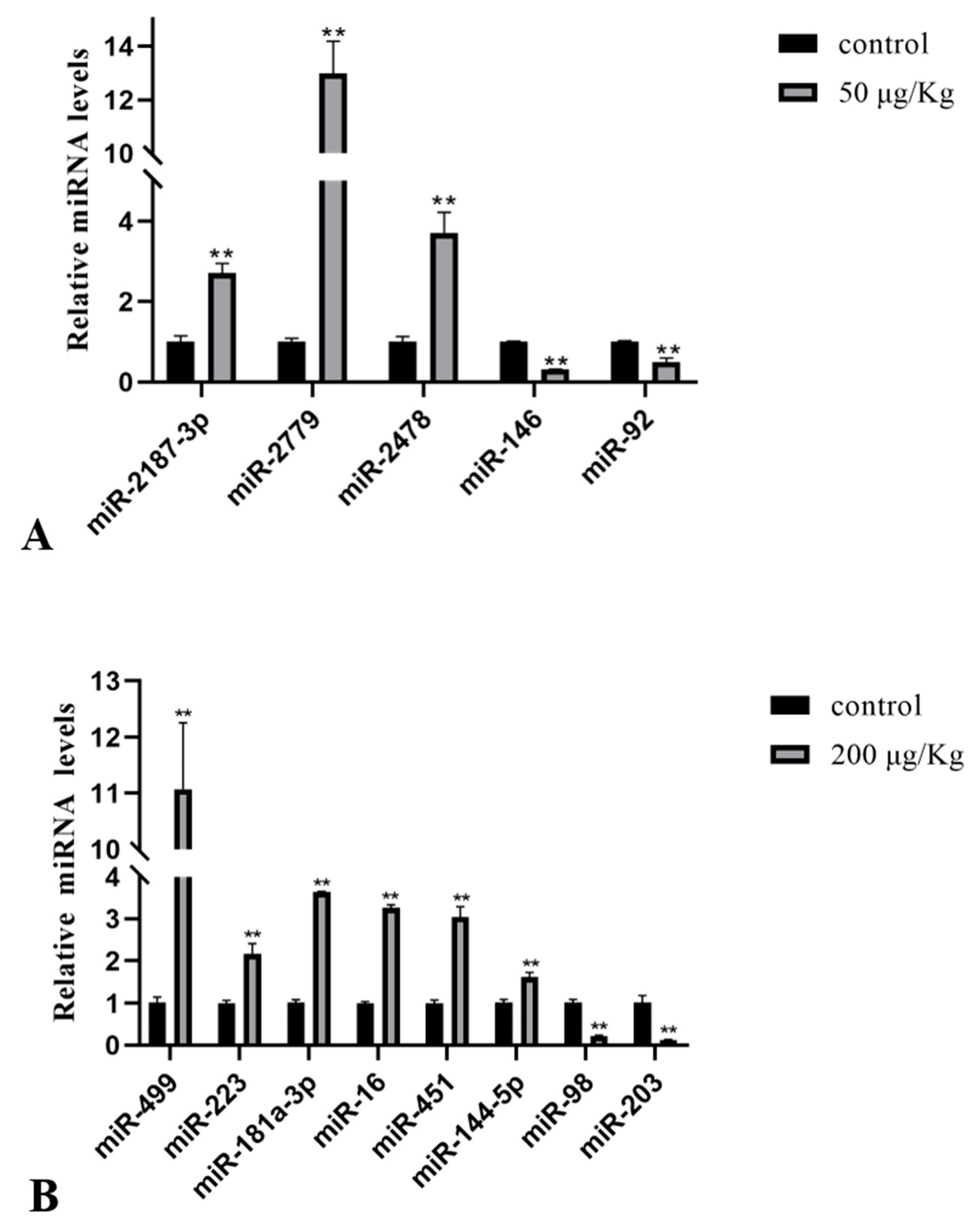 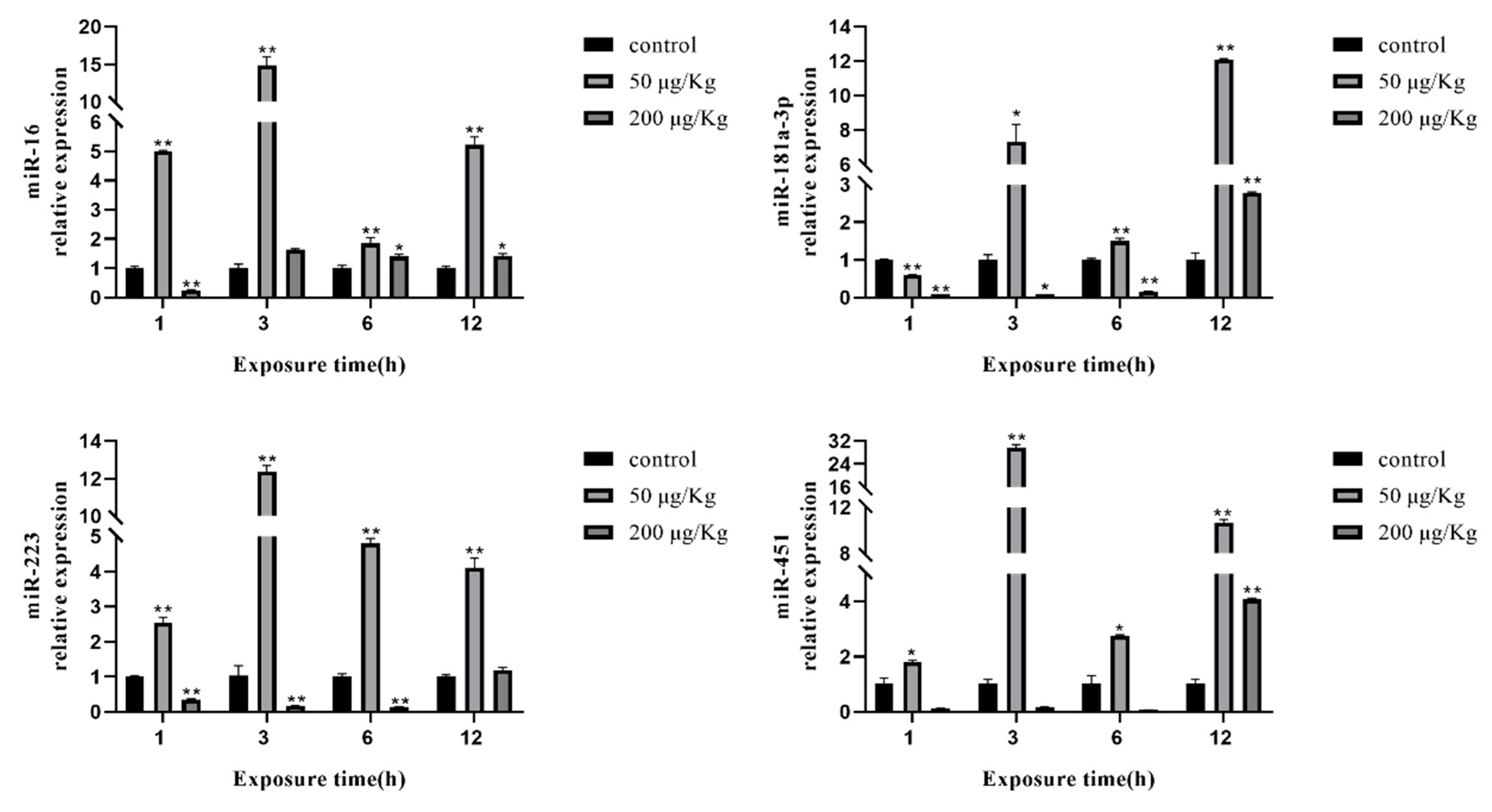 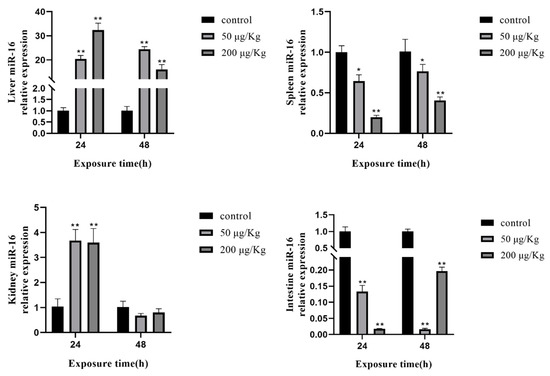 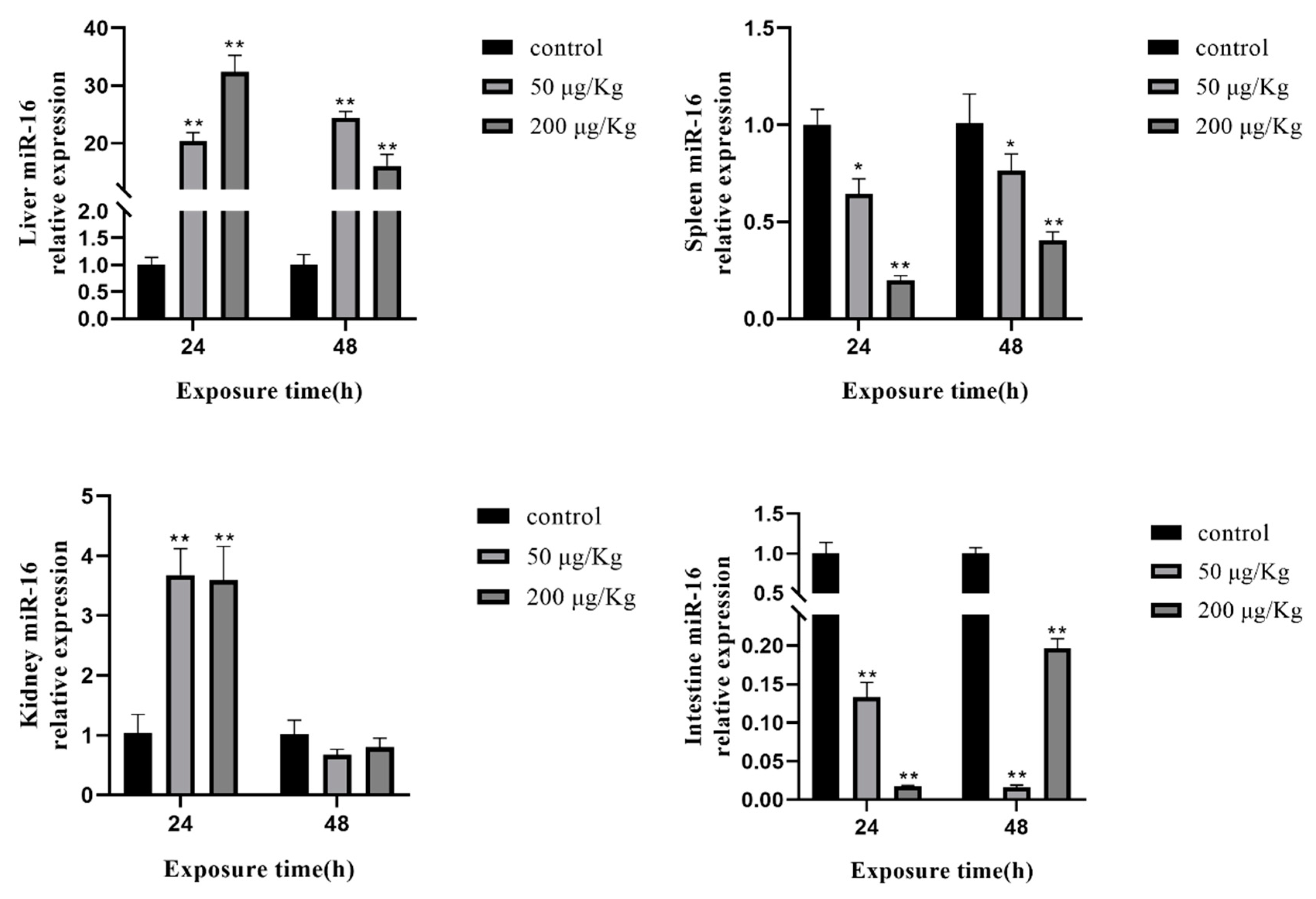 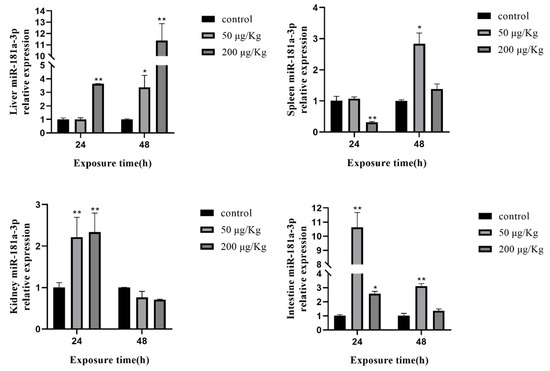 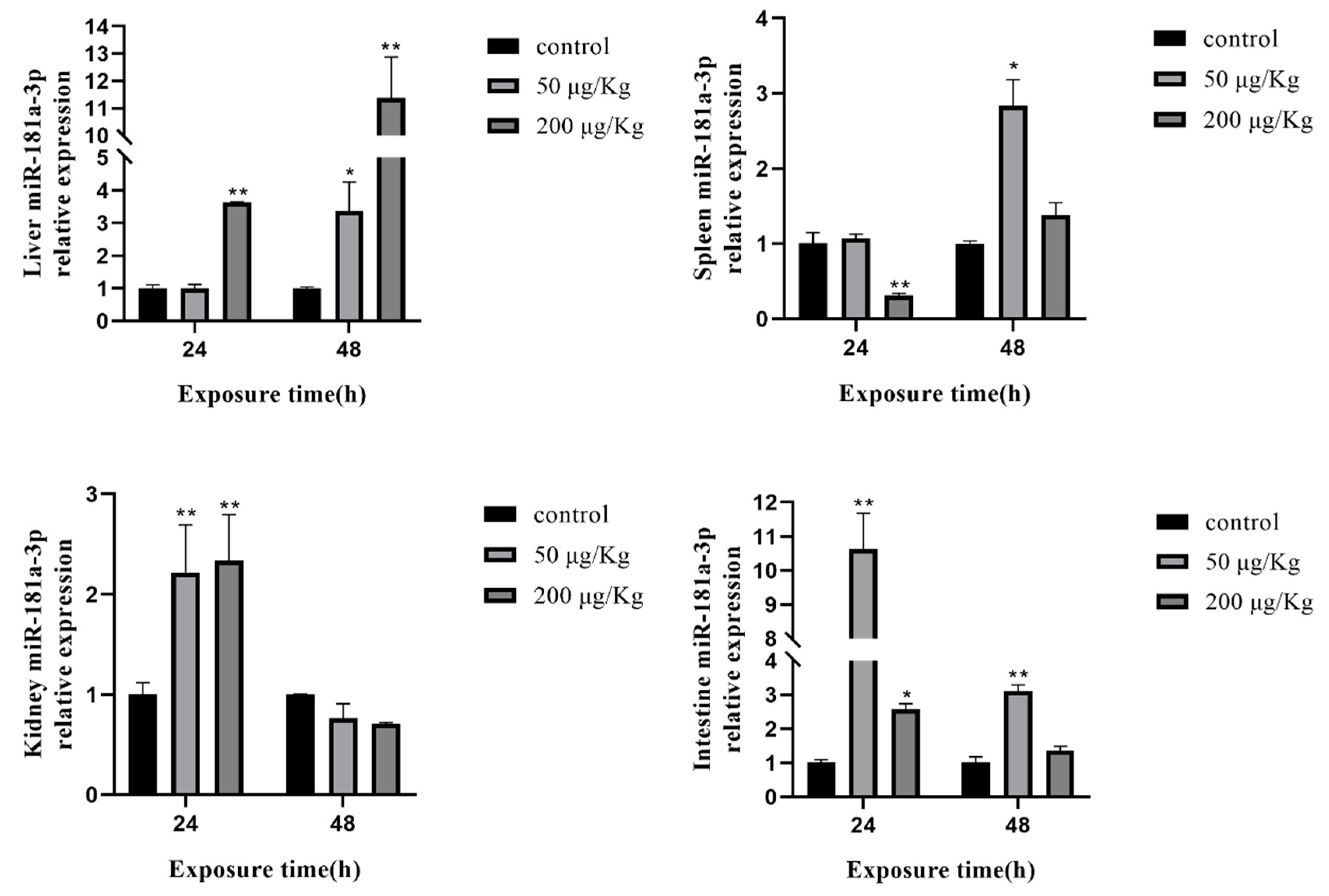 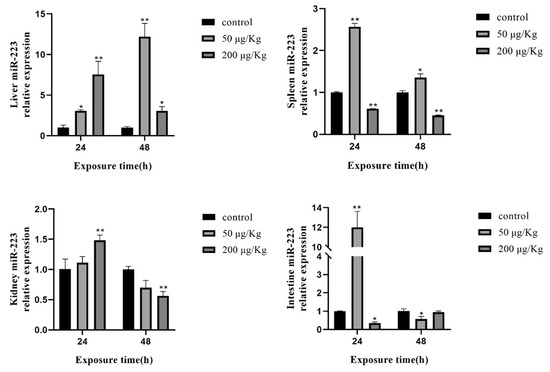 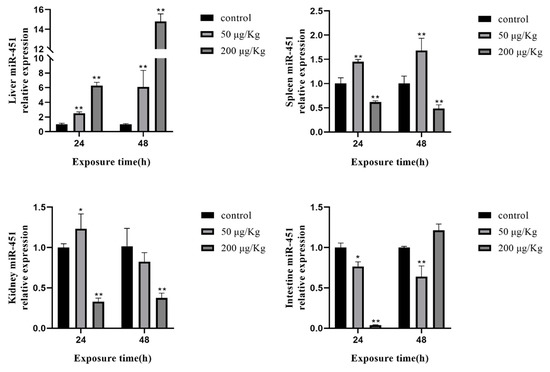 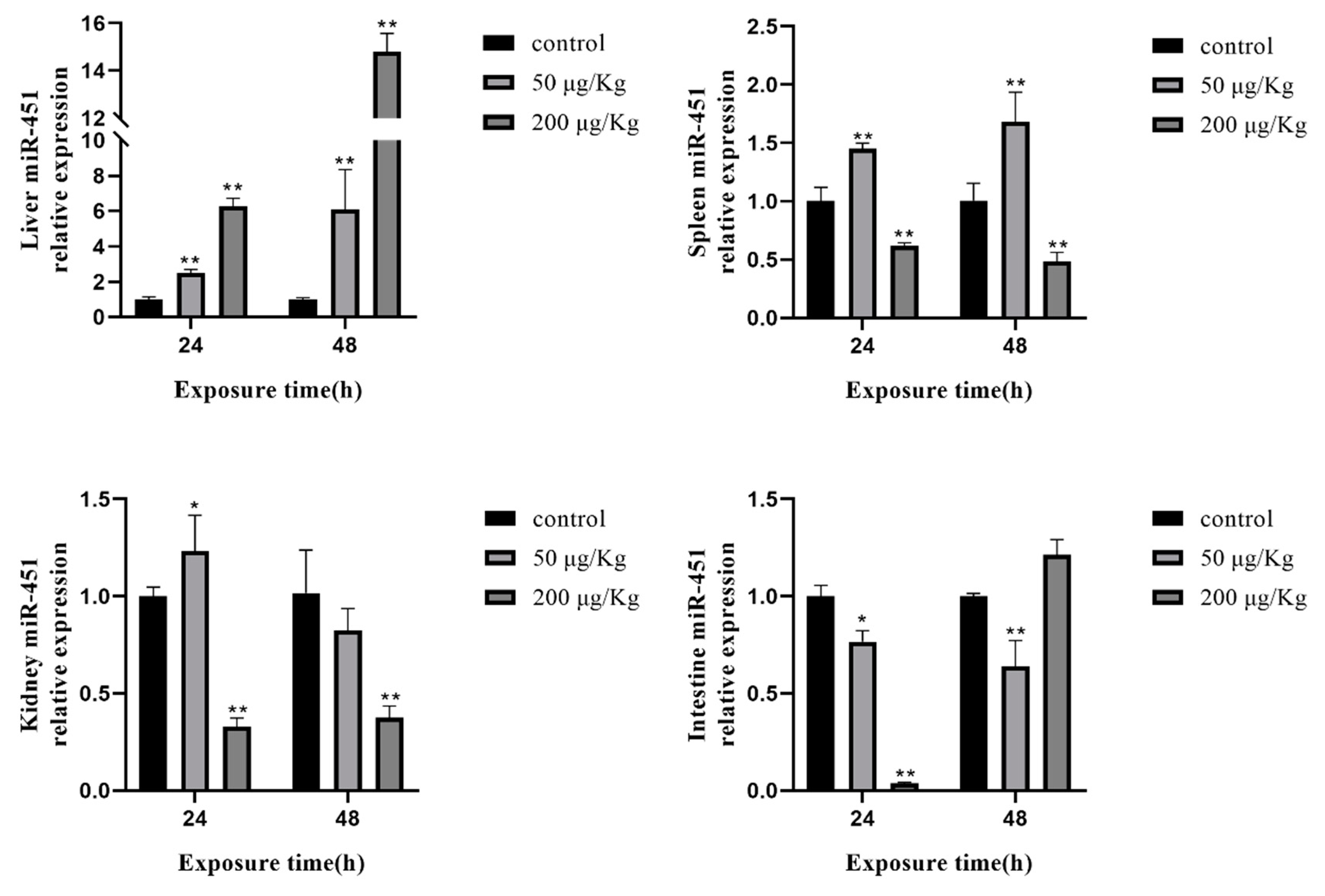 Table 1. Sequences of miRNA primers.
Table 1. Sequences of miRNA primers.
© 2020 by the authors. Licensee MDPI, Basel, Switzerland. This article is an open access article distributed under the terms and conditions of the Creative Commons Attribution (CC BY) license (http://creativecommons.org/licenses/by/4.0/).
We use cookies on our website to ensure you get the best experience. Read more about our cookies here.
Accept
We have just recently launched a new version of our website. Help us to further improve by taking part in this short 5 minute survey here. here.
Never show this again