A toxin is a poisonous substance produced within living cells or organisms. One of the most potent groups of toxins currently known are the Botulinum Neurotoxins (BoNTs). These are so deadly that as little as 62 ng could kill an average human; to put this into context that is approximately 200,000 × less than the weight of a grain of sand. The extreme toxicity of BoNTs leads to the need for methods of determining their concentration at very low levels of sensitivity. Currently the mouse bioassay is the most widely used detection method monitoring the activity of the toxin; however, this assay is not only lengthy, it also has both cost and ethical issues due to the use of live animals. This review focuses on detection methods both existing and emerging that remove the need for the use of animals and will look at three areas; speed of detection, sensitivity of detection and finally cost. The assays will have wide reaching interest, ranging from the pharmaceutical/clinical industry for production quality management or as a point of care sensor in suspected cases of botulism, the food industry as a quality control measure, to the military, detecting BoNT that has been potentially used as a bio warfare agent. View Full-Text
Keywords: Botulinum Neurotoxin; Botulism; Rapid Detection; Sensitivity; PoC Botulinum Neurotoxin; Botulism; Rapid Detection; Sensitivity; PoC
►▼ Show Figures 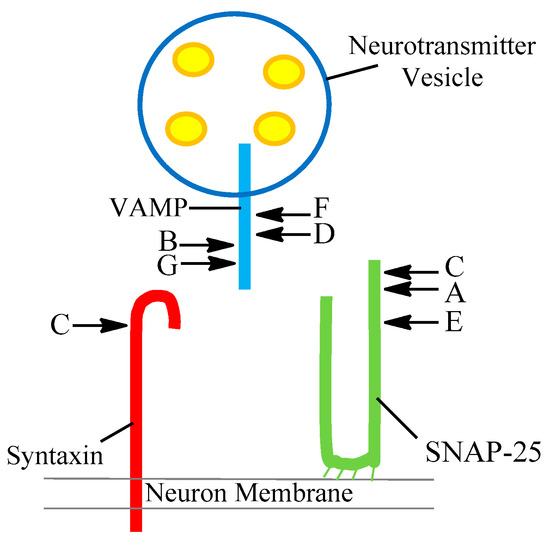