Correction: Mitema, A. et al. The Development of a qPCR Assay to Measure Aspergillus flavus Biomass in Maize and the Use of a Biocontrol Strategy to Limit Aflatoxin Production. Toxins 2019, 11, 179

by Christian I. Oporto 1,2, Carlos A. Villarroel 2

Patulin (4-hydroxy-4H-furo[3,2c]pyran-2[6H]-one) is a mycotoxin produced by a suite of fungi species. Patulin is toxic to humans and is a sporadic contaminant in products that were made from fungi-infected fruits. The baker yeast Saccharomyces cerevisiae (S. cerevisiae) has been shown to decrease patulin levels likely by converting it to the less harmful E-ascladiol, yet this capacity is dependent on the strain utilized. In this study we show that four representative strains of different S. cerevisiae lineages differ in their ability to tolerate and decrease patulin levels in solution, demonstrating that some strains are better suitable for patulin biocontrol. Indeed, we tested the biocontrol capacities of the best patulin-reducer strain (WE) in contaminated apple juice and demonstrated their potential role as an efficient natural biocontrol solution. To investigate the mechanisms behind the differences between strains, we explored transcriptomic changes of the top (WE strain) and worst (WA strain) patulin-biocontroller strains after being exposed to this toxin. Large and significant gene expression differences were found between these two strains, the majority of which represented genes associated with protein biosynthesis, cell wall composition and redox homeostasis. Interestingly, the WE isolate exhibited an overrepresentation of up-regulated genes involved in membrane components, suggesting an active role of the membrane towards patulin detoxification. In contrast, WA upregulated genes were associated with RNA metabolism and ribosome biogenesis, suggesting a patulin impact upon transcription and translation activity. These results suggest that different genotypes of S. cerevisiae encounter different stresses from patulin toxicity and that different rates of detoxification of this toxin might be related with the plasma membrane composition. Altogether, our data demonstrates the different molecular mechanisms in S. cerevisiae strains withstanding patulin exposure and opens new avenues for the selection of new patulin biocontroller strains. View Full-Text
Keywords: Saccharomyces cerevisiae; mycotoxins; biocontrol; yeast; transcriptome Saccharomyces cerevisiae; mycotoxins; biocontrol; yeast; transcriptome
►▼ Show Figures 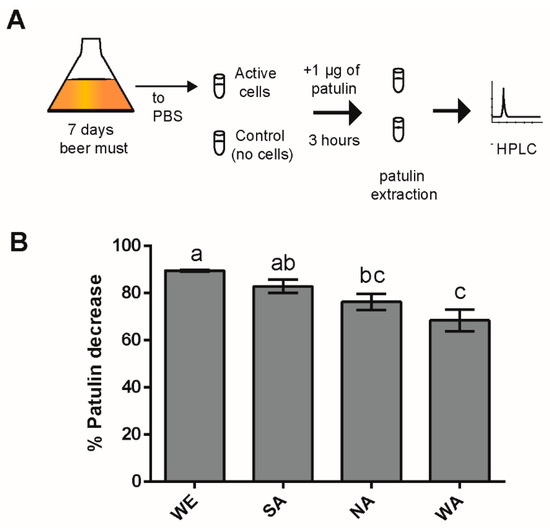