Hydrophobized Reversed-Phase Adsorbent for Protection of Dairy Cattle against Lipophilic Toxins from Diet. Efficiensy In Vitro and In Vivo
Next Article in Special Issue

:
The functional activities of Anguimorpha lizard venoms have received less attention compared to serpent lineages. Bite victims of varanid lizards often report persistent bleeding exceeding that expected for the mechanical damage of the bite. Research to date has identified the blockage of platelet aggregation as one bleeding-inducing activity, and destructive cleavage of fibrinogen as another. However, the ability of the venoms to prevent clot formation has not been directly investigated. Using a thromboelastograph (TEG5000), clot strength was measured after incubating human fibrinogen with Heloderma and Varanus lizard venoms. Clot strengths were found to be highly variable, with the most potent effects produced by incubation with Varanus venoms from the Odatria and Euprepriosaurus clades. The most fibrinogenolytically active venoms belonged to arboreal species and therefore prey escape potential is likely a strong evolutionary selection pressure. The results are also consistent with reports of profusive bleeding from bites from other notably fibrinogenolytic species, such as V. giganteus. Our results provide evidence in favour of the predatory role of venom in varanid lizards, thus shedding light on the evolution of venom in reptiles and revealing potential new sources of bioactive molecules useful as lead compounds in drug design and development.
Keywords:
Anguimorpha; Varanus; Heloderma; lizard venom; fibrinogenolytic; anticoagulation
Key Contribution: Lizard venom has been an area of great controversy due to less functional data available relative to snake venom research. In physiologically relevant in vitro studies, varanid lizard venoms were shown to be anticoagulant via destructive cleavage of fibrinogen.

Testing revealed no difference in clot strengths when incubating the venoms in the presence or absence of calcium. However, relative presence or absence of the co-factor phospholipid was shown to exert an effect upon the relative toxicity of the venoms. The thrombin control for both treatments produced similarly strong clots with or without phospholipid (without PPL: 11.2 +/− 0.3; with PPL: 11.4 +/− 0.3) (Figure 1 and Figure 2). The three species of Heloderma, L. borneensis and P. apodus all produced clots within or close to control clot strengths and these venoms displayed no evidence of PPL dependence (Figure 1, Figure 2 and Figure 3). Similarly, saliva samples from the non-anguimorph, non-venomous lizard species (T. scincoides and T. teguixin) produced clots within control strengths as expected (Figure 1, Figure 2 and Figure 3).
In contrast to the undetectable activity of the Heloderma and Lanthanotus venoms at the concentrations tested in this assay, the fibrinogenolytic activities of varanid lizards were highly variable, including some demonstrating extremely potent activities with differential co-factor dependence (Figure 1 and Figure 2). Most species expressed minimal differences between co-factor dependence, with the exception of V. beccarii and V. scalaris, both of which were significantly more potent in the absence of PPL (V. beccarii P = 0.0017, V. scalaris P = 0.0014) (Figure 1 and Figure 2). The most potent species in the absence of PPL (V. beccarii (2 +/− 0.7 mm), V. mitchelli (2.9 +/− 0.3 mm), V. prasinus (2.4 +/− 0.3 mm) and V. scalaris (2 +/− 0.2 mm)) had stronger fibrinogenolytic activity than the positive control P. flavoviridis (6.6 +/− 1.1 mm), a pit viper from Okinawa, Japan with known fibrinogenolytic activity [57] (Figure 1). Other species within the activity range of P. flavoviridis or stronger include: V. baritji (7.6 +/− 0.9 mm), V. giganteus (3.9 +/− 0.3 mm), V. jobiensis (3.4 +/− 1.8 mm), V. kingorum (8 +/− 0.6 mm), V. melinus (6 +/− 0.9 mm), V. semiremex (4.4 +/− 0.9 mm), V. spenceri (5.5 +/− 0.3 mm) and V. tristis (5.5 +/− 0.7 mm) (Figure 1 and Figure 2). Clear phylogenetic patterns were evident, with destructive, non-clotting cleavage of fibrinogen amplified on at least three separate occasions: the V. beccari, V. jobiensis, V. melinus, and V. prasinus last common ancestor, with the lessened activity of V. melinus representing a secondary reduction; the V. giganteus and V. spenseri last common ancestor; and the V. mitchelii, V. scalaris, V. semiremix and V. tristis last common ancestor (Figure 3).

The phylogenetic tree (adapted from [60,61]) was produced using Mesquite software (version 3.2) [74] and then imported to Rstudio using the APE package [75]. Ancestral states were estimated for all traits using maximum likelihood as implemented in the contMap function of the R package phytools [76]. Statistical significance between treatment types was determined by Student’s t-test.

We thank Lucas Cheyne, Joe Ball and Ian Jenkins for the provision of study samples. 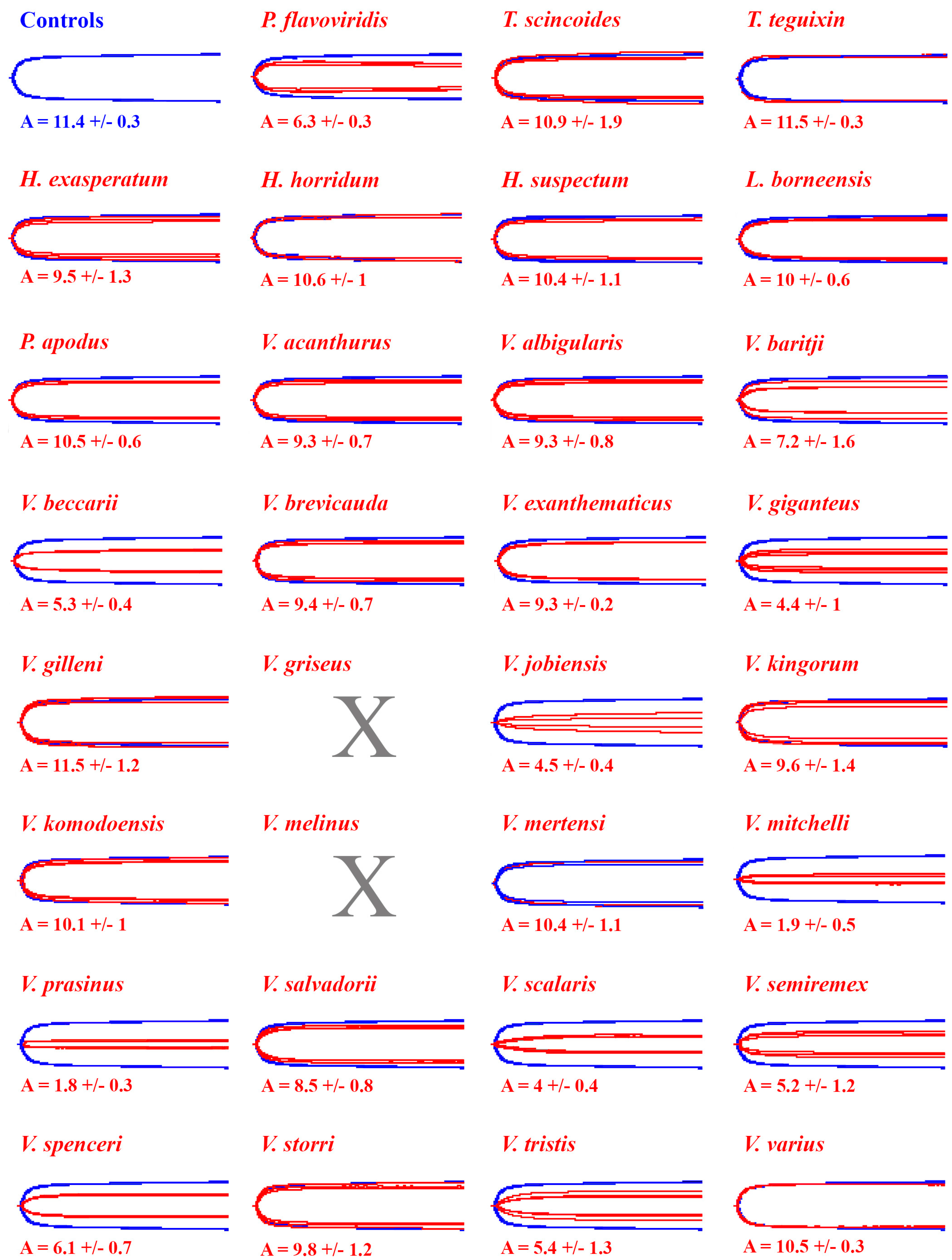