Hydrophobized Reversed-Phase Adsorbent for Protection of Dairy Cattle against Lipophilic Toxins from Diet. Efficiensy In Vitro and In Vivo
Next Article in Special Issue

The functional activities of Anguimorpha lizard venoms have received less attention compared to serpent lineages. Bite victims of varanid lizards often report persistent bleeding exceeding that expected for the mechanical damage of the bite. Research to date has identified the blockage of platelet aggregation as one bleeding-inducing activity, and destructive cleavage of fibrinogen as another. However, the ability of the venoms to prevent clot formation has not been directly investigated. Using a thromboelastograph (TEG5000), clot strength was measured after incubating human fibrinogen with Heloderma and Varanus lizard venoms. Clot strengths were found to be highly variable, with the most potent effects produced by incubation with Varanus venoms from the Odatria and Euprepriosaurus clades. The most fibrinogenolytically active venoms belonged to arboreal species and therefore prey escape potential is likely a strong evolutionary selection pressure. The results are also consistent with reports of profusive bleeding from bites from other notably fibrinogenolytic species, such as V. giganteus. Our results provide evidence in favour of the predatory role of venom in varanid lizards, thus shedding light on the evolution of venom in reptiles and revealing potential new sources of bioactive molecules useful as lead compounds in drug design and development. View Full-Text
Keywords: Anguimorpha; Varanus; Heloderma; lizard venom; fibrinogenolytic; anticoagulation Anguimorpha; Varanus; Heloderma; lizard venom; fibrinogenolytic; anticoagulation
►▼ Show Figures 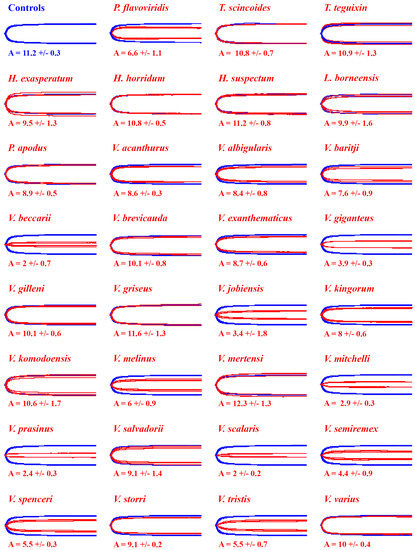