The Beneficial and Debilitating Effects of Environmental and Microbial Toxins, Drugs, Organic Solvents and Heavy Metals on the Onset and Progression of Multiple Sclerosis
Previous Article in Journal

The occurrence of Harmful Algal Blooms (HABs) and bacteria can be one of the great threats to public health due to their ability to produce marine toxins (MTs). The most reported MTs include paralytic shellfish toxins (PSTs), amnesic shellfish toxins (ASTs), diarrheic shellfish toxins (DSTs), cyclic imines (CIs), ciguatoxins (CTXs), azaspiracids (AZTs), palytoxin (PlTXs), tetrodotoxins (TTXs) and their analogs, some of them leading to fatal outcomes. MTs have been reported in several marine organisms causing human poisoning incidents since these organisms constitute the food basis of coastal human populations. In African countries of the Indian Ocean and the Red Sea, to date, only South Africa has a specific monitoring program for MTs and some other countries count only with respect to centers of seafood poisoning control. Therefore, the aim of this review is to evaluate the occurrence of MTs and associated poisoning episodes as a contribution to public health and monitoring programs as an MT risk assessment tool for this geographic region. View Full-Text
Keywords: Indian Ocean; marine toxins; harmful algal bloom Indian Ocean; marine toxins; harmful algal bloom
►▼ Show Figures 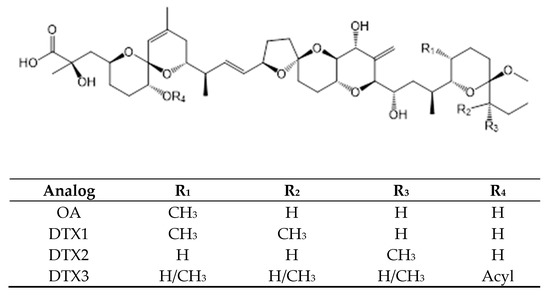