The Presence of Toxic and Non-Toxic Cyanobacteria in the Sediments of the Limpopo River Basin: Implications for Human Health

The presence of harmful algal blooms (HABs) and cyanotoxins in drinking water sources poses a great threat to human health. The current study employed molecular techniques to determine the occurrence of non-toxic and toxic cyanobacteria species in the Limpopo River basin based on the phylogenetic analysis of the 16S rRNA gene. Bottom sediment samples were collected from selected rivers: Limpopo, Crocodile, Mokolo, Mogalakwena, Nzhelele, Lephalale, Sand Rivers (South Africa); Notwane (Botswana); and Shashe River and Mzingwane River (Zimbabwe). A physical-chemical analysis of the bottom sediments showed the availability of nutrients, nitrates and phosphates, in excess of 0.5 mg/L, in most of the river sediments, while alkalinity, pH and salinity were in excess of 500 mg/L. The FlowCam showed the dominant cyanobacteria species that were identified from the sediment samples, and these were the Microcystis species, followed by Raphidiopsis raciborskii, Phormidium and Planktothrix species. The latter species were also confirmed by molecular techniques. Nevertheless, two samples showed an amplification of the cylindrospermopsin polyketide synthetase gene (S3 and S9), while the other two samples showed an amplification for the microcystin/nodularin synthetase genes (S8 and S13). Thus, these findings may imply the presence of toxic cyanobacteria species in the studied river sediments. The presence of cyanobacteria may be hazardous to humans because rural communities and farmers abstract water from the Limpopo river catchment for human consumption, livestock and wildlife watering and irrigation. View Full-Text
Keywords: cyanobacteria; cyanotoxins; nutrient enrichment; akinetes; harmful algal blooms; PCR; phylogenetic analyses cyanobacteria; cyanotoxins; nutrient enrichment; akinetes; harmful algal blooms; PCR; phylogenetic analyses
►▼ Show Figures 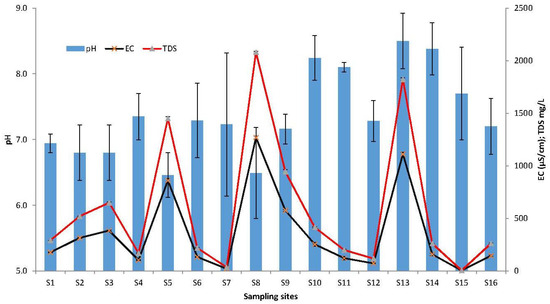