The BoNT/FA gene sequence was codon optimized for expression in E. coli and used to construct three expression plasmids encoding: (1) rBoNT/FA(0)-his, which is recombinant BoNT/FA rendered endopeptidase inactive by two point mutations in the catalytic site (E227Q and H230Y) and carrying a C-terminal ten-histidine affinity tag (prefix r indicates recombinant, (0) indicates enzymatically inactive, suffix-his indicates ten-histidine affinity tag); (2) mrBoNT/FA(0)-his, which is endopeptidase inactive recombinant BoNT/FA in which the naturally occurring activation loop (amino acids S429 to L437 in UniParc sequence UPI00052C1529) is replaced by the activation loop from BoNT/F1 (K430 to L444 in UniParc sequence UPI00000B66D1) (prefix mr indicates modified recombinant); (3) mrBoNT/FA-his, which is endopeptidase active recombinant BoNT/FA containing the BoNT/F1 activation loop (Figure 1A and Supplemental Figures S1 and S2).
rBoNT/FA(0)-his, purified from E. coli by Ni2+ affinity chromatography, yielded between 3–10 mg/L of the single chain form. However, we were unable to identify suitable activation conditions to generate the mature heterodimeric form of this protein. A limited screen of proteolytic activation conditions by each of two different proteases did not identify suitable conditions for specific cleavage of the activation loop. The proteases were Endoproteinase Lys-C (Lys-C) and trypsin, tested between 3.2–0.001 μg/mL, for cleavage of 4 μM rBoNT/FA(0)-his, 1 h reaction time at 37 °C. Both proteases, in our hands, cleaved additional sites outside of the activation loop and created unwanted truncated species visible by SDS-PAGE (Figure 1).
Sequence alignment of the activation loop from BoNT/FA with those from other F serotype family members showed variability across this region (Figure 1B). The activation loop of BoNT/FA is six amino acids shorter compared to other family members and we speculated that the short loop of BoNT/FA might be less accessible to proteases. We had previously identified conditions under which the activation loop of rBoNT/F1 is cleaved selectively by Lys-C (data not shown) and hypothesized that this activation loop might retain sensitivity to selective activation within the context of the BoNT/FA protein. mrBoNT/FA(0)-his is a modified BoNT/FA containing the activation loop from BoNT/F1 (K430-L444). This protein was expressed and purified with similar yields to rBoNT/FA(0)-his. Lys-C did indeed cleave more selectively within the longer activation loop. Unwanted truncated species were generated to a lesser extent and we were able to purify activated heterodimeric mrBoNT/FA(0)-his by a subsequent step of mixed-mode chromatography (Figure 1D and Methods Section). Three independent batches of the endopeptidase active form, mrBoNT/FA-his, purified by the same method under biosafety level 2 plus containment, yielded between 0.1–0.7 mg/L E. coli culture.
The calculated molecular weights, based on the primary sequence, of the BoNT/FA LC and HC subunits are 48.8 kDa and 100.7 kDa, respectively. The purified recombinant proteins migrated with lower than expected apparent molecular weights on SDS-PAGE (Figure 2 and Figure 3). However, a combination of N-terminal sequencing, Western blot data, and the effects of reducing agents suggest that both subunits have intact N- and C-termini and are linked by an interchain disulphide bond. N-terminal sequencing is consistent with the expected N-terminal residues for the LC and HC subunits (Figure 2B). Western blotting for the C-terminal histidine tag detected immunoreactive species consistent with the HC subunit having an intact C-terminus (Figure 2C). Under nonreducing conditions, mrBoNT/FA(0)-his migrated as a single species on SDS-PAGE (apparent molecular weight approximately 150 kDa). Under reducing conditions, it migrated as two species (approximately 50 and 100 kDa) (Figure 2). This pattern is consistent with the presence of an intact disulphide bridge between C-terminal LC and N-terminal HC cysteine residues [41]. The HC subunit was also immunoreactive to a polyclonal anti-BoNT/A (Metabiologics, Madison, WI, USA) on Western blots (Figure 2E). This is consistent with the high sequence homology with the HC of BoNT/A1. In contrast, a polyclonal anti-BoNT/F1 (Abcam, Cambridge, UK, Ab27168) did not detect BoNT/FA (Figure 2D). LC/FA is 50% identical with BoNT/F1, against which this antiserum was raised; one possibility is that the LC/FA may not contain the LC/F1 epitopes to which this antiserum binds.

mrBoNT/FA-his and nBoNT/F1 (Metabiologics) were diluted to 0.2 mg/mL and titrated (10-fold serial dilutions) in assay buffer (50 mM HEPES, pH 7.2, 20 μM ZnCl2, 1 μg/μL BSA, 10 mM DTT). The soluble region of human VAMP-2 (amino acids 2–94) was expressed in E. coli with a cleavable N-terminal GST and a C-terminal GFP tag. The protein was purified on glutathione sepharose resin (GE Healthcare Life Sciences), the GST tag cleaved (PreScission protease), then both the cleaved GST-tag and the PreScission protease (itself GST-tagged) were cleared by a second pass over glutathione sepharose resin. Each diluted BoNT was mixed with an equal volume of 8 μM recombinant VAMP-2(2–94)-GFP solution in assay buffer and incubated at 37 °C for 1 h. Reactions were terminated by addition of Novex 2× LDS sample buffer (ThermoFisher Scientific) and heating at 95 °C for 5 min. Samples were loaded onto 4–12% Bis–Tris gels (Thermo Fisher Scientific) alongside BenchMark molecular weight markers (Thermo Fisher Scientific), and visualized by staining with Simply Blue Safestain (Thermo Fisher Scientific). Assay results were quantified by densitometry (Syngene Bioimaging) and the proportion of cleaved VAMP-2(2–94)-GFP (% cleaved) was plotted against the BoNT concentration. VAMP-2 cleaved products (approximately 31–32 kDa) were excised from the SDS-PAGE gel and analyzed by Edman degradation (Alta Bioscience, Edgbaston, UK) to determine the site of cleavage. The effect of point mutations E227Q/H230Y in mrBoNT/FA(0)-his was evaluated by incubating 2 μM mrBoNT/FA(0)-his with 4 μM VAMP-2(2–94)-GFP at 37 °C for 1 h then stopping and analyzing the reaction as above.

Rat cortical neurons were prepared from embryonic Day 17 to 18 (E17–E18) Sprague Dawley rat embryos. Dissected cortical tissue was collected into ice-cold Hank’s Balanced Salt Solution (HBSS), without Ca2+ or Mg2+, and then dissociated in papain solution for 40 min at 37 °C following the manufacturer’s instructions (Worthington Biochemical, Lakewood, NJ, USA). Cortical cells were plated on poly-l-ornithine (PLO) coated 96-well plates at a density of 20,000 cells/well in 125 μL Neurobasal media containing 2% B27 supplement, 0.5 mM GlutaMAX, 1% fetal bovine serum (FBS) and 100 U/mL penicillin/streptomycin. Cells were maintained at 37 °C in a humidified atmosphere containing 5% CO2. A further 125 μL Neurobasal media containing 2% B27, 0.5 mM GlutaMAX was added on the 4th day in vitro (DIV 4). Cells were maintained by replacement of half media twice per week. On DIV 11, 1.5 μM cytosine β-d-arabinofuranoside (AraC) was added to the media to prevent proliferation of non-neuronal cells.

Rat embryonic spinal cord neurons were prepared from E15 Sprague-Dawley rat embryos as described previously [63]. Briefly, dissected spinal cords were dissociated in trypsin-EDTA for 45 min at 37 °C, then triturated to a single cell suspension in plating media (minimal essential medium, (MEM) containing 2 mM GlutaMAX, 5% horse serum, 0.6% d-glucose and 0.15% NaHCO3). Cells were plated in matrigel coated 96-well plates at a density of 125,000 cells/well in 125 μL plating media. Cells were maintained at 37 °C in a humidified atmosphere containing 10% CO2. 24 h after plating, media was replaced with 125 μL MEM containing 2 mM GlutaMAX, 5% horse serum, 0.6% d-glucose, 0.15% NaHCO3, 2% N2 supplement, 40 ng/mL corticosterone, 20 ng/mL triiodothyronine. On DIV 6, 60 μM 5-fluoro-2′-deoxyuridine (FdU) and 14 μM uridine (U) were added to the media to prevent proliferation of non-neuronal cells. The media in each well was doubled to 250 μL on DIV 8. Cells were then maintained by replacement of half media twice per week.

After assessment of glutamate release, rat cortical neurons were lysed in 40 μL of lysis buffer (NuPage LDS sample buffer, 1 mM DTT and 1:500 Benzonase) for 10 min at room temperature. Samples were boiled at 90 °C for 5 min and 15 μL lysates loaded per lane to 12% Bis-Tris gels and run in either 3-(N-morpholino)propanesulfonic acid (MOPS) buffer at 200 V for 80 min (SNAP-25) or 2-(N-morpholino)ethanesulfonic acid (MES) buffer at 200 V for 50 min (VAMP-2). Proteins were transferred to nitrocellulose membranes via a Transblot Turbo (Biorad) using the mixed MW (SNAP-25) or low MW (VAMP-2) programs. Membranes were blocked for 1 h at room temperature with 5% low fat milk/PBS-Tween and then incubated with either anti-SNAP-25 (Sigma-Aldrich S9684 1:4000) or anti-VAMP-2 (Eurogentec custom made 1:500) primary antibody overnight at 4 °C. Membranes were washed 3 times in PBS-Tween and incubated with anti-rabbit-HRP secondary antibody for 1 h at room temperature. Membranes were washed for 3 × 5 min in PBS-Tween, then developed with SuperSignal West Dura or West Femto chemiluminescent substrate and visualized using a Syngene PXi system. Band densitometry was analysed using Genetools software and % protein cleavage was determined using the ratio of the full-length protein to the cleaved product for both SNAP-25 and VAMP-2.

This work was sponsored by Ipsen.

This work was sponsored by Ipsen, all authors are current or former employees of Ipsen. The authors declare no conflicts of interest. 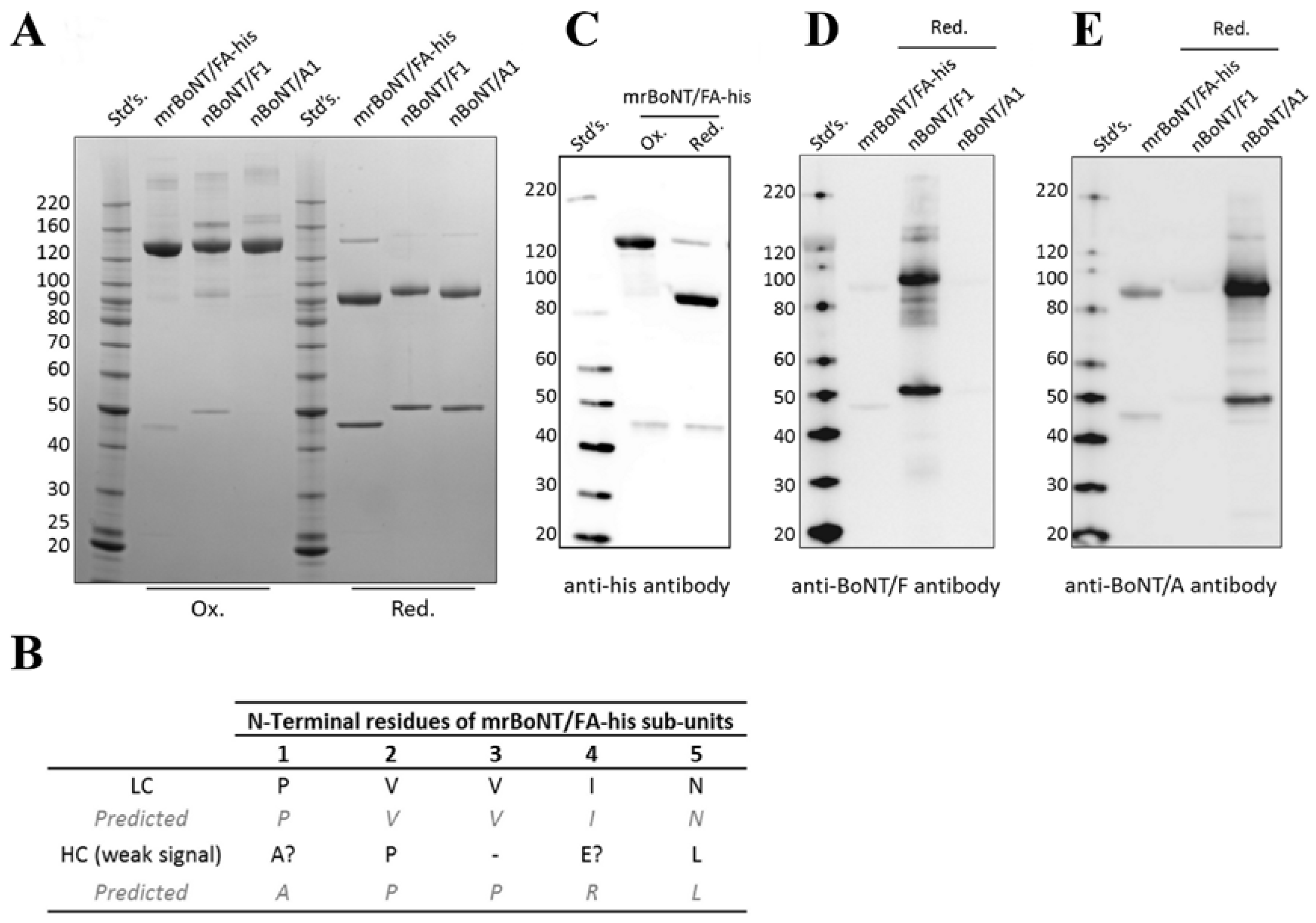 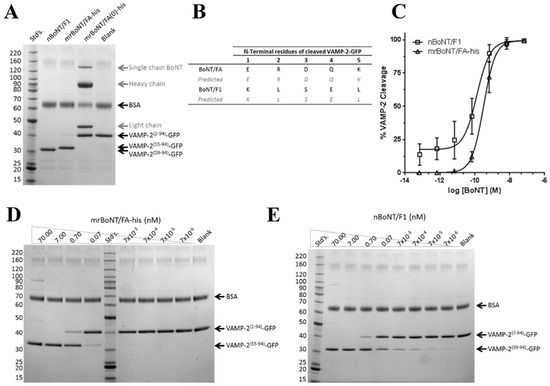 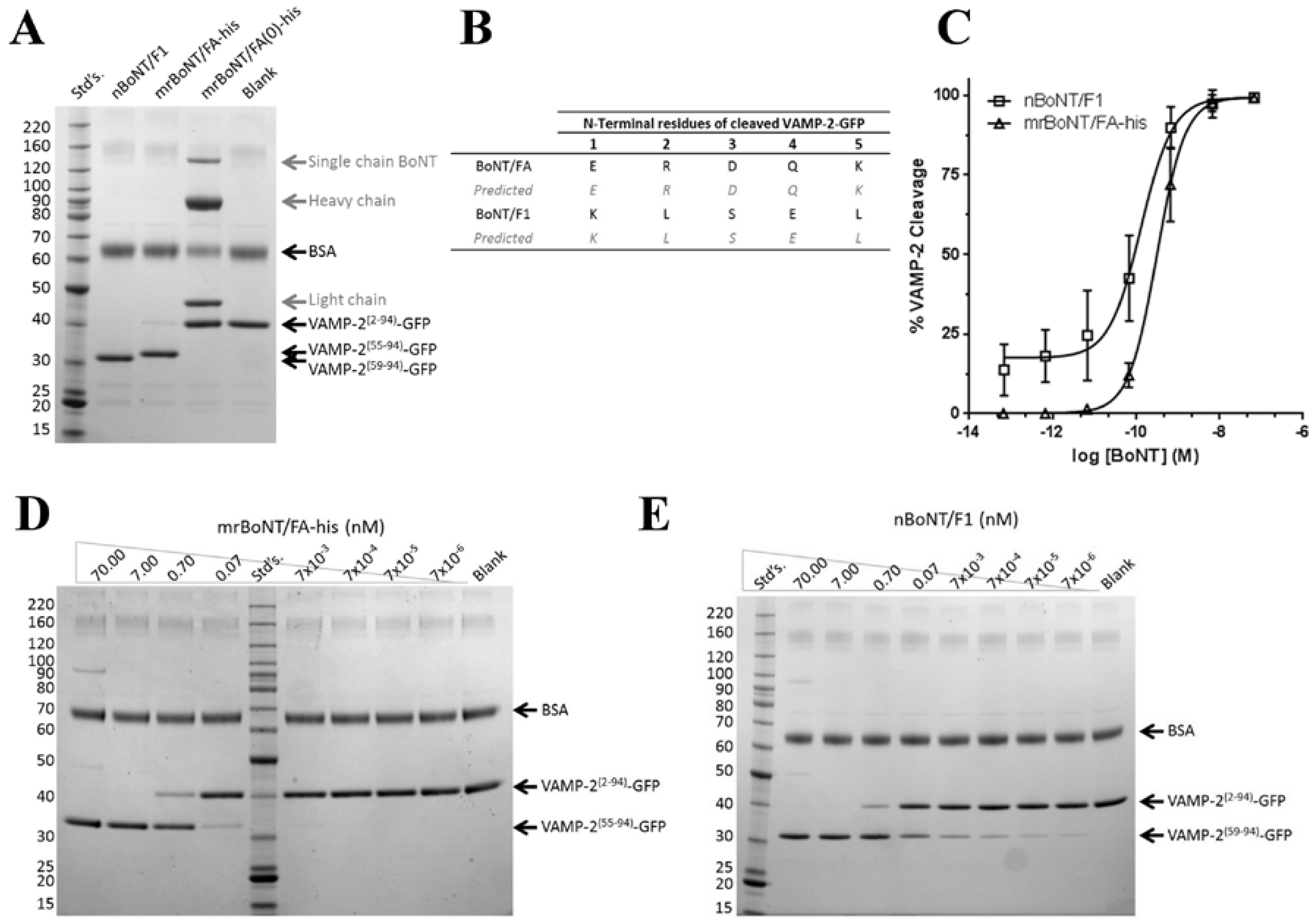 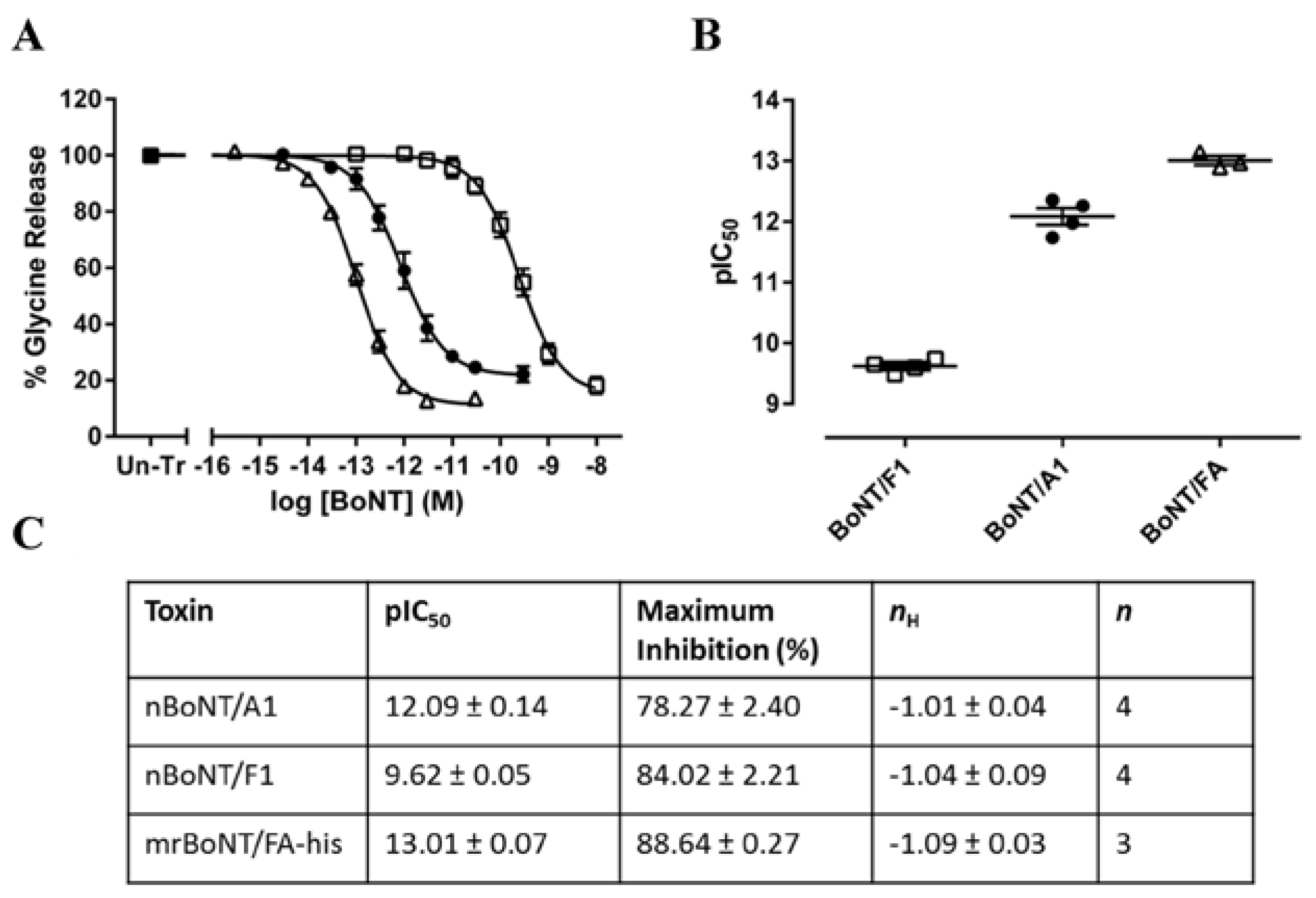 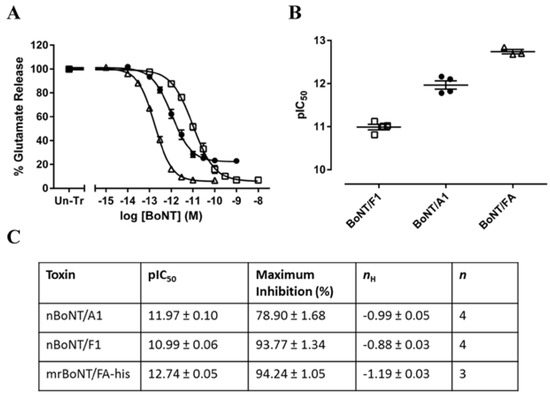 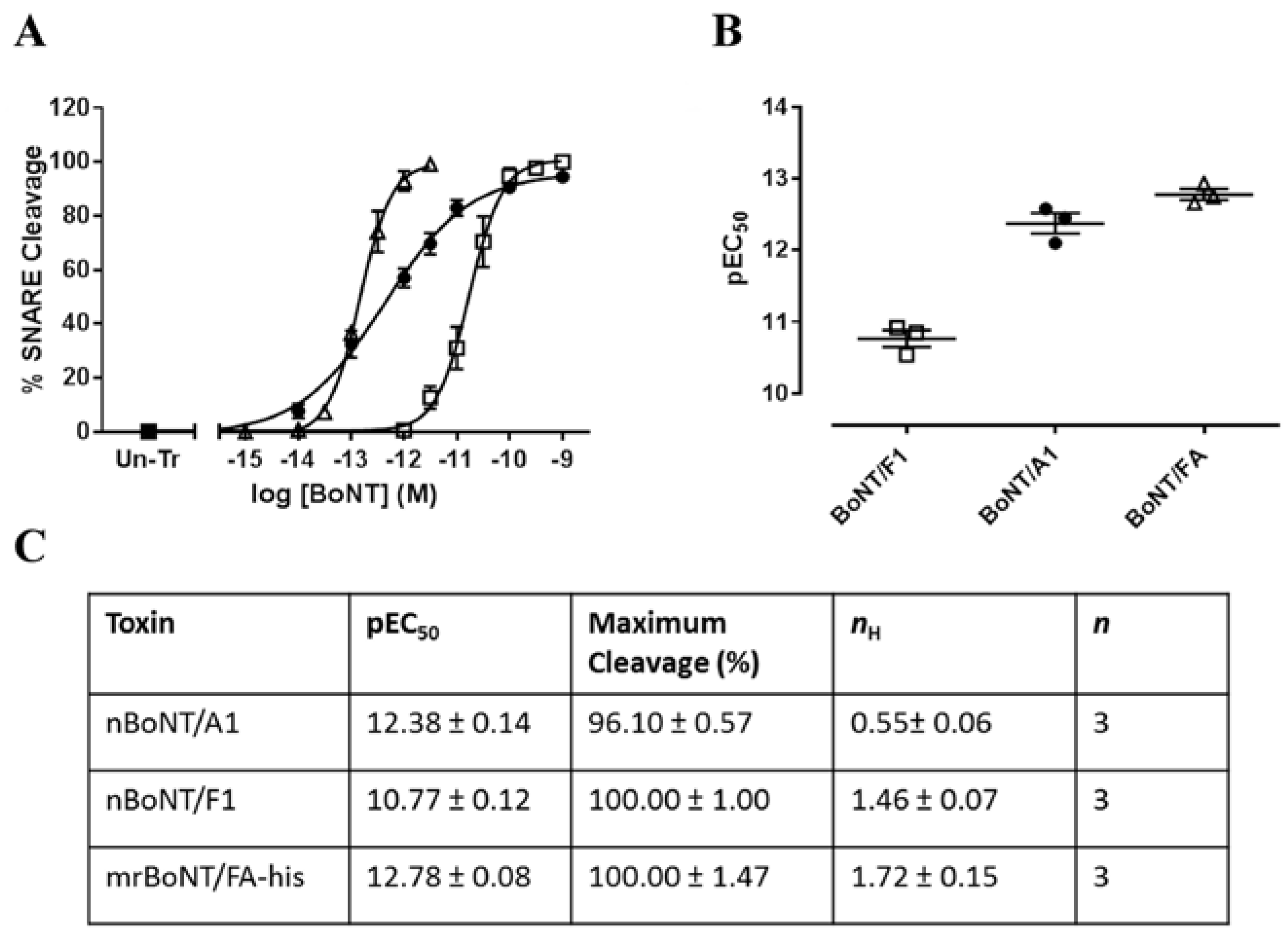