Variation in the Microbiome, Trichothecenes, and Aflatoxins in Stored Wheat Grains in Wuhan, China

Contamination by fungal and bacterial species and their metabolites can affect grain quality and health of wheat consumers. In this study, sequence analyses of conserved DNA regions of fungi and bacteria combined with determination of trichothecenes and aflatoxins revealed the microbiome and mycotoxins of wheat from different silo positions (top, middle, and bottom) and storage times (3, 6, 9, and 12 months). The fungal community in wheat on the first day of storage (T0) included 105 classified species (81 genera) and 41 unclassified species. Four species had over 10% of the relative abundance: Alternaria alternata (12%), Filobasidium floriforme (27%), Fusarium graminearum (12%), and Wallemia sebi (12%). Fungal diversity and relative abundance of Fusarium in wheat from top silo positions were significantly lower than at other silo positions during storage. Nivalenol and deoxynivalenol in wheat were 13–34% higher in all positions at 3 months compared to T0, and mycotoxins in wheat from middle and bottom positions at 6 to 12 months were 24–57% higher than at T0. The relative abundance of toxigenic Aspergillus and aflatoxins were low at T0 and during storage. This study provides information on implementation and design of fungus and mycotoxin management strategies as well as prediction models. View Full-Text
Keywords: deoxynivalenol; fungal diversity; Fusarium graminearum; metagenomics; nivalenol; wheat storage deoxynivalenol; fungal diversity; Fusarium graminearum; metagenomics; nivalenol; wheat storage
►▼ Show Figures 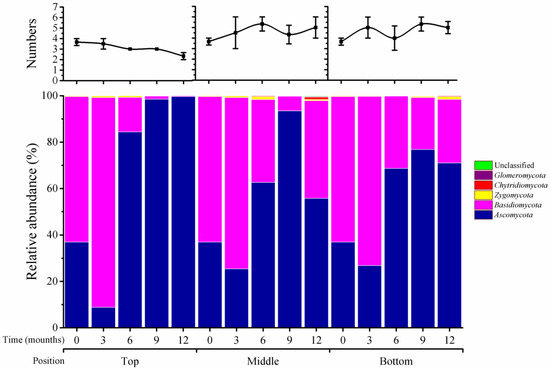