The Effects of Deoxynivalenol and Zearalenone on the Pig Large Intestine. A Light and Electron Microscopy Study
Next Article in Special Issue

Cyanobacteria synthesize a large variety of secondary metabolites including toxins. Microcystins (MCs) with hepato- and neurotoxic potential are well studied in bloom-forming planktonic species of temperate and tropical regions. Cyanobacterial biofilms thriving in the polar regions have recently emerged as a rich source for cyanobacterial secondary metabolites including previously undescribed congeners of microcystin. However, detection and detailed identification of these compounds is difficult due to unusual sample matrices and structural congeners produced. We here report a time-efficient liquid chromatography-mass spectrometry (LC-MS) precursor ion screening method that facilitates microcystin detection and identification. We applied this method to detect six different MC congeners in 8 out of 26 microbial mat samples of the Svalbard Archipelago in the Arctic. The congeners, of which [Asp3, ADMAdda5, Dhb7] MC-LR was most abundant, were similar to those reported in other polar habitats. Microcystins were also determined using an Adda-specific enzyme-linked immunosorbent assay (Adda-ELISA). Nostoc sp. was identified as a putative toxin producer using molecular methods that targeted 16S rRNA genes and genes involved in microcystin production. The mcy genes detected showed highest similarities to other Arctic or Antarctic sequences. The LC-MS precursor ion screening method could be useful for microcystin detection in unusual matrices such as benthic biofilms or lichen. View Full-Text
Keywords: arctic; benthic mats; cyanotoxins; ELISA; 16S rRNA gene arctic; benthic mats; cyanotoxins; ELISA; 16S rRNA gene
►▼ Show Figures 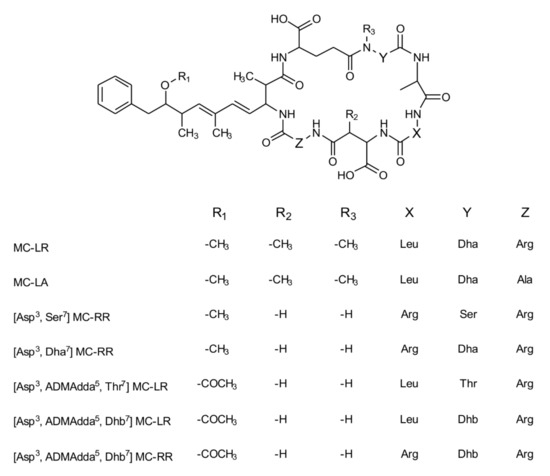