The Impact of Warming and Nutrients on Algae Production and Microcystins in Seston from the Iconic Lake Lesser Prespa, Greece
Previous Article in Journal

Warming climate is predicted to promote cyanobacterial blooms but the toxicity of cyanobacteria under global warming is less well studied. We tested the hypothesis that raising temperature may lead to increased growth rates but to decreased microcystin (MC) production in tropical Microcystis strains. To this end, six Microcystis strains were isolated from different water bodies in Southern Vietnam. They were grown in triplicate at 27 °C (low), 31 °C (medium), 35 °C (high) and 37 °C (extreme). Chlorophyll-a-, particle- and MC concentrations as well as dry-weights were determined. All strains yielded higher biomass in terms of chlorophyll-a concentration and dry-weight at 31 °C compared to 27 °C and then either stabilised, slightly increased or declined with higher temperature. Five strains easily grew at 37 °C but one could not survive at 37 °C. When temperature was increased from 27 °C to 37 °C total MC concentration decreased by 35% in strains with MC-LR as the dominant variant and by 94% in strains with MC-RR. MC quota expressed per particle, per unit chlorophyll-a and per unit dry-weight significantly declined with higher temperatures. This study shows that warming can prompt the growth of some tropical Microcystis strains but that these strains become less toxic. View Full-Text
Keywords: cell quota; climate change; cyanobacterial blooms; cyanotoxins; Mekong delta; Vietnam cell quota; climate change; cyanobacterial blooms; cyanotoxins; Mekong delta; Vietnam
►▼ Show Figures 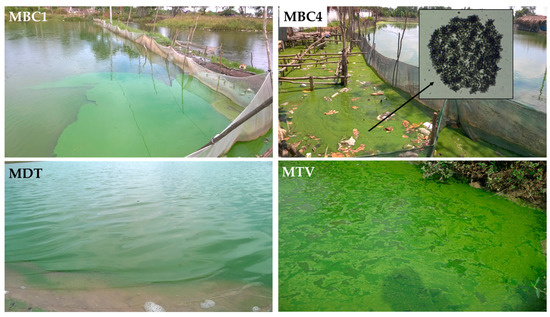