The insecticidal crystal proteins from Bacillus thuringiensis (Bt) are widely-used biopesticides that are used both as Bt spore-crystal preparations in sprayable formulations and as activated toxins in genetically modified (GM) plants. Models for their modes of action have been proposed but many issues remain unresolved. Among those is the role of commensal gut bacteria in target insect death: previous studies showed that antibiotics attenuate the toxicity of Bt sprays. We tested whether antibiotics interfere with the effects of GM plant-produced Bt toxins in larvae of two Lepidopteran species, the European corn borer Ostrinia nubilalis and the cotton leafworm Spodoptera littoralis. The larvae were reared on artificial diet with or without antibiotics and, thereafter, fed two varieties of Bt GM maize in comparison to conventional non-Bt maize leaves sprayed with antibiotic solution and/or with a Bt formulation. Antibiotics significantly reduced or delayed the toxicity of Cry toxins, although to a lesser extent than previously reported for Bt-sprays. This supports the hypothesis that Cry toxins induce mortality by themselves in the absence of Bt bacteria and spores, and of commensal gut bacteria. However, larvae that were not treated with antibiotics died faster and at a higher rate which was further compounded by plant variety and species sensitivity. These findings support a hypothesis that toxicemia alone can inflict significant mortality. However, in the absence of antibiotics, the gut bacteria likely enhance the Cry toxin effect by inflicting, additionally, bacterial septicemia. This has important implications in field situations where antibiotic substances are present—e.g., from manure of animals from conventional production systems—and for ecotoxicological testing schemes of Bt toxins and nontarget organisms that are often using artificial diets enriched with high concentrations of antibiotics. View Full-Text
Keywords: ecotoxicology; Bacillus thuringiensis; Cry toxins; antibiotics; nontarget organisms; lepidoptera ecotoxicology; Bacillus thuringiensis; Cry toxins; antibiotics; nontarget organisms; lepidoptera
►▼ Show Figures 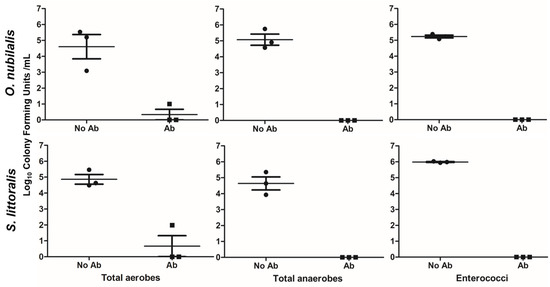