Solasonine was reported to inhibit tumour cell growth in several different models. The in vivo toxicity of solasonine, the effects of genetic background on its toxicity, and its possible roles in regulating the expression of cyp450 family genes were still unclear and required characterisation. Here, Horn’s assays were performed on male mice from four different strains, and the expression of cyp450 family genes in their livers was examined by RT-PCR and ELISA. Mice treated by intraperitoneal injection with high levels of solasonine showed immediate post-excitatory depression, intraperitoneal tissue adhesion, and dissolving of cells in the liver. Furthermore, these four mouse strains showed different toxicological sensitivity to solasonine. The strains, in decreasing order of LD50 value, rescuing speed of body weight, and more severe pathological symptoms, were KM, ICR, C57BL/6, and BALB/c. Interestingly, more cyp450 genes were downregulated at the mRNA and/or protein level in the livers of male mice from C57BL/6 or BALB/c strains than those from KM or ICR strains. These results suggest that (1) Solasonine has hepatic toxicity and downregulates cyp450 genes expression at transcriptional and/or post-transcriptional levels; (2) Genetic background is an important factor which can affect the in vivo toxicity; (3) Downregulation of cyp450 gene expression in the liver may be a clue to help understand whether or not a given strain is sensitive to solasonine; (4) Influences on the expression of cyp450 genes should be considered when using solasonine alone, or in combination with other drugs. View Full-Text
Keywords: solasonine; genetic background; in vivo toxicity; cyp450 family gene expression solasonine; genetic background; in vivo toxicity; cyp450 family gene expression
►▼ Show Figures 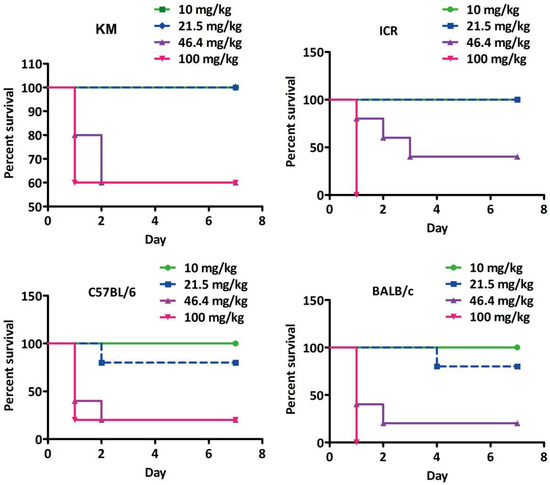