The aim of the current study was to determine the effect of a daily intake of three grams of cinnamon over eight weeks on glycemic indicators, advanced glycation end products, and antioxidant status in patients with type 2 diabetes. In a double-blind, randomized, placebo controlled clinical trial study, 44 patients with type 2 diabetes, aged 57 ± 8 years, were randomly assigned to take either a three g/day cinnamon supplement (n = 22) or a placebo (n = 22) for eight weeks. We measured the fasting blood glucose, insulin, hemoglobinbA1c, homeostasis model assessment for insulin resistance (HOMA-IR), carboxymethyl lysine, total antioxidant capacity, and malondialdehyde levels at the beginning and the end of the study. Thirty-nine patients (20 in the intervention group and 19 in the control group) completed the study. After an eight-week intervention, changes in the level of fasting blood glucose, insulin, hemoglobinbA1c, HOMA-IR, carboxymethyl lysine, total antioxidant capacity, and malondialdehyde were not significant in either group, nor were any significant differences between groups observed in these glycemic and inflammatory indicators at the end of the intervention. Our study revealed that cinnamon supplementation had no significant effects on glycemic and inflammatory indicators in patients with type 2 diabetes. View Full-Text
Keywords: type 2 diabetes; cinnamon; glycemic indices; inflammatory indicators type 2 diabetes; cinnamon; glycemic indices; inflammatory indicators
►▼ Show Figures 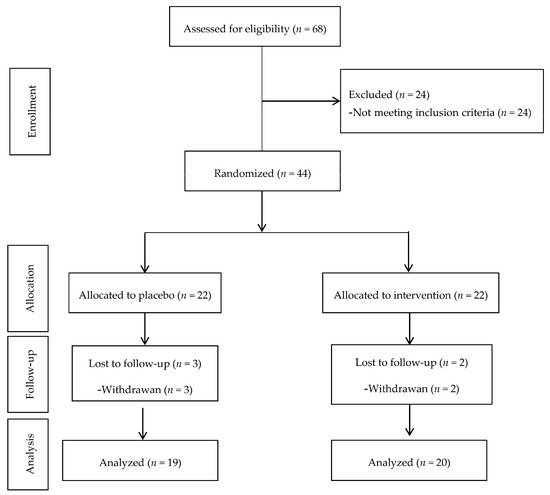