The Anti-Inflammatory and Antioxidant Potential of Pistachios (Pistacia vera L.) In Vitro and In Vivo
Previous Article in Journal

Prevention and Therapy of Type 2 Diabetes—What Is the Potential of Daily Water Intake and Its Mineral Nutrients?

Growing evidence supports the role of probiotics in reducing the risk of necrotizing enterocolitis, time to achieve full enteral feeding, and late-onset sepsis (LOS) in preterm infants. As reported for several neonatal clinical outcomes, recent data have suggested that nutrition might affect probiotics’ efficacy. Nevertheless, the currently available literature does not explore the relationship between LOS prevention and type of feeding in preterm infants receiving probiotics. Thus, the aim of this systematic review and meta-analysis was to evaluate the effect of probiotics for LOS prevention in preterm infants according to type of feeding (exclusive human milk (HM) vs. exclusive formula or mixed feeding). Randomized-controlled trials involving preterm infants receiving probiotics and reporting on LOS were included in the systematic review. Only trials reporting on outcome according to feeding type were included in the meta-analysis. Fixed-effects models were used and random-effects models were used when significant heterogeneity was found. The results were expressed as risk ratio (RR) with 95% confidence interval (CI). Twenty-five studies were included in the meta-analysis. Overall, probiotic supplementation resulted in a significantly lower incidence of LOS (RR 0.79 (95% CI 0.71–0.88), p < 0.0001). According to feeding type, the beneficial effect of probiotics was confirmed only in exclusively HM-fed preterm infants (RR 0.75 (95% CI 0.65–0.86), p < 0.0001). Among HM-fed infants, only probiotic mixtures, and not single-strain products, were effective in reducing LOS incidence (RR 0.68 (95% CI 0.57–0.80) p < 0.00001). The results of the present meta-analysis show that probiotics reduce LOS incidence in exclusively HM-fed preterm infants. Further efforts are required to clarify the relationship between probiotics supplementation, HM, and feeding practices in preterm infants. View Full-Text
Keywords: late-onset sepsis; probiotic; preterm infants; human milk; meta-analysis late-onset sepsis; probiotic; preterm infants; human milk; meta-analysis
►▼ Show Figures 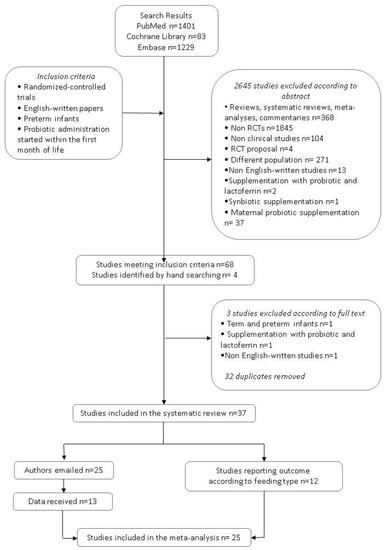