What Is Nutritious Snack Food? A Comparison of Expert and Layperson Assessments
Previous Article in Journal

Propolis is an important hive product and considered beneficial to health. However, evidence of its potential for improving gut health is still lacking. Here we use rats to examine whether dietary supplementation with propolis could be used as a therapy for ulcerative colitis. Rats were fed with a Western style diet alone (controls) or supplemented with different amounts of Chinese propolis (0.1%, 0.2%, and 0.3%) to examine effects on acute colitis induced by 3% dextran sulphate sodium (DSS) in drinking water. Propolis at 0.3%, but not lower levels, significantly improved colitis symptoms compared with the control group, with a less pronounced disease activity index (DAI) (p < 0.001), a significant increase in colon length/weight ratio (p < 0.05) and an improved distal colon tissue structure as assessed by histology. Although short chain fatty acid levels in digesta were not altered by propolis supplementation, 16S rRNA phylogenetic sequencing revealed a significant increase in gut microbial diversity after 21 days of 0.3% propolis supplementation compared with controls including a significant increase in bacteria belonging to the Proteobacteria and Acidobacteria phyla. This is the first study to demonstrate that propolis can attenuate DSS-induced colitis and provides new insight into diet-microbiota interactions during inflammatory bowel disease.
Keywords: propolis; rats; colitis; gut microbiota propolis; rats; colitis; gut microbiota

Inflammatory bowel disease (IBD), which includes Crohn’s disease (CD) and ulcerative colitis (UC), is a chronic disorder of the gastrointestinal tract characterized by inflammation. Individuals with UC typically suffer with recurrent inflammation of the colon whereas in CD patients the inflammatory responses can occur in the terminal ileum and colon [1]. Although the precise aetiology of IBD still remains unknown, and there are some cases reporting genetic susceptibility of some individuals, a dysbiosis of the gut microbiota remains a consistent underlying feature [2]. Environmental factors, diet and lifestyle have also been widely recognized as potential triggers for IBD. Recent rapid increases in the incidence of IBD in developing countries have occurred along with considerable shifts toward Western style dietary habits [3]. Dietary intervention is also being considered as a means of IBD prevention or treatment, due to the significant influence it has on the metabolism and diversity of gut microbiota populations [4,5].
Recent studies suggest there are beneficial effects of polyphenol-rich foods on human health, and may provide promising alternative approaches to preventing or treating chronic diseases, including IBD [6]. Polyphenolic constituents which possess potent antioxidant activities function not only as free-radical scavengers, but also modulators of cellular redox signalling pathways during different physiological/pathological stages. Their anti-inflammatory activities are also widely acknowledged since they inhibit the production and the release of several inflammatory mediators like interleukins, tumour necrosis factor, nitric oxide, etc. [6]. More importantly, recent evidence suggests that dietary polyphenols modulate human intestinal microbial populations due to their bacteriostatic or bactericidal actions [7], which could be of particular value for treating IBD given the apparent role of gut microbes as a contributor to the condition.
Propolis is a resinous substance collected by honeybees, Apis mellifera, from various plant sources, which contains abundant polyphenolic compounds [8]. Our previous studies using different animal models showed that polyphenol-rich propolis extracts exhibited significant anti-inflammatory effects, probably via modulating the production of key inflammatory mediators and by blocking the activation of NF-κB [9,10]. Propolis’ chemical properties vary slightly depending on the geographic location from which it is derived, but a broad spectrum of bioactivities including anti-inflammatory effects are consistently present, suggesting it could be used to treat diseases, such as IBD.
Here, we describe a study to determine whether the addition of a Chinese propolis extract to a Western style diet can reduce the severity of colitis induced by dextran sulphate sodium (DSS) in rats and using this model to examine the contribution that the gut microbiota may play in this protection. The major shifts in population of microbiota in DSS-induced colitis in rats are similar to those in human UC [11,12] and we will examine the contribution that the gut microbiota may play in any protection observed with dietary propolis in this model.

Male Sprague Dawley rats (six-week old, ~185 g) were obtained from Laboratory Animal Services, University of Adelaide, Australia. Animal experimental procedures were approved by the CSIRO Animal Ethics Committee (SA), Australia and carried out in accordance with the code for the care and use of animals for scientific purposes (ethic approval code: 803-12/15). Throughout the study they were housed in stainless-steel cages with wire-mesh bottoms within a temperature (22 ± 2 °C) and humidity-controlled (80 ± 10%) animal facility with a 12 h light/dark cycle and had free access to feed and water. Rats were acclimatized for seven days before the experimental diets started. During acclimatization rats consumed a standard commercially-available chow. The animals were randomly divided into four treatment groups of equal size (n = 8/group) with comparable initial body weights. The experimental diets were a modification of the AIN 93G diet in which protein and fat levels were increased to 25% and 20%, respectively, to approximate a Western style diet (Table 1) which was supplemented with 0% (control), 0.1%, 0.2%, or 0.3% of a Chinese propolis extract. The Chinese propolis extract (poplar type) was obtained from the same batch used in a previously described study and for which the chemical constituents were analysed [13]. Propolis was added to the diet by first dissolving it in the oil used as the fat source. The diets were fed in a pelleted form. Rats consumed the experimental diets for 21 days. After the first seven days on the experimental diets, dextran sulphate sodium (DSS; molecular weight 36–50 kDa; MP Biomedicals) was added to the drinking water at a level of 3% for a period of seven days, after which all rats again received standard tap water without DSS for another seven days. At the completion of the 21 days of the experimental diets rats were anaesthetised with 4% isofluorane/oxygen and killed to enable tissue collection. An additional five rats which did not receive DSS but which did receive the Western style diet containing the control (0% DSS) diet were also included in the study and killed along with the other rats.
A limited repeat of the above study (carried out in Australia) was performed in China using the same methods for the purpose of obtaining digesta for microbiota and histology analyses. The China-based activities were approved by the Animal Care and Use Committee of Zhejiang University, China, and the animals provided by the Laboratory Animal Services Centre, Zhejiang University (ethic approval code: AEC-160301). In that study twenty-four rats were randomly divided into three equal groups (n = 8/group). One group received 21 days of 0% propolis supplementation of the Western style diet and another 0.3% propolis supplementation. The remaining group received the Western style diet with 0% propolis but did not receive any DSS treatment.

For histological examination, distal colon tissues were flushed with chilled phosphate-buffered saline (PBS, pH 7.2) fixed in neutral buffered formalin, dehydrated in a graded ethanol series and embedded in paraffin. Tissue sections were stained with haematoxylin and eosin (H and E) and observed under a light microscopy. Colonic histological damage was scored based on two subscores (cell infiltration and tissue damage), ranging from 0–6 (no changes to extensive cell infiltration and tissue damage) [15]. Infiltration of inflammatory cells were counted as 0 (rare inflammatory cells in the lamina propria) to 3 (transmural extension of the infiltration of inflammatory cells). Tissue damage were counted as 0 (no mucosal damage) to 3 (extensive mucosal damage and extension through deeper structures of the bowel wall).

Weighed portions of cecal digesta collected from rats at the time of kill were diluted at 1:3 (w/w) with deionised water containing 1.68 mmol heptanoic acid/L as an internal standard (Sigma Chemical Co., St. Louis, MO, USA). Acetate, butyrate, propionate, and the total SCFA (including minor SCFA) were determined in the caecal contents of rats as described previously using a gas chromatography system as reported previously [16].

2.5. Measurement of the Gut Microbiota

Data on bodyweights, organ weights, DAI, and digesta SCFA are presented as the arithmetic mean ± SEM for each treatment group. The effect of treatments was determined by one-way ANOVA and differences between treatments were analysed post-hoc by Tukey’s honest significant difference test. p-values of less than 0.05 were considered statistically significant. All statistical tests were carried using SPSS version 17.0.

3.1. Effects of Propolis on Colitis Symptoms

The daily DAI of rats in each of the treatment groups is shown in Figure 1a. DSS treatment significantly increased DAI (p < 0.001). We also measured the DAI of untreated controls but the values were zero (data now shown). Administration of 0.3% propolis significantly lowered the DAI (p < 0.01 or p < 0.001) (D6 to D9). Rats fed 0.1% propolis had significantly lower weight gain than controls during DSS treatment but the 0.2% and 0.3% doses of propolis did not alter weight gain in rats during this period. No significant differences in final bodyweights were observed (Figure 1b) nor did any treatment alter the weights (as a proportion of body weight) of the liver, spleen, kidneys and fat pads (Table 2). However, the 0.3% propolis-fed rats had a significantly greater colon length/weight ratio than untreated controls (Figure 1c, p < 0.05). For reference, the body weight gain data, colon length/weight ratio and organ weight from untreated control rats are shown in the Supplementary Table S1. Histological examination of the distal colon of rats treated with DSS showed severe microscopic inflammation of the mucosa, as indicated by ulceration, oedema, crypt damage, and infiltration the intestinal epithelial layer. Compared to rats in the DSS (0% propolis) group, 0.3% propolis reduced histologic evidence of DSS-induced colitis (Figure 1d).

Caecal digesta SCFA levels are shown in Table 3. Addition of propolis to the diet resulted in significantly lower caecal pools of acetate and total SCFA in rats consuming 0.2% propolis when compared to the 0.1% propolis group. No other differences in SCFA levels were observed. Caecal tissue weight, digesta weight and pH were unaffected by propolis treatment. For reference, the caecal digesta SCFA, tissue weight, digesta weight, and pH from untreated control rats are shown in the Supplementary Table S2.

3.3. Propolis Altered the Composition of the Intestinal Microbiota in Colitis Rats

16S rRNA phylogenetic approach was used to compare caecal microbial populations of the 0% propolis, 0.3% propolis and non-DSS treated rats. A mean of 37,362 (20,793–51,692) effective tags were observed following sequencing. Sequences with at least 97% similarity were clustered into Operational Taxonomic Units (OTUs). The alpha diversity of microbial communities, as indicated by the Shannon index, was reduced significantly by DSS treatment and propolis significantly increased the microbial diversity (p < 0.05, Figure 2a). We also assessed the microbial communities based on the weighted UniFrac distances among the untreated control, 0% propolis and 0.3% propolis groups, obtained data clearly revealed showed propolis supplement caused a significant difference in microbial beta diversity (p < 0.001, Figure 2b). Additionally, the structure of the gut microbiota was further studied by weighted PCoA analysis and we noticed that gut microbiota was clearly modulated by propolis supplement and DSS (Figure 2c). A Venn diagram (Figure 2d), displaying the overlapping OTU data for the three groups, shows that 722 of 1405 OTUs accounting for the total richness were universal to all the samples, and that 440 OTUs of the 0.3% propolis group were distinct from the other two groups. At a phylum level, Firmicutes and Bacteroidetes were predominant in the DSS (0% propolis) and untreated control groups, with only a very small proportion of other phyla. However, these two phyla represented a much smaller proportion of the microbes in the 0.3% propolis treatment group (Figure 2e) with Proteobacteria, Acidobacteria and other microbes increasing to constitute a greater relative proportion of the population.

In conclusion, our studies show for the first time that dietary supplementation with Chinese propolis can protect against DSS-induced colitis in rats consuming a Western-style diet. Increases in gut microbiota, including bacteria of the phyla Proteobacteria and Acidobacteria, may contribute to the protection. Clinical investigations are warranted to assess whether our promising findings can be translated into a therapy for IBD. 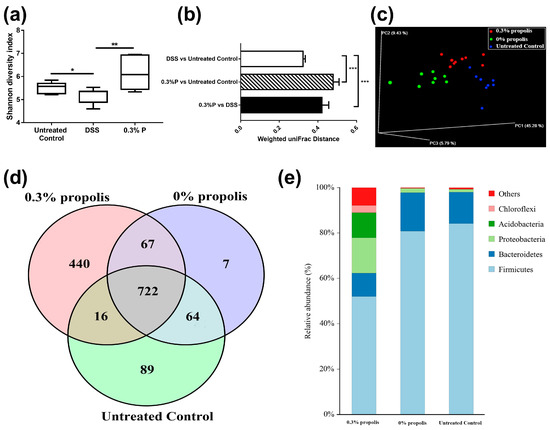 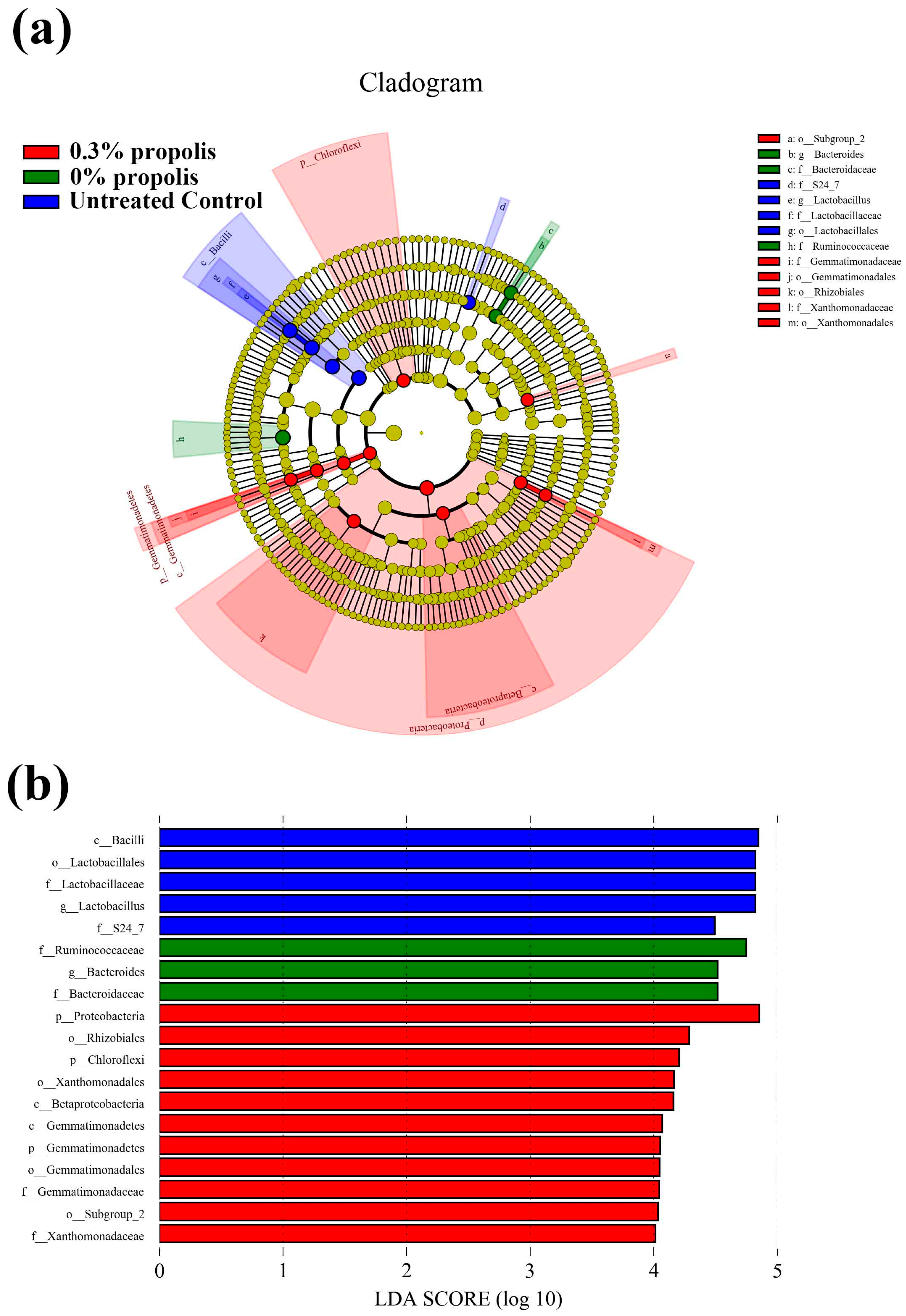