Vitamin C Status Correlates with Markers of Metabolic and Cognitive Health in 50-Year-Olds: Findings of the CHALICE Cohort Study
Previous Article in Journal

Diabetic nephropathy is a common microvascular complication in diabetic patients, which leads to high morbidity and mortality throughout the world [1,2]. Diabetic nephropathy is characterized by structural as well as functional abnormalities. Urinary albumin excretion along with extracellular matrix accumulation, basement membrane thickening, mesangial hypertrophy, and glomerular epithelial cell (podocyte) loss within the glomeruli are characteristic pathological features of diabetic nephropathy [3,4].
Especially, changes in glomeruli such as fibrosis and apoptosis of mesangial cells play important roles in the progression of diabetic nephropathy. The hyperglycemic condition induces expression of genes associated with fibrosis, such as transforming growth factor-β (TGF-β), fibronectin, collagen type IV, α2 (Col4a2), and plasminogen activator inhibitor-1 (PAI-1) [5,6]. Moreover, activation of apoptotic programs such as nuclear condensation, caspase activation, and release of cytochrome c from mitochondria are observed in high glucose-treated mesangial cells [7,8].
Intensive blood glucose control and anti-hypertensive agents such as angiotensin converting enzyme inhibitors and angiotensin receptor-1 antagonists are currently the most effective treatments for progressive diabetic nephropathy [9]. However, there are several limitations to these drugs, such as patient resistance and heart or kidney failure [10,11]. Therefore, the development of new drugs or adjuvants that act on various components of diabetic nephropathy is urgently required.
Psoralea corylifolia L. seed (PCS), commonly known as “Boh-Gol-Zhee” in Korea, has been used in herbal and traditional medicine for various diseases including diabetes, cancer, inflammatory disease, neurodegenerative disease, and kidney disease [12]. Six compounds, bakuchiol, psoralen, isopsoralen, corylifolin, corylin, and psoralidin, are the major components of PCS extract [13]. Among these, bakuchiol, which is a meroterpene, and psoralen and isopsoralen, which are coumarins, have been widely studied, and their health benefits regarding anti-oxidant, anti-tumor, and estrogenic activity have been identified [14,15,16,17].
Previously, we found that PCS extract shows protective effects on oxidative stress-induced pancreatic beta cell apoptosis [18] and hepatic damage [19]. Furthermore, PCS extract shows promise as an anti-obesity agent in a high fat diet-induced obesity model [20], suggesting that PCS extracts might also have ameliorative effects on diabetic nephropathy. Therefore, we investigated whether PCS extracts have beneficial effects on diabetic nephropathy in a streptozotocin (STZ)-induced type 1 diabetic mouse model and investigated the mechanisms involved in high glucose-treated glomerular cells.

PCS was purchased from an oriental drug store (Kwang Myung Dang Co., Ulsan, Korea), and the extract was prepared by the standard procedure as described previously [18,19]. In summary, 300 grams of dry seed were ground into small pieces and then extracted twice with distilled water under reflux. The combined water extracts were evaporated in vacuo and finally yielded 61.92 g of a dark brown residue.

Six-week-old male C57BL/6 mice were supplied by the Orient Bio Inc (Seongnam, Gyeonggi-do, Korea). Animals were maintained at animal facilities at the Lee Gil Ya Cancer and Diabetes Institute, Gachon University of Medicine and Science, under a 12-h light, 12-h dark photoperiod. All animal experiments were carried out under a protocol approved by the Institutional Animal Care and Use Committee (LCDI-2012-0029) at Lee Gil Ya Cancer and Diabetes Institute, Gachon University. After a week of adaptation, mice were injected intraperitoneally with 50 mg/kg/day STZ for five consecutive days. Age-matched control mice received an equal volume of vehicle. After one week after the fifth STZ injection, blood glucose levels were checked, and mice with blood glucose levels over 300 mg/dL were used for experiments. STZ-induced diabetic mice were treated orally with PCS extract (500 mg/kg/day) or vehicle (daily for 8 weeks), as described previously [18,20]. Losartan potassium (Sigma-Aldrich) was orally administered (10 mg/kg/day) for 8 weeks as a positive control.

2.5. Biochemical Parameters in Blood and Urine

All data are expressed as mean ± standard error of at least three independent experiments. Data were analyzed using Analysis of Variance followed by post-hoc analysis using the Tukey range test (SPSS 10.0 statistical software). The p-values less than 0.05 were considered to be statistically significant.

To investigate the mechanisms and specific components of PCS extract responsible for the protective effect in the kidney of diabetic mice, in vitro studies were performed using mouse mesangial MES-13 cells. Bakuchiol, psoralen, and isopsoralen are known to be major components of PCS [13], and these are detected in the serum of the PCS extract-treated mice [18]. Therefore, we investigated whether these compounds protect MES-13 cells from high glucose-induced apoptosis using previously determined dose ranges that do not cause cell toxicity (Figure 4 and Figure S2). High glucose treatment significantly reduced cell viability compared with the control, and cell viability was not changed by mannitol treatment (Figure 4A), indicating that the effect is not due to osmotic pressure. Ten or 50 μg/mL of PCS extract recovered cell viability (Figure 4B). Low concentrations (0.5–2 μg/mL) of isopsoralen significantly enhanced cell viability in the presence of high glucose, whereas psoralen was only effective at a higher dose (4 μg/mL) (Figure 4C,D). Bakuchiol treatment (100 or 200 ng/mL) also significantly inhibited high glucose-induced cell death, but the effect was not observed at a higher concentration (500 ng/mL) (Figure 4E), and cell death was observed at concentrations above 500 ng/mL (Figure 4E and Figure S2). We also investigated the expression level of pro-apoptosis proteins after high glucose treatment with or without various compounds. As shown in Figure 4F, high glucose treatment increased the expression levels of cleaved PARP and Bad, and 50 μg/mL PCS extract, 4 μg/mL psoralen, 4 μg/mL isopsoralen, or 200 ng/mL bakuchiol reduced the expression of these proteins. The expression levels of phospho-Bad (ser112) and Bcl-2, pro-survival markers, were decreased by high glucose and increased by PCS extract or its components (Figure 4F).

3.4. PCS Extract or Its Components Reduced Expression of Fibrosis-Related Genes in Mesangial Cells

Diabetic nephropathy is the most serious complication in diabetes mellitus and causes glomerular fibrosis and impairment of renal function. Currently available drugs, which control blood glucose or blood pressure, have a number of limitations, such as patient resistance and high rates of secondary failure [10]. These lead to the search for alternative therapies from natural products that have low or no side effects and multi-target actions.
PCS extract has generated much interest due to its various biological activities, including anti-inflammation, anti-apoptosis, and anti-hyperglycemic effects [20,22,23], suggesting further study on its effect on diabetic complications such as nephropathy. Therefore, we investigated anti-diabetic nephropathy effects of PCS extract in STZ-induced diabetic mice, which develop renal injury with similarities to human diabetic nephropathy [24].
The increase in urinary albumin excretion, one of the marked renal pathological features in diabetic nephropathy, is caused by mesangial expansion due to accumulation of extracellular matrix components [25]. Our STZ-induced diabetic mice showed an increase in urinary albumin concentration and a corresponding increase in the mesangial matrix index relative to non-diabetic control mice. In addition, the level of creatinine clearance, the most widely used clinical marker of kidney function [26], was higher in diabetic mice than control mice, indicating the presence of diabetic nephropathy with renal hyperfiltration in our STZ-induced diabetic mice. Eight-weeks of PCS extract treatment attenuated the increased albuminuria, creatinine clearance, and mesangial expansion in the glomeruli of STZ-induced diabetic mice. These results demonstrated that PCS extract has potent effects by counteracting mesangial expansion and hyperfiltration in diabetic mice, possibly leading to the amelioration or delay in the development of advanced diabetic renal injury.
We observed that hyperfiltration induced by STZ injection led to a decrease in serum urea nitrogen levels, but administration of PCS extract did not recover this to normal levels. These results show lack of correlation with creatinine clearance and serum urea nitrogen, and this is consistent with another study in STZ-induced diabetic rats fed a high fat diet [27].
Previously, we reported that PCS extract treatment showed anti-hyperglycemic effects via reduced lipid accumulation and reduced inflammation in the liver of mice fed a high fat diet [20]. In the present study, treatment of diabetic mice with PCS extract ameliorated creatinine clearance and mesangial matrix accumulation, but had no impact on glucose homeostasis (Figure S1). These conflicting results might be the result of the different mechanisms used to induce different diabetic mouse models [28]: such as type 1 diabetes (present study) versus type 2 diabetes (previous study). Moreover, effect of PCS extract regarding improvement of renal injury was similar to the losartan-treated group, suggesting that PCS extract might directly improve kidney function by glucose-independent mechanisms.
Several studies have demonstrated that increased TGF-β expression in mesangial cells promotes extracellular matrix accumulation and hypertrophy during progression of diabetic nephropathy [29,30]. Moreover, as increased TGF-β is known to be a potent inducer of Col4a2, fibronectin, and PAI-1 expression [31], we investigated whether PCS extract reduced the expression of these molecules. Treatment with PCS extract inhibited the expression level of fibrosis markers both in the kidney tissue of diabetic mice and in high glucose-treated MES-13 mesangial cells, and also increased cell viability. These results show that the anti-fibrotic effects of PCS extract provided effective protection from high glucose-mediated kidney damage.
Apoptosis plays a pathological role leading to the death of mesangial cells, which is associated with progressive glomerulosclerosis [32,33]. Khera et al. reported that high glucose-mediated TGF-β activation decreases nuclear factor-kB activation and in turn, alters the expression ratio of Bcl-2:Bcl-2-associated X protein favoring caspase-3 activation and increased apoptosis [8]. We also found that expression level of apoptotic makers was increased under diabetic nephropathy conditions, and PCS extract treatment attenuated cleaved PARP and increased Bcl-2 expression and phosphorylation of Bad (Ser-112). Although we did not evaluate the correlation between fibrosis and apoptosis pathways in glucose-treated mesangial cells, these results suggest that inhibition of apoptosis under conditions of high glucose toxicity is an important mechanism of PCS extract in reducing glomerulosclerosis in diabetic nephropathy.
We found that treatment with major compounds of PCS extract (bakuchiol, psoralen, and isopsoralen) inhibited mesangial cell death, but the anti-apoptotic and anti-fibrotic responses varied. Two coumarins, psoralen and isopsoralen, increased cell viability and decreased apoptotic protein expression, and bakuchiol showed anti-apoptotic effects at much lower concentration compared with psoralen or isopsoralen. Similarly, previous studies found that psoralen or isopsoralen inhibits apoptotic cell death in H2O2-treated INS-1 cells [18] or palmitate-treated PC12 cells [34]. Psoralen or isopsoralen decreased mRNA expression level of fibronectin and PAI-1, suggesting that the effects of PCS extract in diabetic nephropathy was mediated primarily by these compounds. However, total PCS extract treatment significantly increased the expression of PAI-1. PCS extract contains other chemical compounds such as coryfolin, corylin, and 3-hydroxybakuchiol [13], which might have resulted in the increase of PAI-1 expression in apoptotic mesangial cells seen after PCS treatment.
It is known that the treatment of high glucose in mesangial cells increases the level of reactive oxygen species (ROS) [35,36]. Previously, we reported that PCS extract has an anti-oxidative effect in hepatocytes [19] and pancreatic beta cells [18], and this effect is mediated by improvement of mitochondrial function. As oxidative stress plays a role in the pathogenesis of diabetic nephropathy [37], possible involvement of the anti-oxidative effect of PCS extract in the inhibition of diabetic nephropathy will be investigated.

This study was supported by grants from Basic Science Research Program through the National Research Foundation of Korea (NRF) funded by the Ministry of Science, ICT & Future Planning (NRF 2016R1A2B2013347). 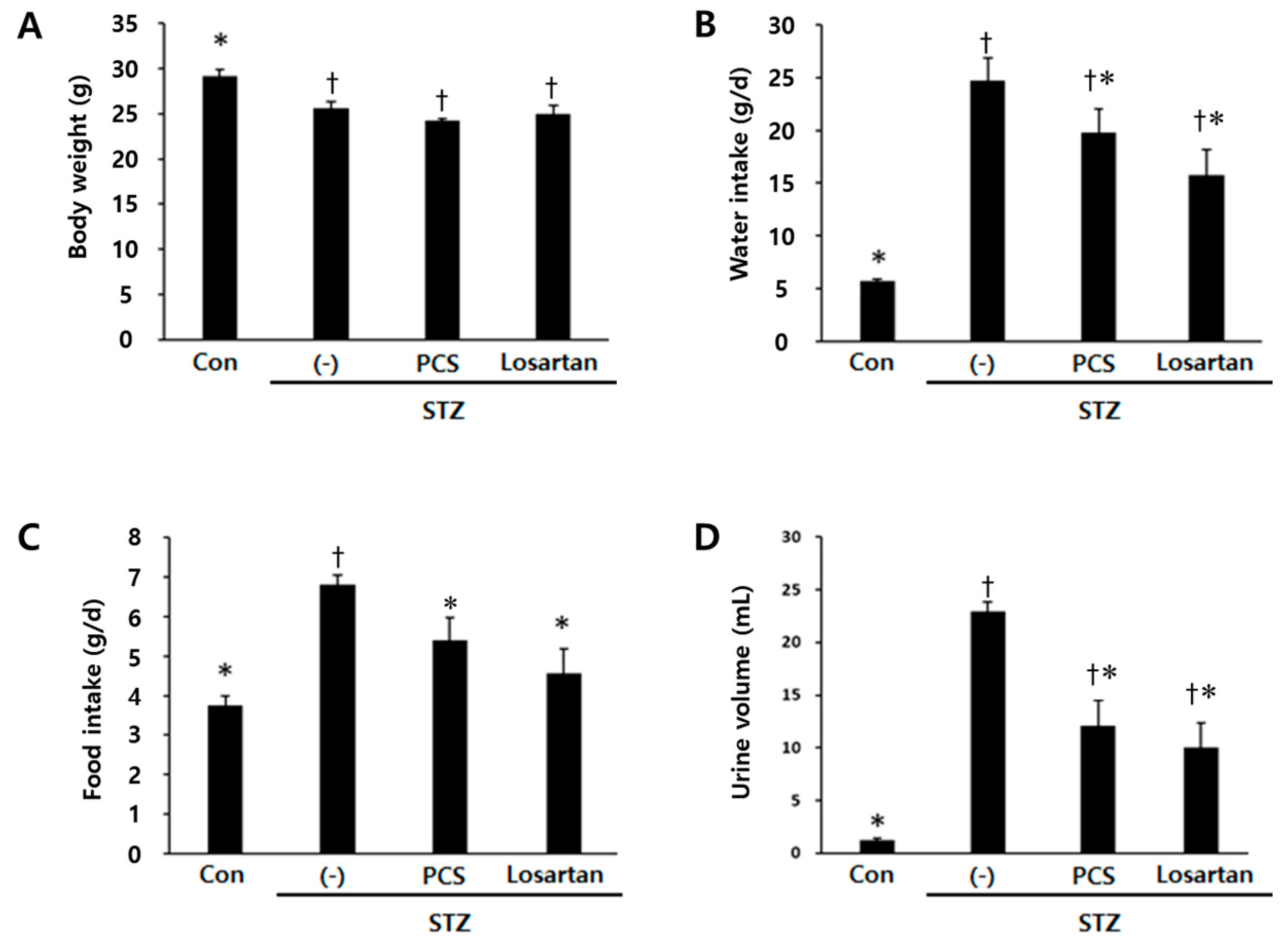 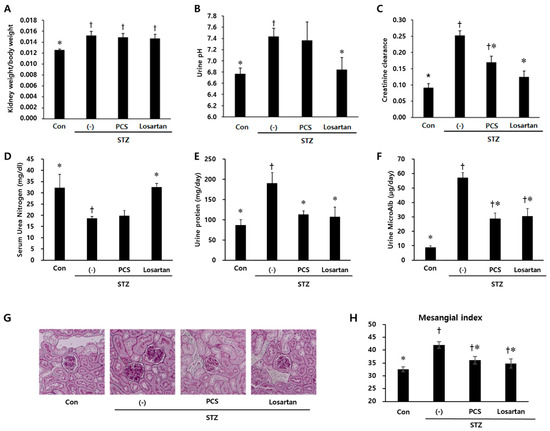 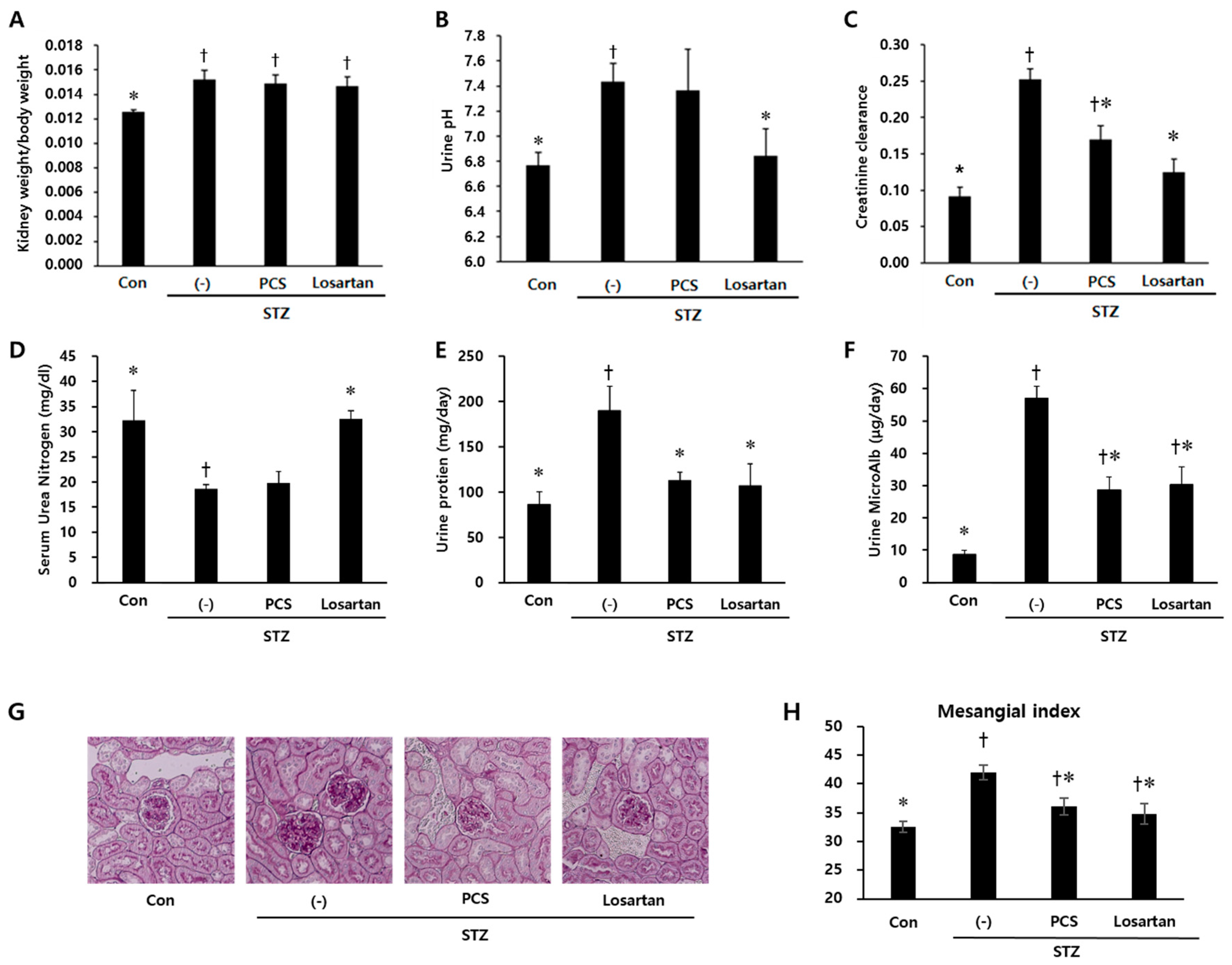 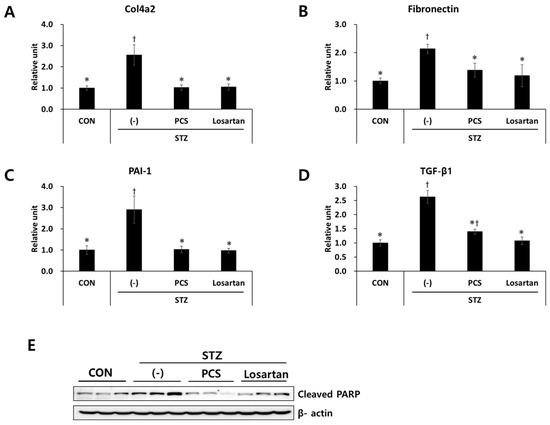 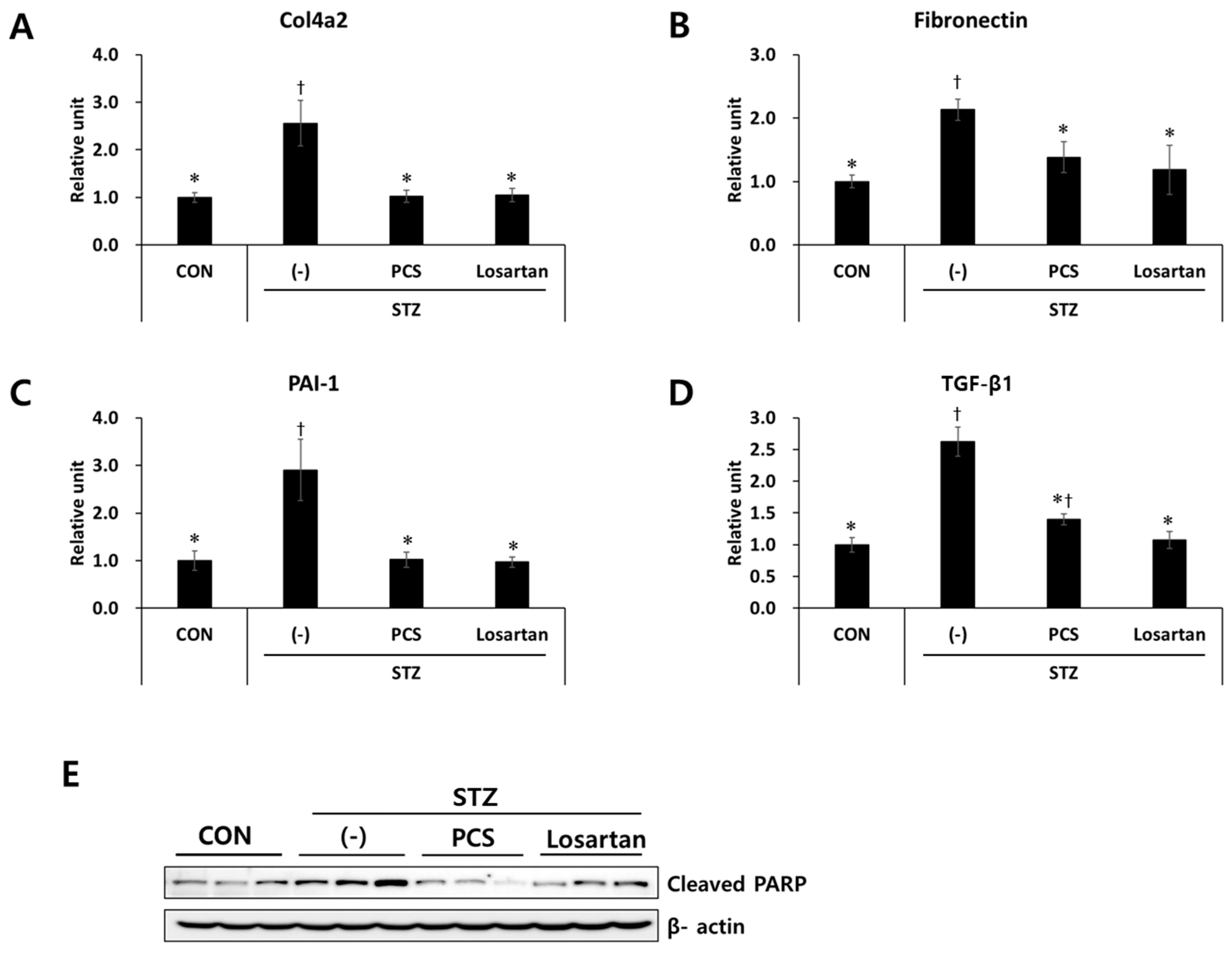 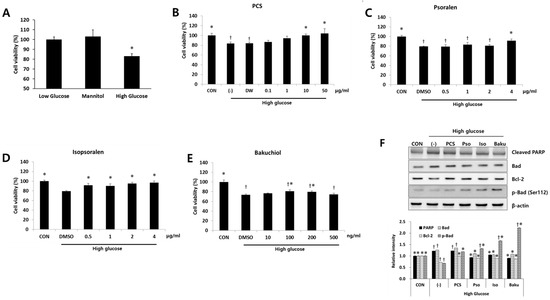 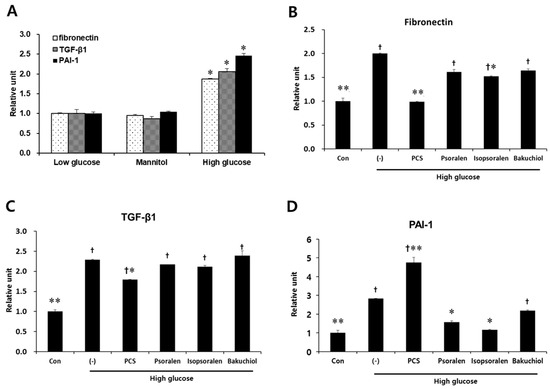 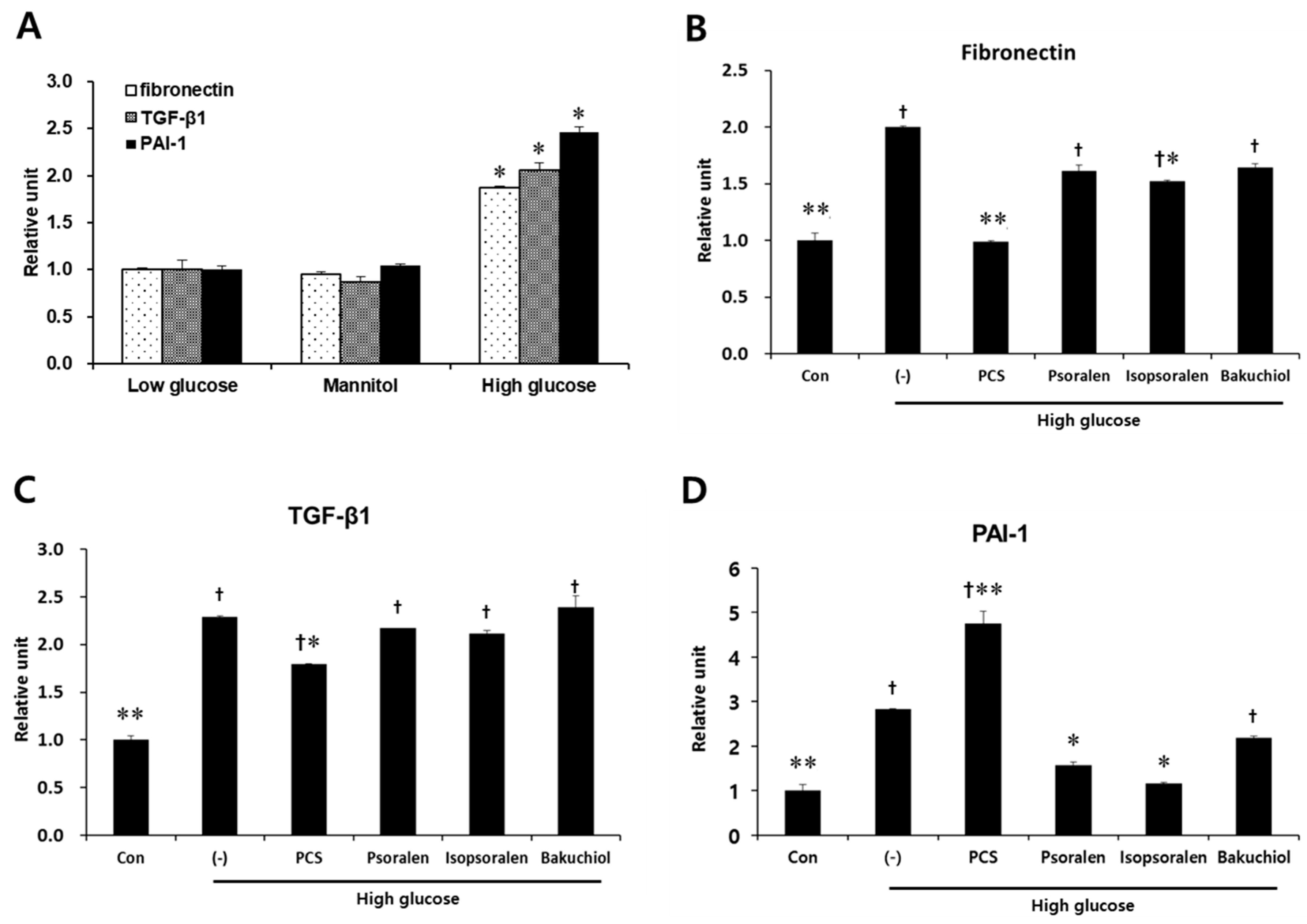