Effects of Carbohydrate and Glutamine Supplementation on Oral Mucosa Immunity after Strenuous Exercise at High Altitude: A Double-Blind Randomized Trial
Next Article in Special Issue

The association between vitamin C (vitC) deficiency and an increased risk of cardiovascular disease (CVD) in humans is well-established [1,2,3,4,5,6], though a mechanistic link is yet to be elucidated. VitC is an essential nutrient for humans and an estimated 10–15% of adults in the Western populations suffer from hypovitaminosis C (plasma concentration <23 μM) [7]. Pathologies of vascular diseases are characterized by changed vasomotion as a consequence of an imbalance in vasodilation and vasoconstriction, leading to abnormal blood flow regulation and organ dysfunction. In the vasculature, vitC is a key component in maintaining collagen integrity of blood vessels; prolonged severe deficiency ultimately leads to the development of bleedings and haematoma hallmarking scurvy. However, little is known about how non-scorbutic vitC deficiency affects the function of the vascular cells and the vasomotion of arterioles proximal to the capillaries.
In human endothelial cells in vitro, vitC has been shown to act as specific redox modulator in the nitric oxide (NO) synthesis essential for vasodilation [8]. Furthermore, vitC provides reducing equivalents in the conversion of dihydrobiopterin (BH2) to tetrahydrobiopterin (BH4) [9,10], which in turn acts as co-factor for endothelial nitric oxide syntase (eNOS) to ensure the generation of NO [11]. Reduced BH4 levels lead to eNOS uncoupling, and generation of superoxide rather than NO [12], likely to form the strong oxidant peroxynitrite and decreasing NO bioavailability [9]. We have previously shown that vitC deficiency in guinea pigs leads to decreased BH4 plasma concentration in vivo [13], potentially weakening the vasodilator capacity.
Another important aspect of vitC is its antioxidant function, serving as a scavenger of reactive oxygen species (ROS) [14]. ROS play key roles in signal transduction related to both vasodilation and vasoconstiction [15] and can inhibit the two major endothelium-derived relaxing factors, NO and prostacyclin [15]. While eNOS uncoupling reduces NO bioavailability, peroxynitrite can inactivate prostacyclin synthase by tyrosin nitration of its active site [16,17]. Thus, as the primary vascular antioxidant, vitC protects the endothelium from oxidative stress [18].
A third mechanism of vitC-associated action could be on the cholinergic response of vascular smooth muscle cells (VSMCs). Increased oxidative stress has been found to reduce muscarinic receptor function in smooth muscle cells of the urinary bladder [19], and studies have shown an attenuated parasympathetic response [20] and muscarinic-cholinergic receptor density [21] in submandibular gland acinar cells in vitC deficient guinea pigs. As coronary arteries express muscarinic receptors in the endothelium and VSMCs, and an extensive network of cholinergic perivascular nerve fibres in the coronary artery tree is present in guinea pigs [22], the acetylcholine analogue carbachol was applied to study both vasodilator and vasoconstrictor responses.
In contrast to rats and mice, guinea pigs and humans share a requirement for dietary vitC. This makes the guinea pig an excellent in vivo model for studying effects of diet-imposed vitC deficiency. In this study, we examined a causal relationship between chronic vitC deficiency and plasma biopterin redox status, and putative consequences on the vasodilator and vasoconstrictor responses in isolated coronary arteries.

All experimental animal procedures were performed following protocols approved by the Danish Animal Experimental Inspectorate under the Ministry of Environment and Food of Denmark (No. 2012-15-2934-00205). Group sizes were determined by power analysis of sample size, applying a power of 80% and a 5% significance level. A difference of 30% was considered biologically relevant and variations of the chosen end-points were based on our previous experience with the model [23,24]. Animals were selected by randomization from a larger, extensive, study of diet imposed vitC deficiency in guinea pigs intended to investigate vitC transport to the brain (unpublished results). Thus, the current data-set depicts findings from a randomly defined subset of animals, representing high vitC intake (control) and low (deficient), thereby, reflecting the extremes of the imposed interventions of the main study.
Seven-day old, Dunkin Hartley female guinea pigs (Envigo, Horst, The Netherlands) were equipped with subcutaneous microchip implant for identification (Uno Pico Transponder, Zevenaar, The Netherlands) upon arrival to the facility. Animals were randomized into weight stratified groups and subjected to either high (n = 16; 1500 mg vitC/kg feed; Controls) or low vitC (n = 16, 0 mg vitC/kg feed for 3 weeks, followed by 50 mg vitC/kg feed until study termination; Deficient). All diets were chow based standard guinea pig diets for growing animals (Ssniff Spezialdiäten, Soesst, Germany), differing only in vitC levels as confirmed by post production analysis. Animals were group-housed in identical floor pens and allowed free access to feed, dried hay (devoid of vitC by analysis) and drinking water. Body-weight was monitored throughout the study period, and though vitC deficient animals experienced a brief period (1–3 days) of weight stagnation immediately prior to changing from 0 mg to 50 mg vitC/kg feed, clinical signs of vitC deficiency were absent and body weight was comparable between groups at the time of euthanasia, 10–12 weeks after study start.

Immediately following euthanasia, the heart was isolated and placed into cold physiological buffer (in mM: 117.8 NaCl, 4.0 KCl, 2.0 CaCl2, 0.9 MgCl2, 1.25 NaH2PO4, 20 NaHCO3, and 5.0 glucose). The left anterior descending (LAD) coronary artery was dissected from surrounding myocardial tissue, cut into 2 mm segments and directly mounted in a wire myograph (Danish Myo Technology, Aarhus, Denmark). The anatomical localization of the LAD coronary artery is illustrated in Supplemental Figure S1. Wire myography experiments were initiated by normalisation to an internal circumference corresponding to 0.9 of the circumference at 13.3 kPa. Following a 15 min equilibration period in physiological buffer the artery segments were contracted 2–3 times using 60 mM potassium (similar composition as the above physiological buffer, except that NaCl was exchanged with KCl on equimolar basis) to measure the vasoconstrictor reactivity of the arteries. Only segments with potassium induced contraction >0.5 mN/mm were included in the study. After washing to obtain baseline relaxation, the ETB receptor agonist, Sarafotoxin 6c (S6c) was added in a cumulative fashion (10−12 to 10−7 M). Carbachol induced vasodilation and vasoconstriction (10−12 to 3 × 10−4 M) was tested following pre-constriction with potassium (40 mM). In order to elucidate the carbachol vasomotor responses, carbachol concentration-response curves were acquired either in absence (controls) or in presence of the muscarinic receptor antagonist, atropine (10−5 M), the COX-inhibitor indomethacin (10−4 M) or the eNOS inhibitor L-NAME (10−5 M). Endothelium-independent vasodilation was tested by sodium nitroprusside (10−9 to 10−5 M) following pre-constriction with 40 mM potassium. U46619 (10−12 to 10−5 M) and endothelin-1 (ET-1)-induced (10−12 to 10−7 M) vasoconstriction were tested using cumulative additions.

EDTA-stabilized blood samples were centrifuged (16,000× g, 1 min, 4 °C). Plasma for ascorbate and dehydroascorbic acid (DHA) analysis was stabilized with meta-phosphoric acid prior to storage at −80 °C. Previous studies have shown that both ascorbate and DHA are stable under these conditions for at least five years [23]. Concentrations were measured by HPLC with colorimetric detection as previously described [25,26]. The remaining plasma aliquots were stored neat at −80 °C until further analysis, except for samples for BH2 and BH4 determination, where the blood was stabilized in 0.1% dithioerythritol prior to centrifugation (2000× g, 4 min, 4 °C), yielding a plasma fraction, which was analyzed by HPLC, as previously described [13].

Force data (mN) were transformed to tension (Nm−1) by dividing by twice the artery segment length and subtracting the baseline tension values [24]. Active tension was calculated by subtracting the passive tension from the potassium-induced active tension. Agonist-induced tension was normalized to the potassium induced active tension. Carachol-induced relaxation was calculated by subtracting the active tensions from the potassium-induced (40 mM) active tension. All statistical analysis and graphs were performed in GraphPad Prism 7.00 (GraphPad Software, La Jolla, CA, USA). Differences between two groups were evaluated by a two-sided Student’s t-test. For multiple comparisons (in functional myography data), two-way ANOVA repeated-measures with Sidak’s multiple comparisons was applied. Correlations between specific outcomes were evaluated by Pearson correlation (r) coefficient with two-tailed p-values.

The potency and efficacy of ET-1 was significantly higher than that of U46619 (p < 0.05), and the selective ETB receptor agonist, S6c, induced only a negligible contraction in the coronary artery segments (Table 2). VitC status did not have a significant effect on the potassium, ET-1, U46619 or S6c vasoconstrictor responses (Figure 2a,b). In contrast to the other vasoconstrictors, potassium induced a long-lasting vasocontractile response persisting for at least 10 min and potassium was therefore used as a pre-constrictor in the studies of the relaxation-inducing agonists. Coronary arteries from vitC deficient guinea pigs were significantly smaller than the controls (p < 0.05, Table 2). Additionally, we found that for the vitC deficient group, the animal weight was positively correlated with the coronary artery diameter (p < 0.002, Table 3 and Figure 3a).

The present study shows that chronic vitC deficiency impairs vasomotor function of coronary arteries. During vitC deficiency, the endothelial function is reduced, with decreasing vessel diameter and carbachol-induced vasoconstrictor responses being significantly impaired. The carbachol-induced effects are apparently mediated by altered muscarinic receptor activity. Although further studies are required to evaluate the underlying mechanisms and the potential clinical implications, these findings may provide a link between chronic vitC deficiency and increased risk of cardiovascular disease reported in numerous epidemiological studies.

We thank Joan Elisabeth Frandsen for her excellent technical expertise and assistance in the ascorbate measurements. This study was supported by the LIFEPHARM Centre for In Vivo Pharmacology. 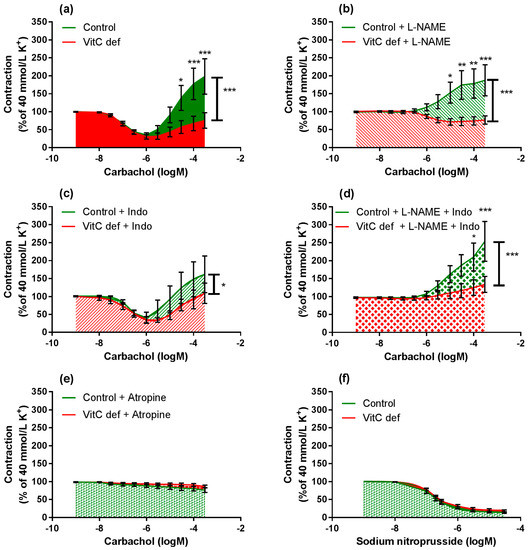 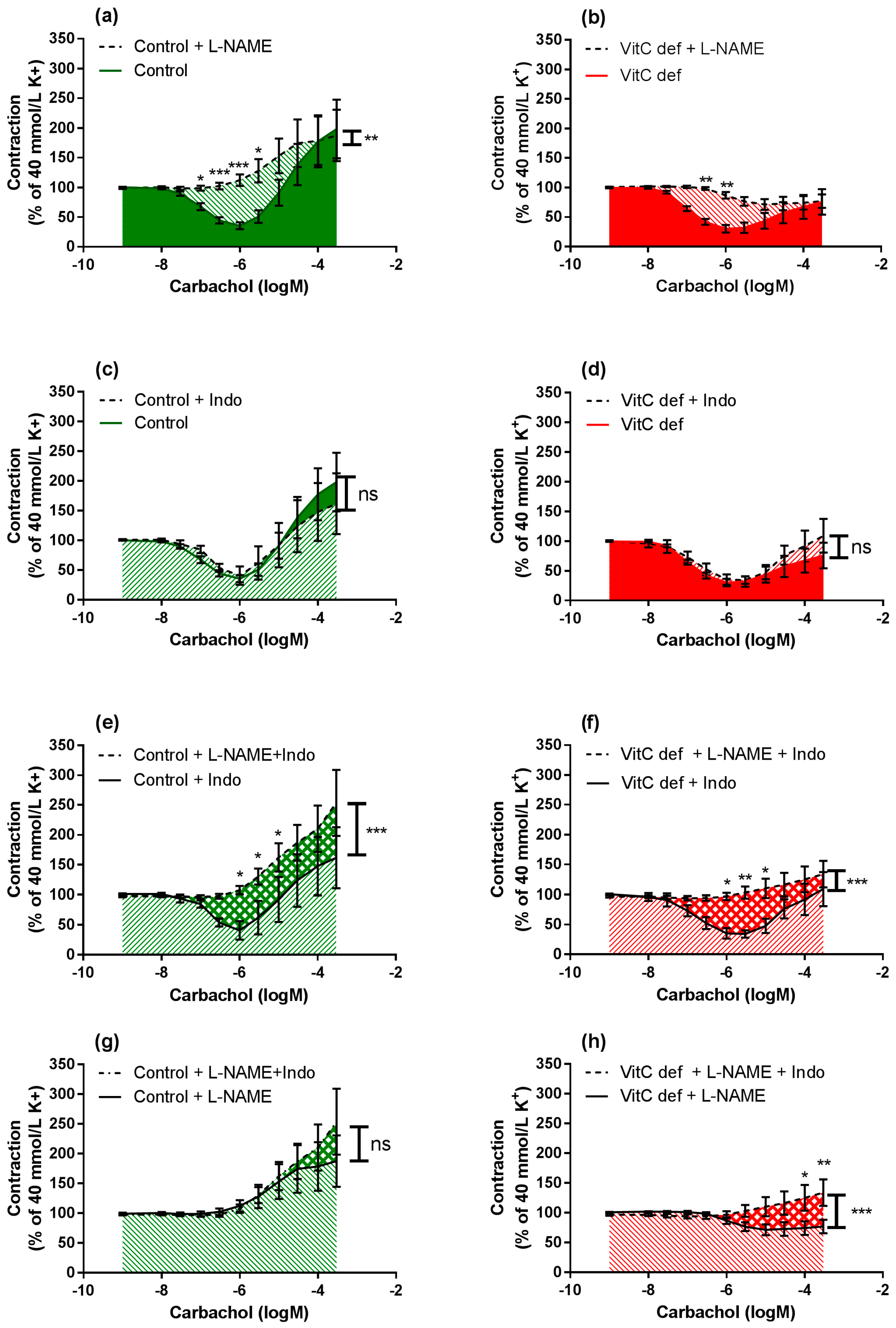