Knowledge, Attitude, and Practice (KAP) of Dairy Products in Chinese Urban Population and the Effects on Dairy Intake Quality
Next Article in Special Issue

Accumulating evidence in mice models of accelerated senescence indicates a rescuing role of ascorbic acid in premature aging. Supplementation of ascorbic acid appeared to halt cell growth, oxidative stress, telomere attrition, disorganization of chromatin, and excessive secretion of inflammatory factors, and extend lifespan. Interestingly, ascorbic acid (AA) was also found to positively modulate inflamm-aging and immunosenescence, two hallmarks of biological aging. Moreover, ascorbic acid has been shown to epigenetically regulate genome integrity and stability, indicating a key role of targeted nutrition in healthy aging. Growing in vivo evidence supports the role of ascorbic acid in ameliorating factors linked to Alzheimer’s disease (AD) pathogenesis, although evidence in humans yielded equivocal results. The neuroprotective role of ascorbic acid not only relies on the general free radical trapping, but also on the suppression of pro-inflammatory genes, mitigating neuroinflammation, on the chelation of iron, copper, and zinc, and on the suppression of amyloid-beta peptide (Aβ) fibrillogenesis. Epidemiological evidence linking diet, one of the most important modifiable lifestyle factors, and risk of Alzheimer's disease is rapidly increasing. Thus, dietary interventions, as a way to epigenetically modulate the human genome, may play a role in the prevention of AD. The present review is aimed at providing an up to date overview of the main biological mechanisms that are associated with ascorbic acid supplementation/bioavailability in the process of aging and Alzheimer’s disease. In addition, we will address new fields of research and future directions. View Full-Text
Keywords: ascorbic acid; aging process; Alzheimer’s disease ascorbic acid; aging process; Alzheimer’s disease
►▼ Show Figures 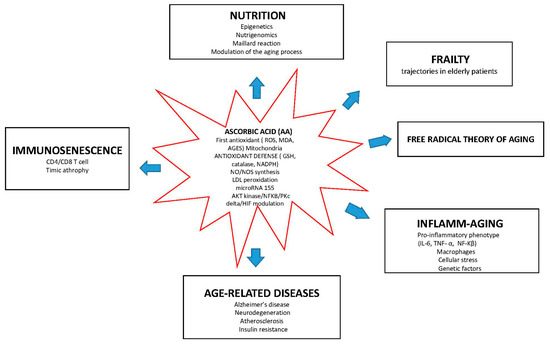