The Association between the Mediterranean Dietary Pattern and Cognitive Health: A Systematic Review

With ageing, there is a greater risk of dehydration. This study investigated the diuretic effect of alcoholic beverages varying in alcohol concentration in elderly men. Three alcoholic beverages (beer (AB), wine (AW), and spirits (S)) and their non-alcoholic counterparts (non-alcoholic beer (NAB), non-alcoholic wine (NAW), and water (W)) were tested in a diet-controlled randomized crossover trial. For the alcoholic beverages, alcohol intake equaled a moderate amount of 30 g. An equal volume of beverage was given for the non-alcoholic counterpart. After consumption, the urine output was collected every hour for 4 h and the total 24 h urine output was measured. AW and S resulted in a higher cumulative urine output compared to NAW and W during the first 4 h (effect size: 0.25 mL p < 0.003, effect size: 0.18 mL, p < 0.001, respectively), but not after the 24h urine collection (p > 0.40, p > 0.10). AB and NAB did not differ at any time point (effect size: −0.02 mL p > 0.70). For urine osmolality, and the sodium and potassium concentration, the findings were in line. In conclusion, only moderate amounts of stronger alcoholic beverages, such as wine and spirits, resulted in a short and small diuretic effect in elderly men. View Full-Text
Keywords: hydration; dehydration; moderate alcohol consumption; beer; wine; spirits hydration; dehydration; moderate alcohol consumption; beer; wine; spirits
►▼ Show Figures 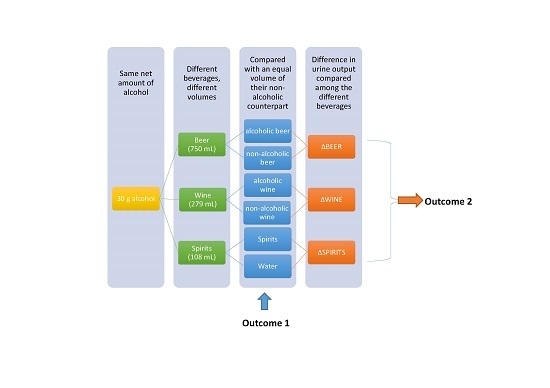