Carbohydrates from Sources with a Higher Glycemic Index during Adolescence: Is Evening Rather than Morning Intake Relevant for Risk Markers of Type 2 Diabetes in Young Adulthood?
Previous Article in Journal

Influence of Hot and Cold Environments on the Regulation of Energy Balance Following a Single Exercise Session: A Mini-Review

Understanding the regulation of human food intake in response to an acute exercise session is of importance for interventions with athletes and soldiers, as well as overweight individuals. However, the influence of hot and cold environments on this crucial function for the regulation of body mass and motor performance has not been summarized. The purpose of this review was to exhaustively search the literature on the effect of ambient temperature during an exercise session on the subsequent subjective feeling of appetite, energy intake (EI) and its regulation. In the absence of stress due to environmental temperature, exercise-induced energy expenditure is not compensated by EI during an ad libitum meal following the session, probably due to decreased acylated ghrelin and increased peptide tyrosine tyrosine (PYY), glucagon-like peptide 1 (GLP-1), and pancreatic polypeptide (PP) levels. No systematic analysis has been yet made for major alterations of relative EI in cold and hot environments. However, observed eating behaviors are altered (proportion of solid/liquid food, carbohydrate/fat) and physiological regulation appears also to be altered. Anorexigenic signals, particularly PYY, appear to further increase in hot environments than in those that are thermoneutral. Ghrelin and leptin may be involved in the observed increase in EI after exercise in the cold, in parallel with increased energy expenditure. The potential influence of ambient thermal environment on eating behaviors after an exercise session should not be neglected. View Full-Text
Keywords: physical exercise; appetite; energy intake; eating behavior; extreme environment; gut hormones physical exercise; appetite; energy intake; eating behavior; extreme environment; gut hormones
►▼ Show Figures 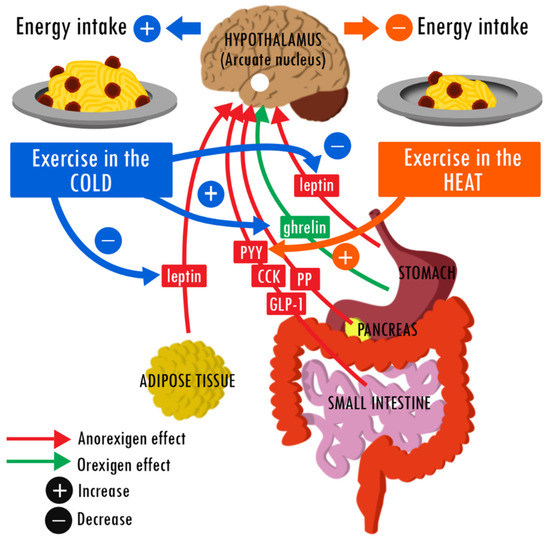