Associations between Folate and Vitamin B12 Levels and Inflammatory Bowel Disease: A Meta-Analysis
Previous Article in Journal

There have been a limited number of studies examining the association between pre-pregnancy body mass index (BMI) and dietary inflammation during pregnancy. Our aim is to examine the association between pre-pregnancy BMI and the Dietary Inflammatory Index (DII)™ and C-reactive protein (CRP) concentrations during pregnancy. The study included 631 pregnant American women from the National Health and Nutrition Examination Survey (NHANES) cross-sectional examinations from 2003 to 2012. Pre-pregnancy BMI was calculated based on self-reported pre-pregnancy weight and measured height. The cut-offs of <18.5 (underweight), 18.5–24.9 (normal), 25.0–29.9 (overweight), and ≥30 kg/m2 (obese) were used to categorize the weight status of pregnant women prior to pregnancy. The DII, a literature-based dietary index to assess the inflammatory properties of diet, was estimated based on a one-day 24-h recall. Multivariable linear and logistic regressions were performed to estimate beta coefficients and the adjusted odds ratios (AORs) and 95% confidence intervals (95% CIs) on the association of pre-pregnancy BMI categories with the DII and CRP concentrations during pregnancy. After controlling for variables including: race/ethnicity, family poverty income ratio, education, marital status, month in pregnancy, and smoking status during pregnancy; women who were obese before pregnancy (n = 136) had increased odds for being in the highest tertile of the DII and CRP concentrations compared to women with normal weight (AORs 2.40, 95% CIs 1.01–5.71; AORs 24.84, 95% CIs 6.19–99.67, respectively). These findings suggest that women with pre-pregnancy obesity had greater odds of reporting higher DII and having elevated CRP. In conclusion, high pre-pregnancy BMI was associated with increased odds of pro-inflammatory diet and elevated CRP levels during pregnancy in the USA. View Full-Text
Keywords: dietary inflammatory index; C-reactive protein; pregnancy body mass index; NHANES; reproductive health dietary inflammatory index; C-reactive protein; pregnancy body mass index; NHANES; reproductive health
►▼ Show Figures 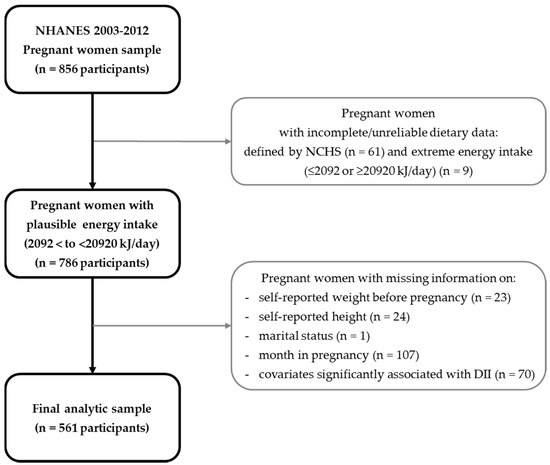