Article
Time Trends and Patterns of Reported Egg Consumption in the U.S. by Sociodemographic Characteristics
by

:
Eggs have the potential to contribute essential nutrients to nutritionally vulnerable populations on limited food budgets. Further research is needed to better understand patterns of egg consumption across diverse sociodemographic groups in order to inform clinical practice to improve nutrient adequacy. Data on demographics and egg intake of 29,694 U.S. adults were obtained from the National Health and Nutrition Examination Survey, 2001–2012. The National Cancer Institute’s usual intake methodology was used to estimate the distribution of egg intake. Linear and logistic regression models were used to test for time trends in egg consumption and for differences between sociodemographic groups. The proportion of the U.S. population, overall (21%–22%; p = 0.311) and by sociodemographic group (p > 0.05 for all groups), that reported consuming eggs remained unchanged from 2001 to 2012. Mean egg consumption increased overall from 23.0 (95% CI, 20.8–25.2) g/day in 2001–2002 to 25.5 (22.7–28.4) g/day in 2011–2012 (p = 0.012), but not among food insecure individuals (p = 0.816) and Supplemental Nutrition Assistance Program (SNAP) participants (p = 0.399). No differences in the odds of egg consumption were observed by income level, food security status, or SNAP participation status (p > 0.05 for all groups). Given the nutritional benefits of eggs, as well as their low cost and culinary versatility, the results presented here have important implications for reducing disparities in health outcomes and diet quality, in particular among food insecure individuals and SNAP participants. Further research is needed to examine factors that influence egg consumption and associated nutrient intake, and to identify potential barriers to increasing egg consumption, such as egg price changes, across diverse sociodemographic groups.
Keywords:
eggs; trends; sociodemographic characteristics; dietary intake

Eggs are low-cost and rich in many important nutrients, including all essential amino acids [1,2], choline, B vitamins, vitamin A, iron, vitamin D [3], and the xanthophyll carotenoids lutein and zeaxanthin [4,5,6]. Evidence also shows that consuming eggs increases the bioavailability of co-consumed carotenoids [7] and vitamin E [8], and also contributes to satiety, an important factor for weight control [9].
The most recently available data (2001–2008) on the prevalence of egg consumption show that approximately 20% of the U.S. population reported consuming eggs on a given day [10], which is unchanged from earlier (1988–1994) estimates [11]. On a weight basis, Rehm et al. reported a positive trend in egg consumption from 1999–2000 to 2011–2012, albeit of small magnitude [12].
In the U.S., food and nutrient intakes vary by sociodemographic characteristics such as age, income, education level, and race-ethnicity [13,14]. For instance, Mexican–American and non-Hispanic black children are most likely to have serum vitamin D concentrations levels below the at-risk cutoff [13]. Individuals from low-income and food insecure households, even those participating in federal food assistance programs, have lower quality diets compared to the general population [15].
Data from 2003 to 2006 show that eggs contribute important nutrients to minority race-ethnic groups [16,17] and overweight and obese women [17]. Others demonstrated that egg consumption by Supplemental Nutrition Assistance Program (SNAP) participants did not differ from income-eligible non-SNAP participants [18].
Given that eggs are nutritious, low cost, and a part of a wide range of cultural food menus, they have the potential to contribute valuable nutrients to diverse populations including nutritionally vulnerable groups with limited food budgets. Despite recent analyses of population-level trends in egg consumption, further research is needed to better understand patterns of egg consumption across diverse sociodemographic groups, including nutritionally vulnerable groups, in order to inform clinical practice to improve nutrient adequacy. The goal of this research was to (1) describe time trends in frequency and amount of egg consumption; and (2) describe differences in egg consumption by sex, age, income, education, race-ethnicity, SNAP participation status, and food security status. We expected to observe a moderate increase in overall egg consumption over time and heterogeneous trends across sociodemographic groups.

Data were derived from the National Health and Nutrition Examination Survey (NHANES) and its dietary survey component, the What We Eat In America (WWEIA) survey. NHANES uses a complex, multistage sampling design and is representative of the civilian non-institutionalized U.S. population. Sociodemographic groups of public health interest are oversampled. Data are collected continuously and released in two-year cycles. The NHANES survey includes a detailed medical evaluation, demographic and health and behavior questionnaires, physical activity assessment, and dietary recalls collected by WWEIA. Details may be found elsewhere [19]. The present analyses used data from adults aged 20+ in the 2001–2002, 2003–2004, 2005–2006, 2007–2008, 2009–2010, and 2011–2012 data releases. NHANES protocols were approved by the National Center for Health Statistics Ethics Review Board and all participants provided written consent.

In 2001–2002 a single day’s 24-h dietary recall was collected. WWEIA 2003–2012 consists of two non-consecutive, interviewer-administered 24-h dietary recalls using the U.S. Department of Agriculture (USDA) Automated Multiple-Pass Method [20]. The first interview is administered in-person and the second by telephone 3–10 days later. Only the data collected from the first 24-h recall was used to estimate intake; data from the second 24-h recall was used to estimate the within-person variation in intake [21]. In 2003–2004 and 2005–2006, a food propensity questionnaire was administered [22]. One of the questions asked was “Over the past 12 months… How often did you eat eggs, egg whites, or egg substitutes (NOT counting eggs in baked goods and desserts)? (Please include eggs in salads, quiche, and souffles)”. Nearly all (94%) individuals reported eating eggs at some point in the previous year, so per capita estimates are presented. The USDA Food and Nutrient Database for Dietary Studies (FNDDS) [23] was used to identify eggs and egg mixtures that were composed primarily of eggs (i.e., primarily classified as either “eggs” or “egg mixtures” by FNDDS staff using standardized procedures; specific FNDDS food codes included in this analysis are listed below), such as cheese omelets and egg salad sandwiches. Dishes made with egg whites were included, and egg substitutes were excluded because of their distinct nutrient profile and extremely small consumption frequency and amount (less than 0.5% of the sample reported consuming egg substitutes on the survey day, with a mean per capita intake of <0.5 grams/day). FNDDS food codes included in this analysis were 31101010–31111020 and 32101500–32401000, and these represented 178 discrete food items reported consumed in WWEIA 2001–2012.

Household income was categorized using the ratio of family income to the federal poverty threshold, known as the income-to-poverty ratio (IPR) [24]. Income categories were IPR 0–1.30, 1.31–1.85, and >1.85, with the lowest category representing individuals who live in households that satisfy the income requirement for participating in the Supplemental Nutrition Assistance Program (SNAP), a federal food assistance program [25]. Education was categorized as <high school diploma, high school diploma or equivalent, or some post-secondary education. SNAP participation was defined as an individual currently receiving benefits. Individuals with a IPR ≤ 1.3 but reporting that they were not authorized to receive food stamps or had not received food assistance during the last 31 days were categorized as “income-eligible non-participants”. Food security status was assessed in all waves using the 10-item U.S. Adult Food Security Survey Module [26] and categorized into fully food secure, marginally food secure, or low food security status.
NHANES is designed to oversample some sociodemographic groups in order to increase reliability and precision. Mexican-Americans were oversampled from 2001 to 2006, and this group was expanded to include all Hispanic persons beginning in 2007–2008 [27]. The National Center for Health Statistics provides guidance for researchers when analyzing multiple NHANES waves, and recommends that, when waves 2005–2006 and 2007–2008 are analyzed in the same study, the Mexican-American category be used instead of the Hispanics category due to the different sampling method for Hispanic persons between these waves [27]. Further changes to the NHANES sampling design were implemented in 2011–2012 that included oversampling Asians [28]. Therefore, in accordance with recommended analytical procedures, when reporting consumption by race-ethnicity we removed from analysis all individuals (n = 3909) who reported any category other than non-Hispanic black, Mexican–American, or non-Hispanic white. The final sample size used in this analysis was n = 29,694.

The percentage of individuals who reported eating eggs and per capita consumption amounts were age-adjusted using the method and weights provided by Klein and Schoenborn [29]. The USDA standardizes the weight of eggs from disparate food sources (e.g., quiche, scrambled eggs, whole eggs) as one ounce-equivalent equals one egg which equals approximately 50 grams of eggs [30]; in order to provide relevance to an international audience we report consumption amounts in grams. Linear regression models with weights equal to the standard error of each estimate were used to test for linear trends across survey cycles for each sociodemographic group. Logistic regression was used to test whether the odds of consuming eggs differed between the levels of age, sex, race-ethnicity, income, education, food assistance participation, and food security. Age, sex, race-ethnicity, and survey year were included as covariates in all models.
The distribution of egg intake for each sociodemographic group was estimated using the National Cancer Institute’s (NCI) usual intake methodology [31]. The NCI method uses information from two 24-h recalls to estimate the within-individual variability in intake and requires two Statistical Analysis System (SAS) macros: MIXTRAN and DISTRIB. Because eggs are not usually consumed daily, MIXTRAN was used to fit a two-part model, in which the probability of consuming eggs was allowed to be correlated with the amount consumed [31]. Covariates were age, sex, race-ethnicity, survey cycle, and whether the intake day was a weekday (Monday–Thursday) or weekend (Friday–Sunday). Standard errors were estimated using the balanced repeated replication method.
All statistical analyses were completed using SAS V9.4 (SAS Institute, Inc., Cary, NC, USA), and day 1 sample weights were used to account for differential probabilities of selection, nonresponse, and noncoverage.

3.1.1. Trends in the Percentage of Individuals Reporting Consuming Eggs on a Given Day

3.1.2. Trends in the Amount of Eggs Consumed Per Day

The proportion of U.S. adults that reported consuming eggs on any given day remained unchanged from 2001–2002 to 2011–2012. However, mean egg consumption increased over this twelve year period, overall and among select sociodemographic groups, but not among nutritionally vulnerable food insecure individuals and SNAP participants. Given the nutritional benefits of eggs, as well as their low cost and culinary versatility, the results presented here have important implications for reducing disparities in health outcomes and diet quality, in particular among food insecure individuals and SNAP participants. Further research is needed to examine factors that influence egg consumption and associated nutrient intake. Additionally, more information is needed to identify barriers of egg consumption, and targeted and sustained marketing efforts are needed to overcome these barriers.

L.J. and J.N.R. conceived and designed the analyses and secured grant funding for this work; L.K.J. and W.Y.J. performed the analyses; Z.C. and L.J. analyzed and interpreted the data; Z.C. and L.J. wrote the paper; all authors read, revised, and approved the final manuscript. 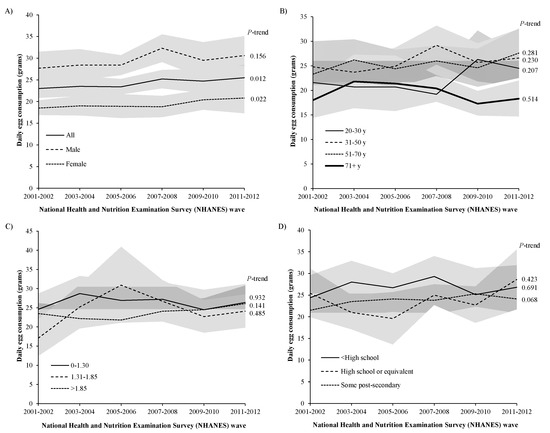