Beyond the Cholesterol-Lowering Effect of Soy Protein: A Review of the Effects of Dietary Soy and Its Constituents on Risk Factors for Cardiovascular Disease
Next Article in Special Issue

Over the last few decades, the daily intake of fructose, either free or as high-fructose corn syrup, has markedly increased [1]. These forms of fructose are used in the food industry for their enhanced sweetness, palatability, solubility, lower cost, and high production efficiency compared to sugar [2]. However, the increase in fructose consumption has coincided with a rise in the incidence of obesity, metabolic syndrome, and type 2 diabetes [3,4]. Several researchers have even suggested that increased fructose consumption has directly contributed to the obesity and type 2 diabetes epidemic [3,4].
Previous studies have shown that fructose-rich diets can induce many features of metabolic syndrome, including hypertension, insulin resistance, abdominal obesity, hepatic steatosis, endothelial dysfunction, and inflammation [5,6,7,8,9,10]. Fructose is a highly lipogenic substrate which can induce profound metabolic alterations in the liver [11], where 90% of ingested sugar is metabolized [12]. Although the mechanisms underlying fructose-mediated metabolic disease are not entirely understood, previous studies have suggested a causative role for oxidative stress [13,14,15,16], an imbalance between reactive oxygen species (ROS) generation and removal by antioxidant defense systems. Mitochondria produce ROS through the respiratory chain, but are also equipped with antioxidant enzymes, thereby participating in redox regulation. Since oxidative stress is considered a key factor in the development of metabolic alterations [17,18], the marked effect of fructose on systemic oxidative stress could explain its role in the pathophysiology of insulin resistance and metabolic syndrome [19,20,21]. In agreement with this, in rats fed a high-fructose diet, we have previously found hepatic insulin resistance together with hepatic mitochondrial oxidative damage, both in the lipid and in the protein component, as well as decreased activity of antioxidant defense [11]. In addition, Mamikutty et al. [22] found that after eight weeks of high fructose consumption, rats developed several features of metabolic syndrome, together with mitochondrial structural alterations. Therefore, it seems that there is a strong association between the effect of fructose at the cellular level and the mitochondrial compartment. However, information on the possible mechanism by which mitochondrial function is altered by fructose feeding is lacking. Mitochondria contain a double-stranded, circular DNA that encodes many proteins essential for ATP production. Malfunction of the antioxidant defense system leads to oxidative attack, resulting in mtDNA damage, which in turn can lead to a decline in mitochondrial functions and turnover, and in an impairment of appropriate stress responses that monitor and maintain their quality. Taking into account the above considerations, we believe that it becomes relevant to investigate the consequences that a fructose-rich diet may have on oxidative stress and on mtDNA damage in a metabolically very important organ such as the liver.
Therefore, the purpose of this study was to evaluate in the liver of fructose-fed rats: (i) a possible induction of mtDNA damage; (ii) changes in the expression of a specific enzyme associated with the mtDNA repair mechanism; and (iii) a possible involvement of mechanisms underlying mitochondrial biogenesis and the cellular antioxidant defense system.

Male Sprague-Dawley rats (Charles River, Calco (LC), Italy) of about 100 days of age were caged singly in a temperature-controlled room (23 ± 1 °C) with a 12 h light/dark cycle (6:30 a.m.–6:30 p.m.). Animal treatment, housing, and euthanasia met the guidelines set by the Italian Health Ministry. All experimental procedures were also approved by “Comitato Etico-Scientifico per la Sperimentazione Animale” of the University “Federico II” of Naples, Italy.
Rats were divided in two groups, each with the same mean body weight (470 ± 10 g), and either fed a control or a fructose-rich diet (composition of the two diets is shown in Table 1), known to induce early signs of obesity within eight weeks of treatment [7,8,11]. Briefly, rats were pair-fed for eight weeks, by giving them the same amount of diet, both as weight and as caloric content and each rat consumed the full portion of the diet. During the treatment, body weight, food, and water intake were monitored daily. At the end of the experimental period, the rats were euthanized by decapitation, and blood and liver samples were collected.

QPCR was performed on liver DNA extracts as previously described [24] with the following modification: the PCR amplification was done using the Ranger DNA Polymerase with the appropriate premixes (Bioline Ltd., London, UK). Two pairs of PCR primers were employed:
For amplification of the mtDNA long fragment, the standard thermocycler program included initial denaturation at 94 °C for 1 min, 18 cycles of 94 °C for 15 s, 65 °C for 12 min, and final extension at 72 °C for 10 min. To amplify the short mtDNA fragment (235 bp), the same program was used except the extension temperature was changed to 60 °C. DNA damage was quantified by comparing the relative efficiency of amplification of the long mtDNA fragment normalized to the amplification of the small mtDNA fragment. QPCR products were quantified using PicoGreen dye and a fluorescence plate reader in the same manner as the template DNA. The resulting values were converted to relative lesion frequencies per 10 Kbp DNA by applying the Poisson distribution.

Relative mtDNA copy numbers were measured liver genomic DNA by real-time quantitative PCR (qRT-PCR) and corrected by simultaneous measurement of nuclear DNA. We examined the amplification of mitochondrial cytochrome c oxidase subunit II (COII, mitochondrial-encoded gene) and β-actin (nuclear-encoded gene). The primer sequences used were as follows:
The threshold cycle (Ct) reflects the cycle number at which a fluorescence signal within a reaction crosses a threshold. In our study, the average Ct values of nuclear DNA and mtDNA were obtained for each case. mtDNA content was calculated using ΔCt = average Ctnuclear DNA − average CtmtDNA and then was obtained using the formula mtDNA content = 2 (2ΔCt).

Rat liver was gently homogenized in 10 volumes of isolation medium consisting of 220 mmol mannitol, 70 mmol sucrose, 20 mmol Tris-HCl, and 1 mmol EDTA at pH 7.4 (Sigma-Aldrich, St. Louis, MO, USA). Aliquots of homogenate were withdrawn for further measurements while the remaining homogenate was centrifuged at 500× g for 10 min at 4 °C and the resulting supernatant was centrifuged at 3000× g 10 min at 4 °C. The mitochondrial pellet was then washed twice and solubilized in a minimal volume of RIPA buffer (50 mmol Tris-HCl (pH = 7.4), 150 mmol NaCl, 1% NP-40, 0.1% SDS, 2 mmol EDTA, 0.5% sodium deoxycholate) until addition of protease/phosphatase inhibitors and kept on ice. The mitochondrial protein concentration was determined using the Bio-Rad DC method and the mitochondrial samples were then used for Western blot analysis of catalase content.

Lipid peroxidation was determined according to Fernandes et al. [25] in liver homogenates prepared as described above, by measuring thiobarbituric acid reactive substances (TBARS), using the thiobarbituric acid assay. Aliquots of hepatic homogenates were added to 0.5 mL of ice-cold 40% trichloroacetic acid. Then, 2 mL of 0.67% of aqueous thiobarbituric acid containing 0.01% of 2,6-di-tert-butyl-p-cresol was added. The mixtures were heated at 90 °C for 15 min, then cooled in ice for 10 min, and centrifuged at 850× g for 10 min. The supernatant fractions were collected and lipid peroxidation was estimated spectrophotometrically at 530 nm. The amount of TBARS formed was calculated using a molar extinction coefficient of 1.56 × 105 mol−1·cm−1 and expressed as nmol TBARS·g−1 tissue.

MPO activity was assessed in liver samples as reported by Kim et al. [26]. Briefly, tissue samples (100 mg) were homogenized in 1 mL of hexadecyltrimethylammoniumbromide (HTAB) buffer (0.5% HTAB in 50 mmol phosphate buffer, pH 6.0) and centrifuged at 13,400× g for 6 min at 4 °C. Then, 10 μL of supernatant were combined with 200 μL of 50 mmol phosphate buffer, pH 6.0, containing 0.167 mg·mL−1 0-dianisidine hydrochloride and 1.25% hydrogen peroxide. The change in absorbance at 450 nm was measured and one unit of MPO activity was defined as that degrading 1 μmol of peroxide per minute at 25 °C.

As shown in Table 2, in fructose-fed rats, plasma levels of ALT and AST, biochemical indicators of hepatic damage, and hepatic levels of TBARS, markers of lipid peroxidation, were significantly higher compared to the controls. In addition, fructose-fed rats exhibited a significant increase in hepatic MPO activity compared to the controls. The determination of MPO activity can be used as a surrogate marker of inflammation, since it has been shown that the activity of MPO solubilized from the inflamed tissue is directly proportional to the number of neutrophils seen in histologic sections [27].

As shown in Figure 1, administration of a fructose-rich diet for eight weeks resulted in significantly increased levels of plasma 8-OHdG (+56%) compared to control rats. The reaction of intracellular ROS with DNA results in numerous forms of base damage, and 8-OHdG is one of the most abundant and most studied lesions generated. So, 8-OHdG has been used as an indicator of oxidative DNA damage in vivo and in vitro [23,28]. The above result of increased levels of plasma 8-OHdG in rats fed a fructose-rich diet suggests that such treatment induces an increase in DNA damage.

As shown in Figure 2, catalase protein levels in rat liver mitochondria were decreased by 35% in rats fed a fructose-rich diet compared to controls.

3.4. Effect of Fructose-Rich Diet on mtDNA Damage and Copy Number

POLG is an important enzyme involved in mtDNA repair and replication. To investigate whether a fructose-rich diet caused changes in the POLG expression, qRT-PCR and Western blot analysis were performed. In rats fed a fructose-rich diet, the POLG mRNA expression (Figure 5a) and protein levels (Figure 5b) were found to be significantly decreased by 42% and 27%, respectively, compared to control rats.

Hepatic mitochondrial biogenesis was evaluated by measuring the mRNA and protein levels of PGC1α, NRF1, and TFAM. PGC1α is one of the most important coactivators of mitochondrial biogenesis, which controls many aspect of oxidative metabolism, through co-activation and enhancement of the expression and activity of several transcription factors, including NRF1 [29,30]. PGC-1alpha is also indirectly involved in regulating the expression of mtDNA transcription via the increased expression of TFAM, which is coactivated by NRF1 [29,31].
In rats fed fructose-rich diets, Pgc1α, Nrf1, and Tfam (Figure 6a) mRNA expression was significantly reduced by 19%, 41% and 43%, respectively, compared to control rats. Regarding the protein levels (Figure 6b), the reductions were 27%, 29% and 27%, respectively. 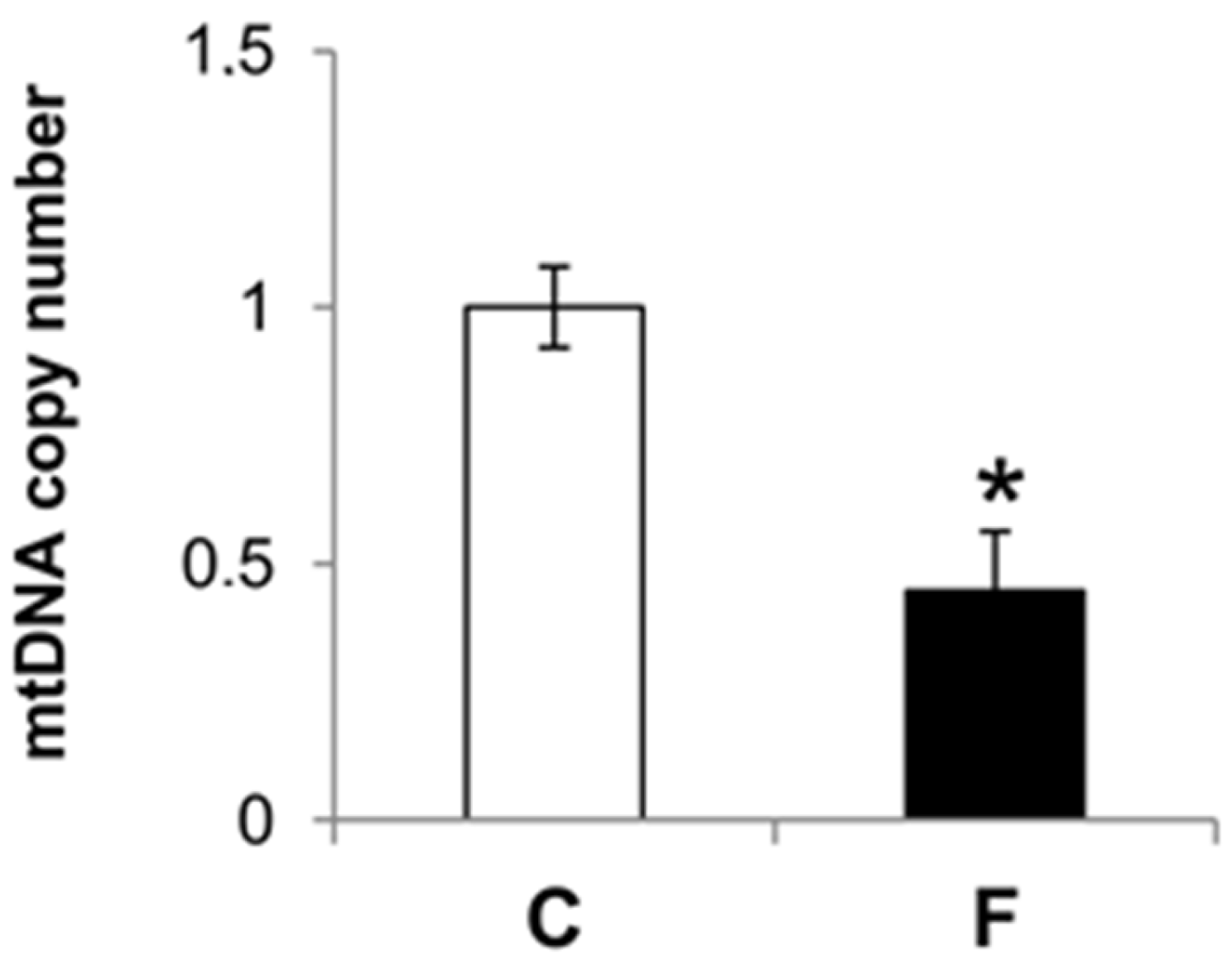 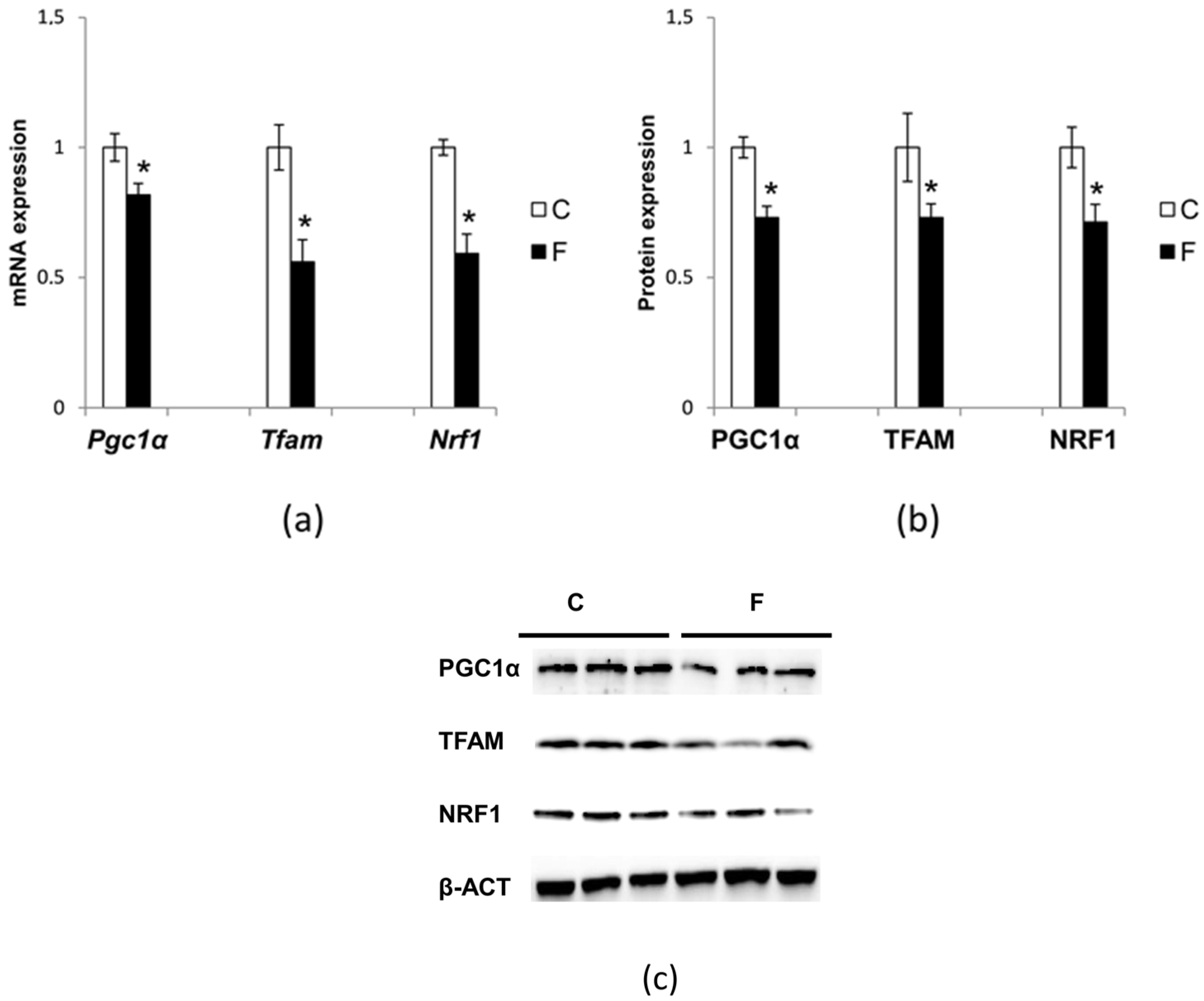