While nitrate and nitrite were previously considered inert byproducts of the nitric oxide (NO) metabolism, recent insights suggest that (dietary) nitrate can also serve as a precursor for NO through the nitrate -> nitrite -> NO-pathway [1]. Different studies have shown that both plasma nitrate and nitrite concentrations increase following dietary nitrate supplementation in a dose-dependent manner [2,3]. These elevations in plasma concentrations have in turn been associated with improvements in exercise performance, suggesting ergogenic benefits from activation of the nitrate to NO pathway [4,5,6].
Multiple studies from different laboratories have shown that dietary nitrate ingestion can decrease the oxygen cost of submaximal exercise and increase high-intensity exercise tolerance in recreational athletes [4,7,8]. Furthermore, we have previously shown that nitrate-rich beetroot juice ingestion can not only increase oxygen efficiency during submaximal cycling exercise, but that it can also improve time trial performance in moderately trained cyclists and triathletes [5]. As such, this work, in line with others [6,9], has established a functional benefit of dietary nitrate supplementation on exercise performance.
Most of the earlier work on the ergogenic effects of nitrate supplementation was focused on endurance type sports, while little attention has been given to high-intensity and/or intermittent type exercise performance. However, recent findings suggest that nitrate might largely convey its effects on exercise performance through type II muscle fibers [10,11]. Ferguson et al. [10] used a rat model to assess the effects of dietary nitrate supplementation on blood flow in vivo during submaximal exercise. The increases in blood flow and vascular conductance in the exercising limbs were primarily observed in fast twitch muscle fibers. In line with these observations, Hernandez et al. [11] reported that dietary nitrate supplementation improves intracellular calcium handling in fast-twitch muscles of mice, which resulted in increased force production. Based on these findings in rodents, it could be suggested that the ergogenic effects of nitrate might be most profound for activities that recruit type II muscle fibers [10,11], i.e., (very) high-intensity exercise bouts of short duration.
Soccer is one of the world’s most widely performed team sports and is characterized by players performing multiple bouts of high-intensity running and sprinting throughout the 90 min of a match, during which there is heavy reliance on the contribution of type II muscle fibers [12]. These periods of high-intensity activity are alternated with periods of relative recovery, resulting in an intermittent type intensity profile [12,13,14]. The Yo-Yo Intermittent recovery test level 1 (Yo-Yo IR1) is an often used measurement tool to simulate these soccer specific activities in a controlled setting, thereby allowing the reliable and feasible assessment of physical performance in soccer players [15]. Indeed, the Yo-Yo IR1 test has been shown to cover aspects of both aerobic as well as anaerobic performance in soccer players, with a strong link towards the ability to perform high-intensity intermittent type exercise throughout a match [12,15]. Using the Yo-Yo IR1, two previous studies described improved high-intensity intermittent type exercise performance following nitrate-rich beetroot juice ingestion in recreationally active team sport players [16,17]. These observations were the first evidence of ergogenic benefits that team sport players (such as soccer players) could have from nitrate ingestion. The earlier of the two studies observed these effects after ingestion of a high nitrate dose (1780 mg, 28.7 mmol) in the 30 h prior to the high-intensity intermittent running test [16]. Although effective, the dosing strategy that was applied in the study strongly deviates from that of current multiday supplementation protocols that have proven effective in endurance athletes [4,5,7]. More in line with current nitrate supplementation regimens, Thompson et al. recently concluded that a five-day nitrate supplementation protocol with a lower daily dose of nitrate was also effective in improving high-intensity intermittent running performance in recreational athletes [17]. Extending on this finding in recreational athletes, we hypothesized that a homogenous group of trained soccer players performing intermittent type exercise would also benefit from nitrate ingestion. Therefore, we assessed the effects of a six-day nitrate-rich beetroot juice supplementation protocol on high-intensity intermittent running performance in a group of trained soccer players.

A total of 40, first team, male soccer players competing in the 2nd and 3rd Dutch amateur league were recruited to participate in the study. After being informed about the purpose and potential risks of the study, all subjects provided written informed consent. The experimental protocol and procedures were approved by the medical ethical committee of the Maastricht University Medical Centre, the Netherlands (METC 153006; ClinicalTrials.gov: NCT02436629). Eight subjects failed to complete the study because of injury (n = 3), failure to comply with the protocol (dietary/activity standardization procedures; n = 4), or due to personal time constraints (n = 1). Data of the remaining 32 subjects (age: 23 ± 1 years, height: 181 ± 1 cm, weight: 77 ± 1 kg, BMI: 23.4 ± 0.4 kg/m2, playing experience: 15.2 ± 0.5 y) was used in the analysis.

This double blind, randomized, placebo-controlled, cross-over study was designed to investigate whether six days of nitrate-rich beetroot juice (BR) supplementation improves intermittent type exercise performance in trained soccer players. Subjects were required to report to the research facility on four occasions, spread over a three-week period. Following a screening session (visit one), subjects visited the research facility ~1 week prior to the first experimental trial to get familiarized with the Yo-Yo intermittent Recovery test level 1 (Yo-Yo IR1) and to receive their supplemental beverages (visit two). No blood or saliva samples were collected during familiarization. The experimental trial days (visits three and four) that followed were each on day six of the nitrate-rich or nitrate-depleted beetroot juice supplementation period, with the last supplemental bolus being ingested 3 h prior to performing the Yo-Yo IR1. Wash-out between the two supplementation periods was at least eight days.

2.3. Supplementation Protocol and Standardization of Physical Activity and Diet

During the two 6-day supplementation periods, subjects ingested 2 × 70 mL/day of beetroot juice. The choice for beetroot juice was largely based on previous observations by us [18], and by others [19], that suggest more pronounced benefits from nitrate ingestion through plant based sources than following sodium nitrate ingestion. The daily 140 mL bolus of nitrate-rich beetroot juice (BR) provided ~800 mg of nitrate (~12.9 mmol), while the beetroot juice placebo (PLA) was similar in taste and appearance but instead was depleted of nitrate (both supplied by Beet It, James White Drinks Ltd., Ipswich, UK). Subjects were instructed to ingest the 2 × 70 mL shots around the same time each day (~5 pm), which was based on the time the final bolus was ingested on day six of supplementation; i.e., 3 h prior to the exercise test. In addition, subjects recorded their activities and dietary intake in the 36 h prior to the first experimental trial, which were then replicated in the 36 h prior to the second trial. Subjects refrained from strenuous physical exercise or labor in the 48 h leading up to the trial days, and did not consume caffeine or alcohol in the 12 h and 24 h prior to each trial, respectively. To prevent any attenuation in the reduction of nitrate to nitrite by commensal bacteria in the oral cavity, subjects refrained from using antibacterial mouthwash/toothpaste and chewing gum during the six-day supplementation periods [20]. No restriction was set for the consumption of nitrate-rich foods. This was done to allow for the determination of the additional effect of dietary nitrate on performance, on top of the normal diet. As has also been done previously [21], on test days, all subjects were provided with a standardized dinner that was consumed ~3.5 h prior to the exercise test. After consumption of this meal and the final supplemental bolus, subjects were only allowed to consume an ad libitum amount of water in the hours that followed. The amount of water consumed before and during the first trial was replicated during the second trial.

On the last day of each supplementation period, subjects reported to the research facility ~2 h after ingesting the last 140 mL bolus of beetroot juice. The trials started with collection of a single antecubital venous blood sample and collection of a saliva sample for determination of pre-exercise nitrate and nitrite concentrations (2.5 h after ingesting the last supplemental bolus). Subjects then filled out a gastrointestinal (GI) tolerance questionnaire to assess GI complaints as a result of supplement ingestion. A heart rate monitor (Zephyr Technology Corporation, Annapolis, MD, USA) was then fitted before subjects performed a standardized 10-min warm-up, after which the Yo-Yo IR1 was performed. Heart rate was monitored continuously (1 Hz) to calculate mean heart rate throughout the test, as well as peak heart rate reached near the end of the Yo-Yo IR1 (30-s peak heart rate).
The warm-up and the Yo-Yo IR1 were performed indoors in a sports hall, on a 2 by 20 m running lane that was marked by cones, as described previously by Krustrup et al. [15]. The test consisted of repeated 2 × 20 m sprints between a starting, turning, and finishing line at a progressively increasing speed controlled by audio bleeps from an audio system. Between each 2 × 20 min run, subjects had a 10-s active recovery period in an area of 5 × 2 m that was marked by cones behind the start/finishing line. When a subject failed to cross the finish line before the final bleep, a warning was given. When a subject failed to cross the finish line before the bleep for a second time, the final distance covered was registered and represented the end result [15]. Immediately after completing the Yo-Yo IR1, subjects rated their perceived exertion on a Borg 6–20 scale [22].

Blood samples were collected in Lithium-Heparin containing tubes and immediately centrifuged at 1000× g for 5 min, at 4 °C. Aliquots of plasma were frozen in dry-ice after centrifugation, and were stored at −80 °C for subsequent analysis of plasma nitrate and nitrite concentrations. Saliva samples were collected in 2 mL Eppendorf cups and stored at −80 °C until nitrate and nitrite concentrations were determined in both saliva and plasma using chemiluminescence, as described previously [18].

A sample size of 40 subjects, including a 20% dropout, was calculated with a power of 80% and an alpha of 0.05 (two-sided) to detect a 4.2% difference in the distance covered during the Yo-Yo IR1 between BR and PLA. Performance data from the Yo-Yo IR1, heart rate, and plasma and saliva data were analyzed with a paired samples t-test (BR vs. PLA). Effect size of Yo-Yo IR1 performance was determined using Cohen’s dz statistical calculation for paired samples. Heart rate data of 7 subjects was incomplete (due to technical problems and/or shifting of the chest bands) and was therefore not included in the analysis. Pearson correlation coefficients were calculated to assess whether differences in plasma or saliva nitrate and nitrite concentrations between trials were associated with the difference in Yo-Yo IR1 performance or heart rate variables between BR and PLA. Statistical significance was set at p < 0.05, and all data were analyzed using SPSS 21.0 (version 21.0, IBM Corp., Armonk, NY, USA), and are presented as means ± SEM.

Based on the present findings in a large sample of trained soccer players, we conclude that six days of nitrate-rich beetroot juice ingestion improves high-intensity intermittent type exercise performance.

This study was financially supported by a grant from the Dutch Technology Foundation STW. 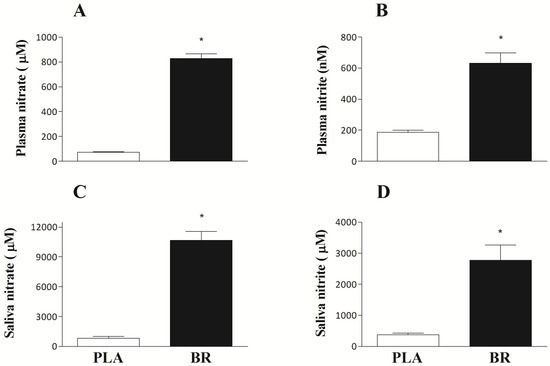