Lifestyle and Dietary Determinants of Serum Apolipoprotein A1 and Apolipoprotein B Concentrations: Cross-Sectional Analyses within a Swedish Cohort of 24,984 Individuals

Ganoderma lucidum is a bitter fungus with a glossy exterior and a woody texture [1]. It is commonly referred to as “lingzhi” in China, India and Japan, and it has been used in most Asian countries for the promotion of health and longevity for centuries [1,2]. Numerous pharmacological effects associated with lingzhi have been recorded, among which are immunomodulatory [3], anti-inflammatory [4], antiviral [5], antioxidative, antiaging and antitumor [6] properties. Several studies have shown that Ganoderma lucidum contains a wide range of bioactive compounds associated with the promotion of good health [1,2]. For all these reasons, Ganoderma lucidum is considered an interesting fungus, widely used in alternative medicine and proven to have numerous implications for use as a potential anticancer drug; however, further research needs to be done to quantify it for personalized medicine, especially in treating specific tumor diseases such as prostate adenocarcinoma (PCa) and other cancers [7]. The biological activities reported from preparations from Ganoderma lucidum are remarkable and are given the most emphasis herein as distinct from the structure/activity information. The metabolites consist of mainly polysaccharides and terpenoids, especially phenolic compounds Many of these biological compounds work against the major diseases of our time, and hence the present research is of great importance. The list of effects is huge, ranging from anti-cancer properties to relieving blockages of the bladder. However, the reports have not all been validated scientifically, and it is necessary to test every single pure component of the Ganoderma lucidum extracts to get convincing evidence about these features. It is a prime example of an ancient remedy being of great relevance to the modern era. We consider, as an assumption, that the therapeutic effects attributed to the fungus have been proven [1]. The next step is to produce some effective medicines, which may be hampered by problems of mass production. In recent years, our laboratories have been engaged in studying the effects of curcumin in several cancer cell lines [8,9,10,11]. Curcumin is a component of the Indian spice turmeric (Curcuma longa), known for its safety and low cost. Curcumin can selectively modulate multiple cell signaling pathways linked to inflammation and to survival, growth, invasion, angiogenesis, and metastasis of cancer cells. The aim of this study is to compare the effects of curcumin, considered as a positive control at a concentration of 10 µM, to treatment with Ganoderma lucidum extracts, testing different concentrations of these compounds and evaluating their effects on cell viability and pro-inflammatory cytokine secretion.

Ganoderma lucidum was provided by A. Arulappa Premkumar, Royappa nagar Tambaram, Chennai South India. The powder of dried Ganoderma lucidum was used for the preparation of mushroom extract. For the dimethyl sulfoxide (DMSO) extraction 3 gr of mushroom powder were mixed with 100 mL of DMSO and placed on a shaker for 24 h at room temperature. The solution was filtered with 3M™ 740 Cartridge and then placed on the rotary evaporator vacuum, for 15 min at 37 °C. Then the residue was dissolved in 100 mL of DMSO and stored at 4 °C for further analysis. The ethanolic extract was prepared using dried powder derived from fruiting body of Ganoderma lucidum (5.25 g), in ethanol 70% v/v (65 mL) for 10 h at room temperature, mixing with a blender. The suspension was filtered with Whatman® #2 qualitative cellulose filter (Whatman, Maidstone, UK) and concentrated to 50 mL under vacuum; then the extract was stored at −20 °C for further analysis.
Curcumin powder, used for in vitro experiments, was obtained from Sigma Aldrich (Milan, Italy), it was dissolved in DMSO at room temperature and stored at −20 °C.

The effect of Ganoderma lucidum on cell proliferation was determined by using TACS 3-(4,5-dimethylthiazol-2-yl)-2,5-diphenyltetrazolium bromide (MTT) cell proliferation assay (Trevigen, Githersburg). The cells, cultured in triplicate in a 96-well plate (2 × 104 per well), were incubated with DMSO or ethanolic Ganoderma lucidum extract, at different concentration. Then the cells were incubated for 24 h and 48 h at 37 °C under an atmosphere of 5% CO2. After this period the MTT solution was added to each well and incubated for 2 h at 37 °C. An extraction buffer (20% sodium dodecyl sulphate (SDS) and 50% dimethylformamide) was added, and the cells were incubated overnight at 37 °C. The absorbance of the cell suspension was measured at 570 nm using a microplate reader (DAS Technologies, Chantilly, VA, USA). This experiment was performed in triplicate, and the statistical analysis was performed to obtain the final values.

MDA-MB 231 and B16-F10 cells were harvested from the exponential growth phase, washed twice by 1× Phosphate Buffered Saline (PBS) and resuspended in the respective medium, seeded at the density of 106 cells per well into a six-multiwell plate and incubated at 37 °C in a humidified atmosphere of 5% CO2 for 24 h. Then, in each well, was made an horizontal slit with a white tip, in a central position; after a PBS 1× washing cells were incubated in the absence or presence of DMSO Ganoderma lucidum extract at different concentrations for 48 h. Cell migration on the slit of the confluent well was assessed at 0, 48 h, in each condition, by light microscopy reversed phase (Leica microsystems).

Cytokines production in cultural supernatant was determined by ELISA as recommended by the manufacturer (Sigma Aldrich, Milan, Italy). Briefly, MDA-MB 231 and B16-F10 cells (1.2 × 105 cells/well) were seeded in 12-well plate in HIGH GLUCOSE DMEM (4.5 g/L Gibco) supplemented with 10% fetal bovine serum FBS (Gibco, Long Island, NY, USA) and 1% penicillin/streptomycin (P & S Sigma Aldrich) at 37 °C in a humidified 5% CO2 atmosphere. After pre-incubation for 24 h and starved in serum-free medium for 2.5 h, the cells were treated with or without 0.1 mL of a 2 and 5 mg/mL solution of DMSO Ganoderma lucidum extract for 30 min before exposure to LPS (50 ng/mL) for 12 h. The culture medium without any dilution was used to assay the cytokine production for four cytokines including IL-6, IL-8, MMP-2 and MMP-9 as recommended by the manufacturer. The sensitivity of this method was less than 10 pg/mL, and the assay can accurately detect cytokine since the range of 1–32,000 pg/mL.

Ganoderma lucidum is a mushroom rich with bioactive compounds, among which are fatty acids, nucleosides, amino acids, proteins, peptides, alkaloids, steroids, enzymes, triterpenoids and polysaccharides. Among all of these, triterpenoids and polysaccharides represent the main constituents contributing to its anticancer functions [14,15]. Many Ganoderma lucidum polysaccharides (GLPS) exert immune-modulating functions through activating the expression of cytokines associated with inflammatory response (such as interleukin-1, interleukin-6, and tumor necrosis factor-α) or anti-tumor activity (such as interferon-γ and tumor necrosis factor-α) [16]. Even if some authors indicate a direct cytotoxicity of GLPS on cancer cells [17], the anticancer functions of GLPS are, however, still generally believed to be closely associated with their immune-stimulating effects [1]. Growing clinical evidence suggests the important role of pro-inflammatory cytokines during tumor development. Specifically, many cytokines were reported to act as pro-inflammatory factors both in melanoma and triple-negative breast cancer: as an example, recent studies have shown that several cytokines are produced by cancer cells, or by the tumor microenvironment, in order to increase their progression and survival. Specifically, the association between interleukin-6 (IL-6) and the pathogenesis of melanoma and breast cancer was studied [18,19]. Increased IL-6 expression has been related to an advanced disease stage and decreased survival in breast and melanoma cancer patients [20,21]. The release of IL-6 is biologically related to an induction of tumor cell proliferation and inhibition of cellular apoptosis through the involvement of Janus kinases (JAKs) and signal transducer and activator of transcription 3 (STAT3). Similarly, interleukin-8 (IL-8), a chemokine with a defining CXC amino acid motif, is characterized by important tumorigenic and pro-angiogenic properties in both cancers and it is associated with poor prognosis [22,23]. Moreover, IL-8 over-expression is involved in the proliferation, metastasis, angiogenesis and sensitivity to chemotherapeutics in breast cancer, primarily through the activation of AKT and MAPK signaling which results in the increased activation of NF-κB [12,13]. Melanoma and breast cancer cells are able to release several interleukins such as IL-8 and IL-6 under pro-inflammatory conditions [24,25]. Our data demonstrate that DMSO Ganoderma lucidum extract exerts anticancer effects on cell migration and anti-inflammatory effects after stimulation with LPS. All together, our data indicate that the Ganoderma lucidum extract could represent a new strategy for anticancer treatment and anti-inflammatory properties due to the presence of a wide range of compounds which exert beneficial effects on health and potentiate the immune response.

These results suggest that the complex of bioactive compounds derived from Ganoderma lucidum extract, presumably a mix of polyphenols and carbohydrate-flavonoid complexes, can be beneficially exploited in anticancer and anti-inflammatory therapies against melanoma and breast cancer. However, further biological studies are required and are currently being carried out in order to characterize the molecular mechanisms of action of the extracts and to elucidate the cellular pathways involved. More specifically, molecular biology studies are currently ongoing in our research group in order to identify the panel of genes influenced by the incubation of cancer cells with the extracts. Therefore, the use of Ganoderma lucidum extracts may open a new therapeutic opportunity in the treatment and management, during chemotherapy, of melanoma and breast cancer, especially considering its strong anti-inflammatory and anti-metastatic actions which can lead to it being used as a new therapeutic tool in cancer management.

A special thank to Diego de Fusco for experimental support and scientific suggestions. This is a spontaneous study and it has not been supported by specific funding.

The authors declare no conflict of interest. Any role of the funding sponsors in the design of the study; in the collection, analyses or interpretation of data; in the writing of the manuscript, or in the decision to publish the results. 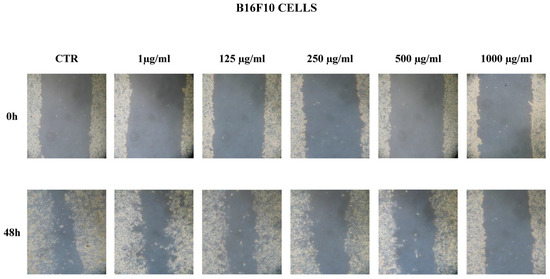 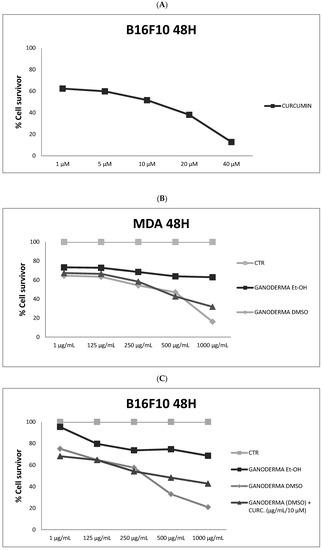 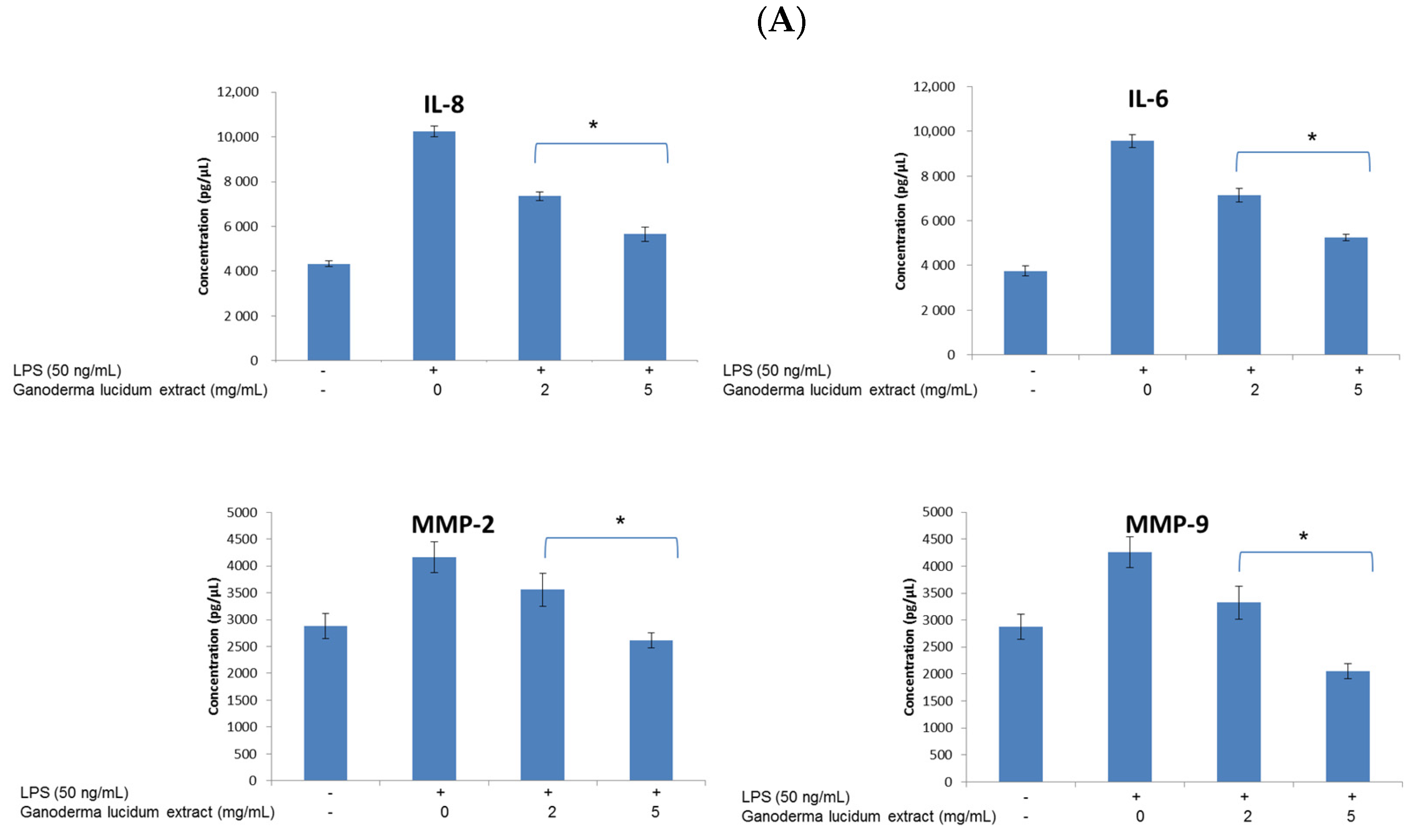