How Nutrition Sensitive Are the Nutrition Policies of New Zealand Food Manufacturers? A Benchmarking Study
Previous Article in Journal

Chemopreventive Potential of Raw and Roasted Pistachios Regarding Colon Carcinogenesis

Pistachios are rich in health-promoting bioactive compounds such as B vitamins, γ-tocopherol, polyphenols and dietary fiber, which could contribute to the reduction of colon cancer risk in terms of chemoprevention (Fischer, S.; Glei, M. Health-Potential of Nuts. Ernaehrungs Umsch. Int. 2013, 60, 206–215.). Since pistachios are often consumed roasted, the present study aims at investigating the influence of different roasting conditions (RC) on potential chemopreventive effects of pistachios in colon adenoma cells such as growth and apoptosis, genotoxic- and anti-genotoxic effects and modulation of gene expression of detoxifying enzymes (CAT, SOD2, GPx1, and GSTP1). Fermentation supernatants (FS) were obtained from raw and roasted (RC1 = 141 °C/25 min, RC2 = 160 °C/15 min and RC3 = 185 °C/21 min) pistachios after in vitro fermentation. FS of pistachios significantly reduced LT97 cell growth in a time- and dose-dependent manner. Compared to the blank control, pistachio FS (2.5%) led to a significant average reduction of H2O2-induced DNA damage (1.5-fold). Levels of CAT mRNA were significantly increased (1.3-fold, on average for 5% FS). Pistachio FS (5%) significantly increased the number of early apoptotic cells (up to 2.1-fold) and levels of caspase-3 activities (up to 6.9-fold). The present results confirm a chemopreventive potential of pistachios, which is mediated by growth inhibition, induction of apoptosis and anti-genotoxic effects, as well as induction of CAT. These effects remain mostly unaffected by roasting.
Keywords: apoptosis; colon cancer; dietary fiber; pistachio apoptosis; colon cancer; dietary fiber; pistachio

Nuts, such as pistachios, are considered as health-promoting food, because of their high content of unsaturated fatty acids, dietary fiber, plant secondary metabolites, vitamins and micronutrients [1]. For example, a correlation between nut consumption and a reduced incidence of tumor diseases, such as cancers of colon, endometrium or pancreas [2], has been observed. The Nurses’ Health Study showed an inverse association between nut consumption and pancreatic cancer in women [3]. The same effect was found in the European prospective investigation into cancer and nutrition (EPIC) study for colon cancer [4], a cancer form whose incidence depends largely on the diet [5].
A possible reason for the observed effect against colon cancer could be the high content of dietary fiber in nuts. Fiber content ranges 5–12% depending on the type of nut [1], with the fiber content of pistachios being about 9% [6,7]. Different studies already demonstrated that dietary fiber can decrease risk for colon cancer [8,9]. This could be at least partially due to the fermentation of dietary fiber by the human gut microbiota, which results in the formation of short-chain fatty acids, e.g., butyrate [10]. Butyrate is already well recognized for its chemopreventive potential against colorectal cancer [11,12,13].
Furthermore, nuts are rich in bioactive substances such as vitamins, carotenes and phenolic substances [14]. In comparison to other nuts, pistachios contain high concentrations of thiamine, pyridoxine, γ-tocopherol and largely the carotenes lutein and zeaxanthin [14]. These might contribute to the chemopreventive potential against colon cancer, especially because of antioxidant properties [15,16].
Regarding the potential health effects of pistachios, it should be noticed that these are consumed mostly roasted [17]. The roasting process influences the taste, color and texture of pistachios and ensures microbiological safety [18,19,20]. Heat-treatment causes changes of the chemical structure of nut ingredients and formation of different metabolites such as Maillard reaction products. These generate the characteristic flavor and taste of roasted pistachios [21]. However, the roasting process may also affect health-promoting ingredients. Stuetz et al., for example, demonstrated an association between roasting and loss of β-carotene and tocopherols in pistachios [14]. In other studies, it was shown that the content of phenolic molecules in pistachios increased during roasting [20].
The aim of the present study was to investigate: (1) potential chemopreventive effects of pistachios regarding colon cancer by analyzing genotoxic and anti-genotoxic effects, cell growth inhibition and apoptosis as well as expression of genes involved in detoxification; and (2) the impact of roasting on these potential chemopreventive effects. Therefore, LT97 colon adenoma cells, which represent an early stage of colon carcinogenesis, were used to determine the impact of differentially roasted and in vitro-digested pistachios on above mentioned chemopreventive markers.

In vitro digestion and fermentation of 2 g of ground pistachios was performed as described recently [23]. Briefly, after incubation with α-amylase for 5 min and pepsin for 2 h (37 °C), pistachio samples were treated with an intestinal fluid containing pancreatin and oxgall (26 mg and 50 mg, respectively, in 5 mL of 11 mM bicarbonate buffer; pH 6.5) and dialyzed under semi-anaerobic conditions (6 h, 37 °C). After in vitro fermentation of pre-digested samples (24 h, 37 °C) using a feces inoculum obtained from at least three healthy donors, fermentation supernatants (FS) were obtained by centrifugation. A blank fermentation sample without pistachios, representing the pure feces inoculum, was used as negative control, while Synergy1® (oligofructose-enriched inulin, Beneo, Mannheim, Germany) served as positive control. FS obtained from the blank (fermentation negative control), Synergy1® (fermentation positive control), raw and roasted pistachio (RC1, RC2, and RC3) samples were generated and used for cell culture experiments, which are described in the following sections.

LT97 colon adenoma cells were treated with FS obtained from raw and roasted pistachios in concentrations of 2.5%, 5%, 10% and 20% for 24 h, 48 h and 72 h. To determine time- and dose-dependent effects of pistachio FS on the growth of LT97 cells, the DAPI (4′,6-diamidino-2-phenylindol) assay was used as described previously [23]. Furthermore, sub-toxic concentrations of FS (EC25 and EC50: 2.5% and 5% FS, respectively) were determined via nonlinear regression/one phase exponential decay from three independent experiments (GraphPad Prism® version 5, GraphPad Software, San Diego, CA, USA).

LT97 cells were treated with FS obtained from raw and differentially roasted pistachios and fermentation controls in concentrations of 2.5% and 5% in cell culture medium as well as 4 mM butyrate (additional positive control for dietary fiber fermentation) for 24 h. Then, RNA was isolated using the RNeasy Plus Mini Kit (Qiagen, Hilden, Germany) according to manufacturer’s instructions. Concentrations of RNA were measured with a NanoDropND-1000 photometer (NanoDrop Technologies, Wilmington, DE, USA). The RNA integrity number (RIN) was determined using the Agilent RNA 6000 Nano Kit (Agilent Technologies, Santa Clara, CA, USA) and an Agilent 2100 Bioanalyzer (Agilent Technologies, Waldbronn, Germany) according to the manufacturer’s instructions. Only RNA samples with a RIN >9 were used for further experiments.

The SCRIPT Reverse Transcriptase Kit (Jena Bioscience, Jena, Germany) was used to obtain complimentary DNA via reverse transcription of 1.5 µg total RNA in a 20 µL reaction mix (42 °C, 50 min). The reaction was stopped at 72 °C for 15 min and remaining RNA was removed by RNaseH treatment at 37 °C for 20 min. For qPCR experiments, cDNA samples were diluted (1:50) in RNase- free water. The mRNA levels of antioxidant and phase II enzymes (CAT, SOD2, GPx1 and GSTP1) were analyzed by qPCR as described previously [23].

After treatment (12 h and 24 h) of LT97 cells with FS of raw and roasted pistachios and controls (blank, Synergy1®) in concentrations of 2.5% and 5% as well as butyrate (4 mM), early apoptotic cells were quantified via flow cytometry (Cell Lab Quanta™ SC MPL 1.0, Beckman Coulter) using the annexin V-FITC/7-AAD (fluorescein isothiocyanate/7-aminoactinomycin D) kit (Beckman Coulter) according to manufacturer’s instructions. Caspase-3 activity as marker of advanced apoptosis was analyzed in LT97 cells treated with pistachio FS (2.5% and 5%) and FS of the controls for 24 and 48 h as well as butyrate (4 mM) as described previously [23]. Relative caspase activity was calculated as fold change relative to the medium control, which was set to 1.

Levels of CAT mRNA were significantly higher than the medium control upon treatment with all FS and butyrate as positive control (Figure 3a). Incubation with 2.5% and 5% FS obtained from raw and roasted pistachios resulted in a dose-dependent average increase of CAT mRNA levels of 3.1- and 4.8-fold, respectively. These upregulation of CAT mRNA expression was comparable to the induction caused by butyrate (4.0-fold) or FS derived from Synergy1® (FS 2.5%: 2.1-fold, FS 5%: 3.9-fold), while the induction of CAT expression upon treatment with the blank control was lower (FS 2.5%: 2.3-fold, FS 5%: 2.8-fold). Importantly, treatment with pistachio FS, particularly at a concentration of 5%, resulted in significantly higher CAT mRNA levels compared to the blank control.
The induction of SOD2 mRNA expression by pistachio FS was less pronounced than the induction of CAT gene expression (Figure 3b). FS obtained from Synergy1® (FS 5%=2.0-fold), raw pistachios (FS 5%: 2.2-fold), RC1 (FS 2.5%: 2.0-fold), RC2 (FS 5%: 2.0-fold) and RC3 (FS 5%: 1.9-fold) led to significantly higher SOD2 mRNA levels than medium (control), while the blank control or butyrate did not induce SOD2 expression.
GSTP1 mRNA levels were significantly induced in comparison to the medium control by 5% FS obtained from pistachios (2.0-fold, on average), the blank control (1.7-fold), and butyrate (1.4-fold) (Figure 3c).
In contrast, GPx1 mRNA expression was neither modulated by FS obtained from fermentation controls nor from raw and roasted pistachios (Figure 3d). Furthermore, even butyrate led to a significant down-regulation of GPx1 mRNA levels (0.6-fold).
In general, the roasting of the pistachios did not affect the modulation of the gene expression of CAT, SOD2, GSTP1 or GPx1.

This is the first study investigating the impact of different roasting conditions on chemopreventive effects of pistachios. The results of the present study indicate that pistachios exhibit chemopreventive properties by inhibiting growth of adenoma cells, reducing levels of DNA damage and inducing CAT expression as well as apoptosis. In addition, the roasting process had no consistent or diminishing impact on these chemopreventive effects, which is an important finding, since pistachios are often consumed roasted.

This IGF project (AiF 16642 BR) of the FEI (Research Association of the German Food Industry) was supported via AiF (German Federation of Industrial Research Associations) within the program for promoting the Industrial Collective Research (IGF) of the German Ministry of Economic Affairs and Energy (BMWi), based on a resolution of the German Parliament. We would like to thank Nucis e. V. Germany for funding and Paramount Farms for allocation of pistachios. We thank Probat-Werke von Gimborn Maschinenfabrik GmbH for roasting the nuts, especially Thomas Koziorowski and Thomas Elshoff. We express our gratitude to Gudrun Steinmetzer for her excellent technical assistance and to Christian Saupe for performing growth inhibition experiments. 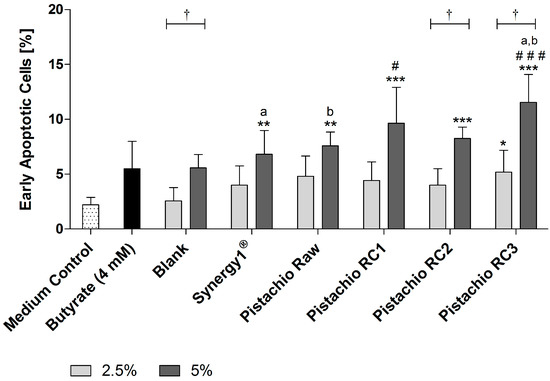 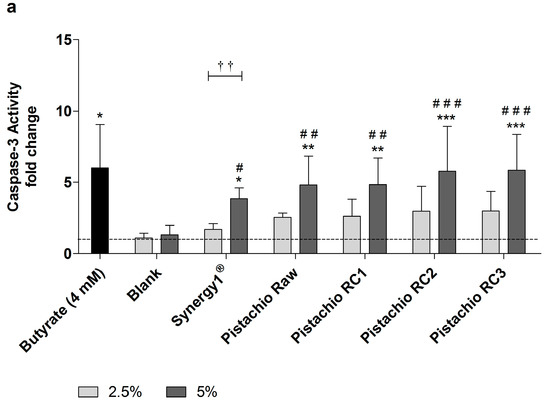 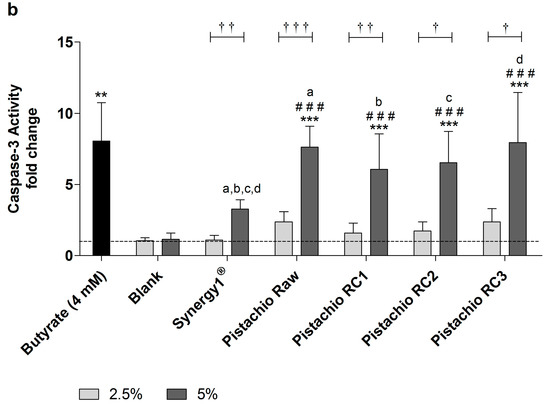 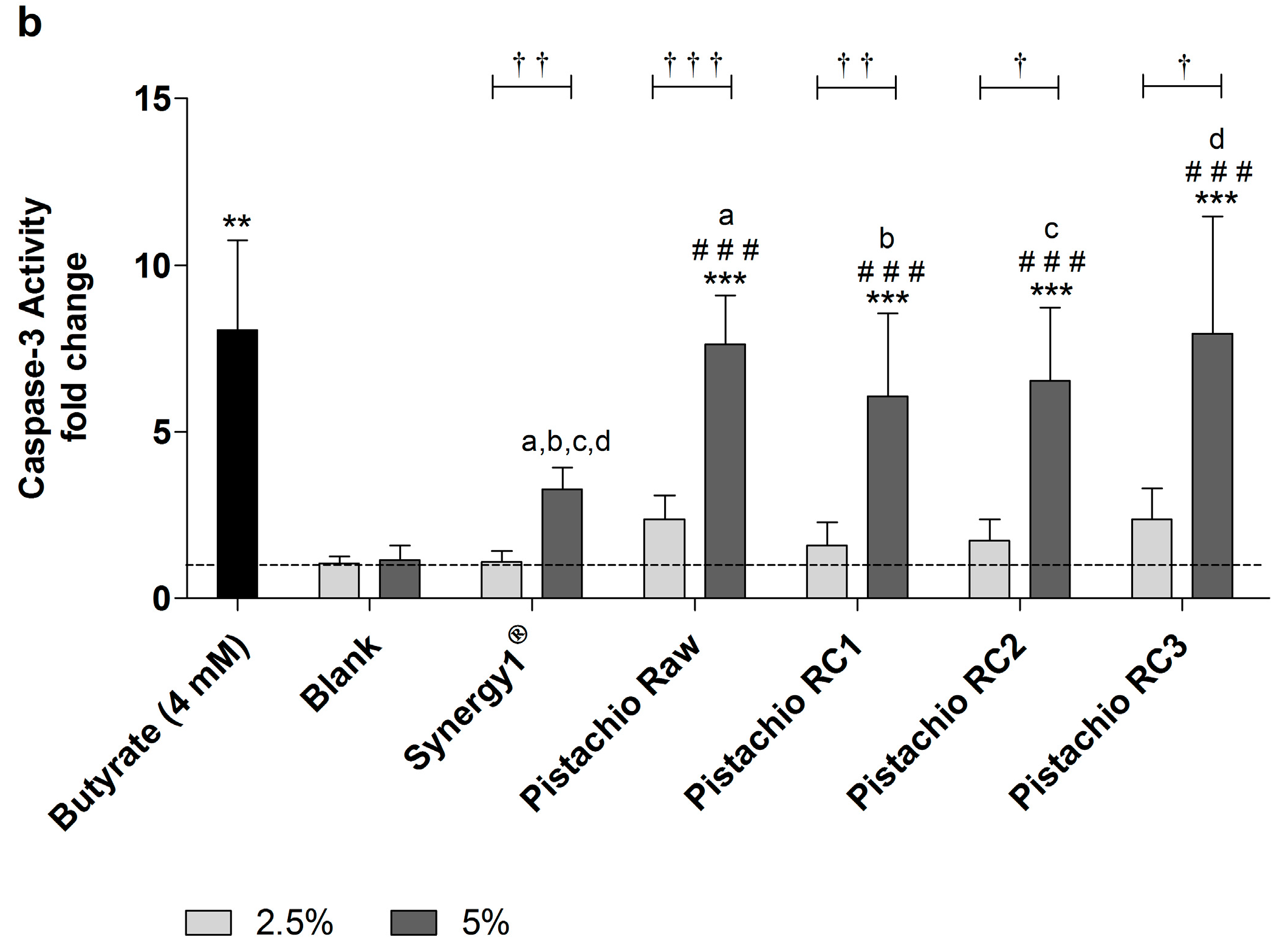