Obesity and metabolic syndrome (MS) complicate metabolic derangement, including insulin resistance, hypertension, and dyslipidemia [1], and are also closely related to aging [2,3]. Therefore, maintaining metabolic health may have beneficial effects for the prevention of metabolic derangement and for anti-aging. Basically, improvement of lifestyle, especially diet therapy, such as calorie restriction (CR), is important for the prevention of obesity, MS and cardiovascular disease, which is related to MS based on insulin resistance [4,5]. However, it is not easy to continue CR for a long time, and therapeutic options are still insufficient; therefore, novel treatment modalities, including functional foods, have been investigated. Polyphenolic compounds, such as resveratrol, have attracted attention over the past few decades because previous reports have shown that resveratrol treatment in mice fed a high calorie diet consistently improved various health parameters, including glucose metabolism, endurance and survival [6,7,8,9,10], and these compounds may act as a CR mimetic. In a study on humans, Timmers et al. reported that resveratrol supplementation for 30 days in obese humans showed CR-like effects, such as increased insulin sensitivity, reduced blood pressure (BP), improvement of muscle mitochondrial respiration, and activation of Sirt1 and AMP-activated kinase (AMPK) [11]. Piceatannol is a polyphenolic stilbene phytochemical and is known to be a hydroxylated analog of resveratrol. Piceatannol shows activity similar to resveratrol [12]; however, because its levels in plants such as grapes, and wines, are significantly lower than those of resveratrol [13], it has received far less research attention. Matsui et al. previously found that passion fruit (Passiflora edulis) seeds have a high piceatannol content [14], and several reports have shown that piceatannol has various properties, such as Sirt1 induction activity [15], a vasorelaxant effect [16], upregulation of endothelial nitric oxide synthase (eNOS) expression [17], promotion of collagen synthesis [14], inhibition of melanogenesis [14], and protection of the skin from ultraviolet B (UVB) irradiation [18]. Piceatannol shows much higher activity than resveratrol in some cases [14,17]; however, whether these effects of piceatannol apply to humans remains uncertain. In this study, we aimed to investigate the effects of piceatannol in humans on metabolic health, including glucose metabolism, BP, heart rate (HR), endothelial function, lipids, inflammation, and oxidative stress. Furthermore, we assessed the differences of the effects of piceatannol among overweight and non-overweight men and women.

Participants were recruited through advertisements on local posters. Men or women who were 20–70 years old were eligible, and inclusion was ultimately based on a normal physical examination, including routine clinical biochemistry data. The exclusion criteria included overt endocrine disease, renal disease, hepatic disease, heart disease, malignant disease, anemia, alcohol abuse, smoking, taking prescription medicine and planned lifestyle changes. We enrolled 39 participants, including 10 non-overweight (Body mass index (BMI) < 25 kg/m2) men and 10 non- overweight women, as well as 10 overweight (BMI ≥ 25 kg/m2) men and 9 overweight women, in this study.
The study was an investigator-initiated randomized, double-blinded, placebo-controlled trial. Subjects were randomly assigned (1:1) to treatment for 8 weeks with capsules containing 5 mg of piceatannol, which was purified from passion fruit seed extract using gamma-cyclodextrin (Purity 81.4%) or containing dexitrin, a placebo (2 capsules of piceatannol with 5 mg/capsule, twice daily for a total of 20 mg/day or 2 capsules of placebo (dextrin) 5 mg/capsule, twice daily). The capsules containing piceatannol and placebo with cellulose and other diluents were provided by Morinaga and Company Limited, and packaging and labeling were also performed by Morinaga and Company Limited. Randomization and blinding was performed by the pharmacy at Kanazawa Medical University Hospital. The randomization code was revealed once all the predefined data was recorded. During the trial period, subjects were instructed to abstain from using nutritional supplements and consuming food suspected to contain polyphenols in significant amounts. Furthermore, the importance of maintaining their normal way of life was underscored. Compliance, defined as the proportion of tablets ingested relative to the intended number, was calculated when participants returned the remaining tablets during the final examination.

Examinations were performed on 3 consecutive days at baseline, as well as after 4 and 8 weeks of treatment, with the same equipment and by the same physicians on both occasions. When completing the physical examination, including routine clinical biochemistry data at baseline, capsules were provided and subjects were instructed to initiate capsule consumption in the evening and twice daily until the overnight fast before the examination day at week 4. At week 4, potential adverse events were recorded and fasting blood samples were taken for safety purposes. Additionally, participants visited the hospital on the examination day at week 8 in the morning after overnight fasting, and then blood samples were collected 15 min after taking the capsules for pharmacological purposes.

Patients were given detailed explanations of the study protocol. Informed consent was obtained from each patient. The study protocol was approved by the Regional Committee on Health Research Ethics and the Ethical Committee of Kanazawa Medical University. The trial was registered with the University Hospital Medical Information Network (UMIN No. 000018397).

Body weight (BW) and body composition were measured using In Body (Biospace Japan, Inc., Tokyo, Japan) with the participants lightly clothed. In addition, BP and HR were measured in a sitting position after resting for 5 min. Routine biochemistry and physical examinations were also performed at screening to investigate the presence of exclusion criteria.

FMD was measured at baseline and after 8 weeks by an experienced technician using the UNEX EF38G (UNEX Corporation, Nagoya, Japan). The technician was blinded to the study groups. The detailed protocol and methodology have been previously described in detail [21,22]. All measurements were performed under fasting conditions in the morning in a temperature-controlled room (25 °C). After resting for 15 min, a pressure cuff was placed on the forearm to capture baseline images of the brachial artery using high-resolution ultrasound. Then, the cuff was inflated and kept at 50 mmHg above the systolic BP to occlude the brachial artery. After 5 min, the cuff was released and an image of the brachial artery was captured. The diameters of the brachial artery on the pre- and post-hyperemia images were used to calculate changes in FMD according to the following formula: (FMD (%) = (maximum diameter − diameter at rest) × 100/diameter at rest).

The Profile of Mood States (POMS) is a well-validated questionnaire of mood states and their fluctuations in clinical research [24,25]. We administered the Japanese version of the POMS test (Kaneko Shobo Co., Tokyo, Japan) [25]. Participants rated sixty-five adjectives in terms of how much they had felt each mood state in the past week using a five-point scale from “not at all” to “extremely”. Scores from these sixty-five items were combined to give six global scores of “tension”, “depression”, “anger”, “fatigue”, “confusion” and “vigor”. A total mood disturbance score was also calculated by adding the scores from the first five of these global scores and subtracting ‘’vigor”.
The visual analogue scale (VAS) is a simple assessment tool consisting of a 10 cm line with 0 on one end representing no symptoms and 10 on the other representing the highest intensity ever experienced, which a patient marks to indicate the severity of a specific manifestation. This scale was used to evaluate weariness and stiffness in this study [26].

Data are presented as the means ± standard deviation (SD) unless otherwise indicated. The results obtained at baseline and after 8 weeks of piceatannol supplementation or placebo, as well as changes within a group, were compared using a paired t-test, Wilcoxon Signed-rank Test or Mann-Whitney U-test. The results were statistically significant if p < 0.05 (two sided). Statistical analysis was performed using SAS 9.4 (SAS Institute, Cary, NC, USA). The statistic analyze was performed by Kureha Special Laboratory Co., Ltd. (Tokyo, Japan).

3.4. Changes in Liver and Renal Function Tests and Lipid Data

The results of liver function tests, such as AST, ALT and γ-GTP, and serum Cr, eGFR, and serum UA, as well as lipid data, including the total cholesterol, HDL-C, LDL-C, TG and FFA levels, are shown in Table 4a,b. All data showed no significant differences in any of the groups treated with placebo or piceatannol.

Endothelial function, which was evaluated by FMD; serum levels of ADMA, which is an inhibitory molecule of eNOS; inflammatory markers, including serum hsCRP and IL-6; oxidative stress and anti-oxidative capacity, such as dROM and BAP, also showed no significant differences in any of the groups treated with placebo or piceatannol, and the results are shown in Table 5a,b.

3.6. Changes in Sirt1 and p-AMPK Expression in Isolated PBMNCs

We evaluated mood status using the POMS and VAS tests. Supplementation with piceatannol for 8 weeks did not change the mood status-related parameters from the baseline (Supplemental Table S1).

Our data indicated that supplementation with piceatannol improves insulin sensitivity and might be able to reduce BP and HR in overweight men. However, piceatannol is not associated with other data, including BW, body composition, endothelial function, lipid profiles, inflammation, oxidative stress, mood status, and Sirt1 and p-AMPK expression in isolated PBMNCs. As insulin resistance is the most important factor in the pathophysiology of MS and because hypertension is also a complication of MS, supplementation with piceatannol may be useful for metabolic health, particularly for improving insulin sensitivity in obese men. Insulin resistance is closely related to aging. Therefore, piceatannol may have an anti-aging effect. However, the sample size for this study was very small (n = 5/group) and further studies should be conducted to determine the mechanism by which piceatannol improves insulin sensitivity, as well as reduces BP and HR, and to investigate the dose of piceatannol that is most useful to exert its benefit.

The following are available online at www.mdpi.com/2072-6643/9/10/1142/s1, Figure S1. The graphs show the change rate of Sirt1/β-actin and phospho(p)-AMPK/AMPK in isolated peripheral mononuclear cells for 8 weeks of intervention, which were evaluated by western blotting, Table S1. Data of the visual analogue scale (VAS) and the Profile of Mood States (POMS), including scores of “tension”, “depression”, “anger”, “fatigue”, “confusion” and “vigor” and total mood disturbance score at baseline and after 8 weeks of placebo or piceatannol supplementation (a: men, b: women), Table S2. Adverse events during the intervention.

We thank Yuko Setoguchi, Masahiro Umehara, Ikuko Kurita and Koji Yanae for preparation of piceatannol, and all colleagues in Department of Diabetology and Endocrinology of Kanazawa Medical University.

Boehringer Ingelheim, Mitsubishi Tanabe Pharma, Kyowa Hakko Kirin, Taisho Toyama Pharmaceutical and Ono Pharmaceutical contributed to establishing the Division of Anticipatory Molecular Food Science and Technology. Hiroko Maruki-Uchida and Masahiko Sai are employed by Morinaga and Company Limited. Morinaga and Company Limited provided support in the form of salaries for authors HM-U and MS, and provided the capsules containing piceatannol and placebo with cellulose and other diluents, including packaging and labeling, but did not have any additional role in the data collection and analysis, and decision to publish.

This work was financially supported by Morinaga and Company Limited. 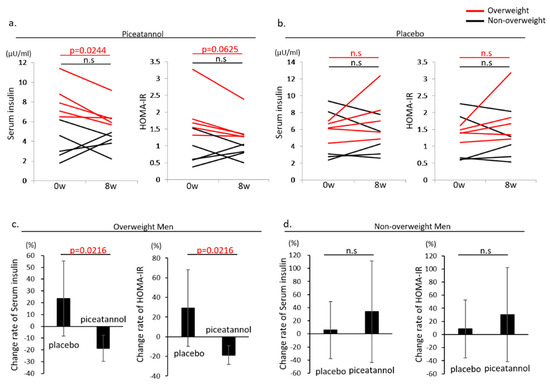 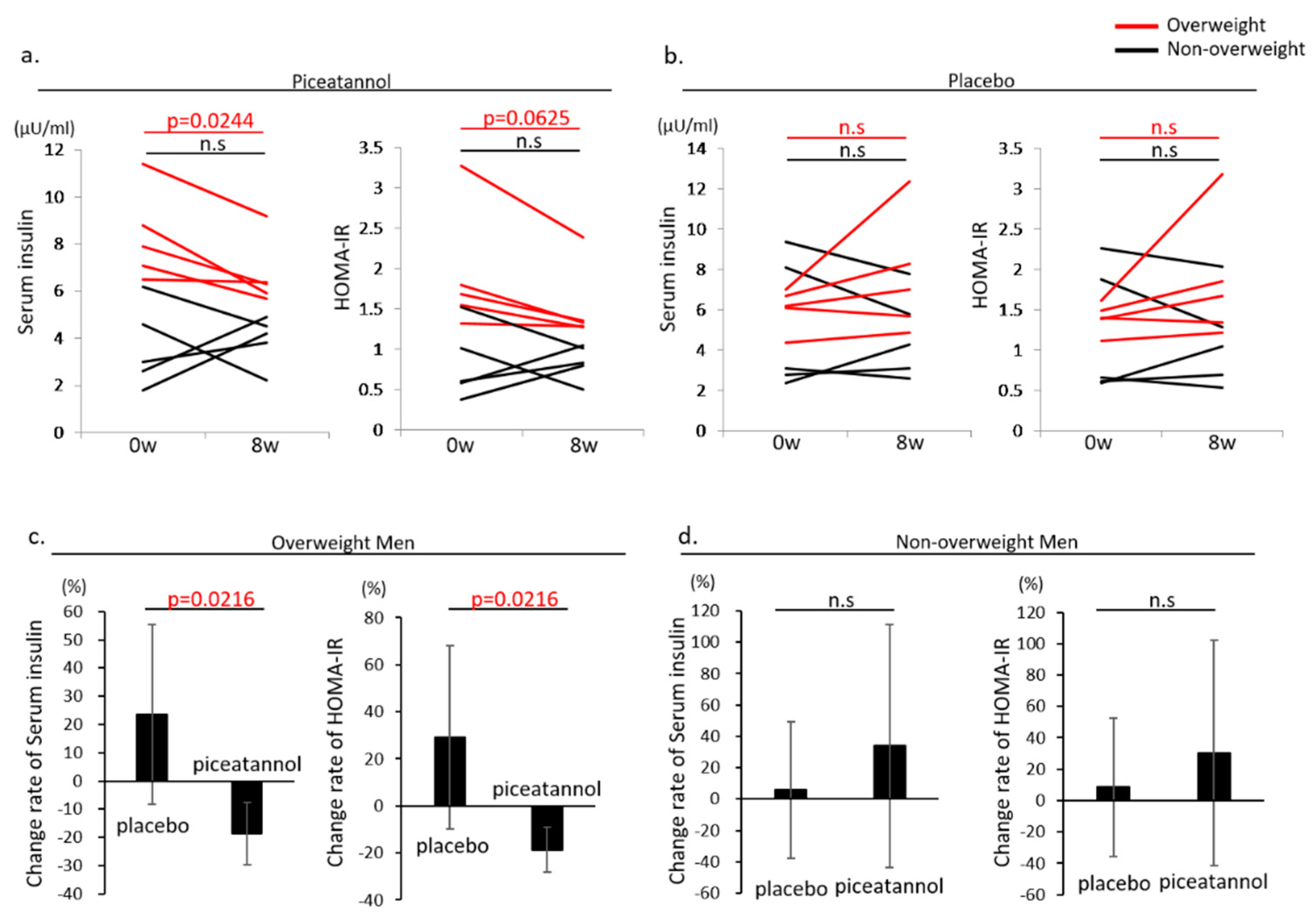