Maternal nutrition during gestation is involved in the offspring’s intestinal development and immunity. The aim of this study was to (1) determine the effects of maternal energy on intestinal digestion and absorption function in offspring, using pigs as a model; and (2) to evaluate the potential effect and mechanisms of maternal energy in modulating immune responses of lipopolysaccharide (LPS)-challenged piglets. After mating, thirty-six nine-parity sows (Landrace × Yorkshire), body weight (BW) (initial body weight 233.56 ± 2.77 kg) were allocated to two dietary treatment groups; a control diet (CON) group and a low-energy diet (LED) group. The nutrient levels of the CON were based on the nutrient recommendations by the National Research Council (NRC, 2012), and contained 3.40 MCal digestible energy (DE)/kg diet and 7.3% crude protein; while the LED contained 3.00 MCal DE/kg diet. The dietary treatments were introduced from day 1 of gestation to farrowing. Intestine samples were collected from the pigs’ offspring at birth, and at weaning (day 28 post-birth). At weaning, male pigs from control and LED groups were intraperitoneally injected with LPS (50 μg/kg body weight) or saline (n = 6), and sacrificed at 4 h post-injection to collect blood, intestine and digesta samples for biochemical analysis. The results indicated that the maternal LED markedly decreased the BW, small intestinal weight, and the ratio of jejunum and ileum villus height to crypt depth in the offspring. Moreover, the activities of lactase and sucrase in newborn piglets’ intestine, and sucrase and maltase in weaning piglet intestine were markedly decreased by the maternal LED. In addition, maternal LED significantly increased the mRNA relative expression of ileal IL-6 and TNF-α in newborn piglets. Plasma IL-1β concentration and colonic Escherichia coli amount were affected by maternal diet (p < 0.05) and LPS challenge (p < 0.001). Maternal LED significant increased the mRNA relative expression of ileal TLR-4, IL-1β and NF-κB as well as decreased ZO-1 in weaning pigs after LPS challenge (p < 0.05). In conclusion, decreasing energy intake could suppress the offspring’s intestinal digestion and absorption function, and increase the susceptibility of weaning piglets to LPS challenge. View Full-Text
Keywords: low energy diet; intestinal; immunity; maternal; offspring low energy diet; intestinal; immunity; maternal; offspring
►▼ Show Figures 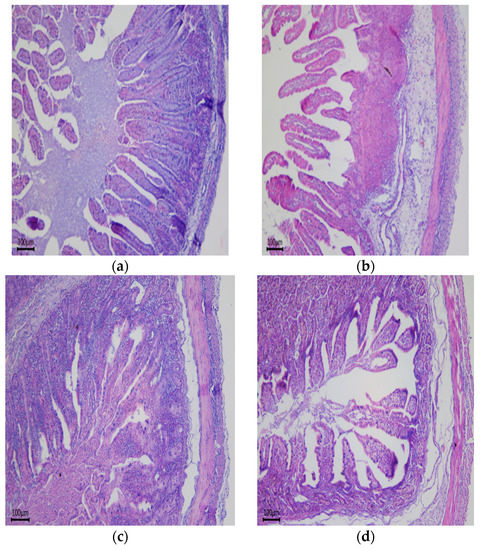