Sarcopenia Impairs Prognosis of Patients with Hepatocellular Carcinoma: The Role of Liver Functional Reserve and Tumor-Related Factors in Loss of Skeletal Muscle Volume
Next Article in Special Issue

Effects of a Lutein and Zeaxanthin Intervention on Cognitive Function: A Randomized, Double-Masked, Placebo-Controlled Trial of Younger Healthy Adults
Previous Article in Journal

Trimethylamine-N-oxide (TMAO) is a small organic molecule, derived from the intestinal and hepatic metabolism of dietary choline and carnitine. Although the involvement of TMAO in the framework of many chronic diseases has been recently described, no evidence on its putative role in the central nervous system has been provided. The aim of this study was to evaluate whether TMAO is present at detectable levels in human cerebrospinal fluid (CSF). CSF was collected for diagnostic purposes from 58 subjects by lumbar puncture and TMAO was quantified by using liquid chromatography coupled with multiple-reaction monitoring mass spectrometry. The molecule was detected in all samples, at concentrations ranging between 0.11 and 6.43 µmol/L. Further analysis on CSF revealed that a total of 22 subjects were affected by Alzheimer’s disease (AD), 16 were affected by non-AD related dementia, and 20 were affected by other neurological disorders. However, the stratification of TMAO levels according to the neurological diagnoses revealed no differences among the three groups. In conclusion, we provide the first evidence that TMAO can be assessed in human CSF, but the actual impact of this dietary metabolite in the patho-physiolgy of the central nervous system requires further study. View Full-Text
Keywords: trimethylamine-N-oxide; gut microbiota; central nervous system trimethylamine-N-oxide; gut microbiota; central nervous system
►▼ Show Figures 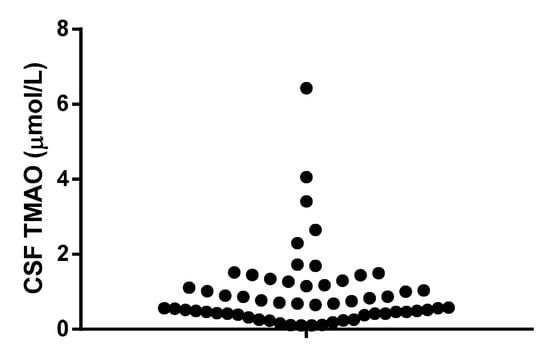