Celiac disease (CD) is considered a systemic immune-mediated disorder elicited by gluten and related prolamines in genetically susceptible individuals [1]. The presence in the serum of anti-tissue-transglutaminase 2 (anti-TG2) antibodies is considered a sensitive and specific biomarker for CD [2].
Anti-TG2 antibodies are produced primarily at an intestinal level by specific B lymphocytes and, using phage display library technology, it has been proven that these antibodies are synthesized in CD patients with preferential use of IGVH5-51 gene family [3]. Once produced, anti-TG2 antibodies can deposit in the small intestinal mucosa [4], even before they can be detected in the circulation [5,6]. Furthermore, TG2 specific IgA deposition precedes the formation of small intestinal lesion in CD [6,7] as it can be detected also in potential CD patients [6,8,9], i.e., patients showing positive serology for CD-specific antibodies, but architecturally normal intestinal mucosa [10]. The presence of mucosal deposits of anti-TG2 antibodies seems to be a predictive marker of future evolution to villous atrophy, as it was seen more often in those potential patients that progress to overt CD than in those remaining in early phase of disease [5,6,8].
Several investigators have shown that intestinal anti-TG2 IgA deposits are also detectable in subjects with diagnosis other than CD with a prevalence ranging from 5 to 20% [11,12,13]; in our experience, up to 12% of pediatric non-CD patients shows mucosal deposits [13]. A similar percentage of non-CD patients producing anti-TG2 antibodies only at an intestinal level has been recently shown by us by measuring anti-TG2 antibodies secreted into supernatants from organ culture of small intestinal biopsy [9]. This phenomenon could be not specific for CD and merely attributable to intestinal inflammation; alternatively, it could be suggestive of a very early condition of gluten reactivity. The subjects initially producing anti-TG2 antibodies only at an intestinal level could become serum positive later and eventually develop small intestinal mucosal damage.
Here we aimed to investigate the intestinal production of anti-TG2 antibodies in patients with normal serum levels of such antibodies and to relate that production to immunohistochemical markers of gluten-dependent enteropathy.

In this retrospective study, we considered 283 patients enrolled between January 2001 and December 2015 at the Department of Pediatrics of the University Federico II in Naples, for whom samples of small intestinal biopsies fixed in formalin, biopsies frozen in optimal cutting temperature compound and organ culture supernatants were available. One-hundred and forty-seven of 283 patients (40 males, mean age 6.9 years) had high serum levels of anti-TG2 antibodies and/or positive serum anti-endomysium antibodies, they underwent a small intestinal biopsy for suspicion of CD. Forty-four of 147 showed a lesion of intestinal mucosa type Marsh 3, according to Marsh classification modified by Oberhuber et al. [14], and had a final diagnosis of CD according to ESPGHAN criteria (1990, 2012) [1,15]; they were referred to as Active CD. One-hundred and three of 147 patients had a normal or slightly infiltrated duodenal mucosa classified as Marsh 0 (n = 40) and Marsh 1 (n = 63). They were defined as Potential CD. One-hundred and thirty-six out of 283 subjects (66 males, mean age 7 years) had normal values of anti-TG2 antibodies and/or absence of anti-endomysium antibodies in the serum. We found that 130/136 showed duodenal mucosa Marsh 0 (n = 98) or Marsh 1 (n = 32), and 6/136 showed Marsh 3a mucosa. They had final diagnosis other than CD: gastroesophageal reflux (n = 52), gastrointestinal functional disorders (n = 32), type 1 diabetes (n = 19), Helicobacter pylori infection (HP, n = 10), eosinophilic esophagitis (n = 8), first degree relatives of CD patients (n = 6), iron deficiency anemia (n = 2), failure to thrive (n = 2), inflammatory bowel disease (n = 2), and autoimmune hepatitis (n = 2). They represented the Non-CD group.
IgA deficiency was ruled out in all enrolled subjects. The use of biopsy specimens was authorized by the Institutional Ethical Committee.

The presence of intestinal deposits of anti-TG2 IgA was investigated on duodenal frozen sections from all patients. Five µm sections were stained using a double-immunofluorescence method, as previously described [16]. The stained sections were evaluated using a fluorescent microscope (Axioskop2 plus; Zeiss MicroImaging Inc., Milan, Italy).

During upper gastrointestinal endoscopy, at least four duodenal biopsies were taken from all patients and fixed in 10% formalin, embedded in paraffin, and then treated for histological and morphometrical analysis performed by light microscopy and by two experienced pathologists. A villous height crypt depth ratio ≥2.2 was considered normal [17]. One further duodenal specimen was embedded in an optimal cutting temperature compound (OCT; Killik, Bio-Optica, Milan, Italy) and stored in liquid nitrogen until used. The last fragment was placed on a stainless steel mesh positioned over the central well of an organ culture dish with the villous surface of the specimens upper-most in medium containing RPMI 1640 (80%; Sigma, Milan, Italy) supplemented with fetal bovine serum (15%; Life Technologies-GibcoBRL, Milan, Italy), l-glutamina (2 mM; Life Technologies-GibcoBRL), penicillin (100 U/mL), streptomycin (100 μg/mL) (Life Technologies-GibcoBRL), and insulin (1 mg/mL; Sigma). The biopsy was cultured for 24 h at 37 °C with the culture medium; it was placed in a sterile anaerobic jar which was gassed with 95% oxygen/5% carbon dioxide. The supernatants were collected and stored at −80 °C until they were analyzed.

Mucosal anti-TG2 IgA antibodies secreted into culture supernatants were measured in undiluted supernatants by enzyme-linked immunosorbent assay (ELISA; EU-tTG IgA kit; Eurospital S.p.A., Trieste, Italy), according to the manufacturer’s instructions. The cut-off value was previously calculated as 2.8 U/mL [9]. When the value of anti-TG2 was higher than the last point of standard curve, supernatants were diluted 1:20 in culture medium.

Immunohistochemical staining for CD3+, TCR-γδ+, and CD25+ cells was performed using four-µm frozen duodenal sections as previously reported [20]. Briefly, duodenal cryostat sections were fixed in acetone for 10 min. After incubation with normal rabbit serum (1:100, Dako, Copenhagen, Denmark) for 20 min, sections were covered with anti-CD3 (1:100; Dako), anti-TCRγδ (1:60; Thema Ricerca, Castenaso (BO), Italy), or anti-CD25 (1:20; Exalpha biological Inc., Shirley, MA, USA), monoclonal antibodies for 1 h. The sections treated for detection of CD3+ and TCR-γδ+ cells were then covered with anti-mouse Envision system-HRP (Dako) for 45 min. The sections treated for detection of CD25+ cells were then covered with rabbit anti-mouse immunoglobulins for 30 min and successively with monoclonal mouse alkaline phosphatase anti-alkaline phosphatase (APAAP; 1:40; Sigma-Aldrich, Milan, Italy) for 30 min. 2-amino-9-ethyl-carbazole (AEC) (Sigma-Aldrich, Milan, Italy) and new fuchsine were used as peroxidase and phosphatase alkaline substrate, respectively. Finally, sections were counterstained with Mayer’s hematoxylin (Sigma-Aldrich) and mounted with Aquamount (BDH, Poole, England). Monoclonal antibodies were diluted in Tris pH 7.4. All incubations were conducted at room temperature in a humid chamber. As a negative control, mouse IgG2a/IgG1 (Dako) replaced the primary antibody.
The number of stained cells per millimeter of epithelium determined the density of cells expressing CD3 and TCR-γδ in the intraepithelial compartment. Cut-off values for CD3+ and TCR-γδ+ cells were 34/mm and 3.4/mm of epithelium, respectively. On the other hand, the number of cells expressing CD25 in the lamina propria was evaluated within a total area of 1 mm2. The cut-off value for CD25+ cells was 4/mm2 lamina propria. Morphometric evaluations were performed using a microscope (Axioscop, Zeiss MicroImaging Inc., Milan, Italy) with a calibrated lens aligned parallel to the muscolaris mucosae.

Statistical analysis was performed using GraphPad Prism 4 for Windows, version 4.03. Data were compared by Mann–Whitney test and Fisher’s χ2 test. A p-value < 0.05 was considered to be significant.

Written informed consent was obtained from parents of children enrolled. The study protocol was approved by the Ethical Committee of the University ‘Federico II’ Naples, Italy (CE 230/05). 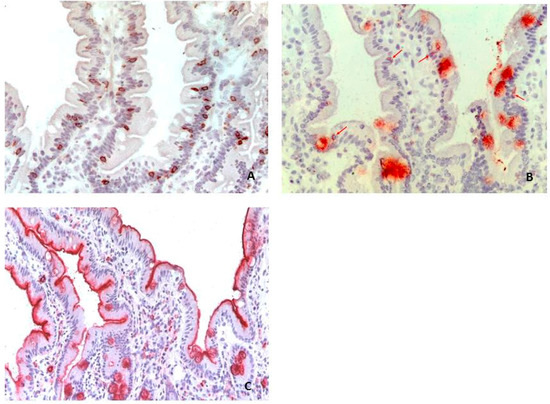 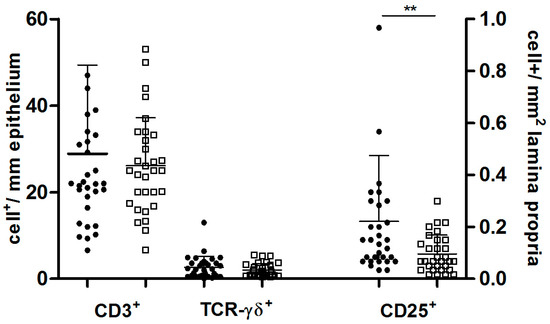 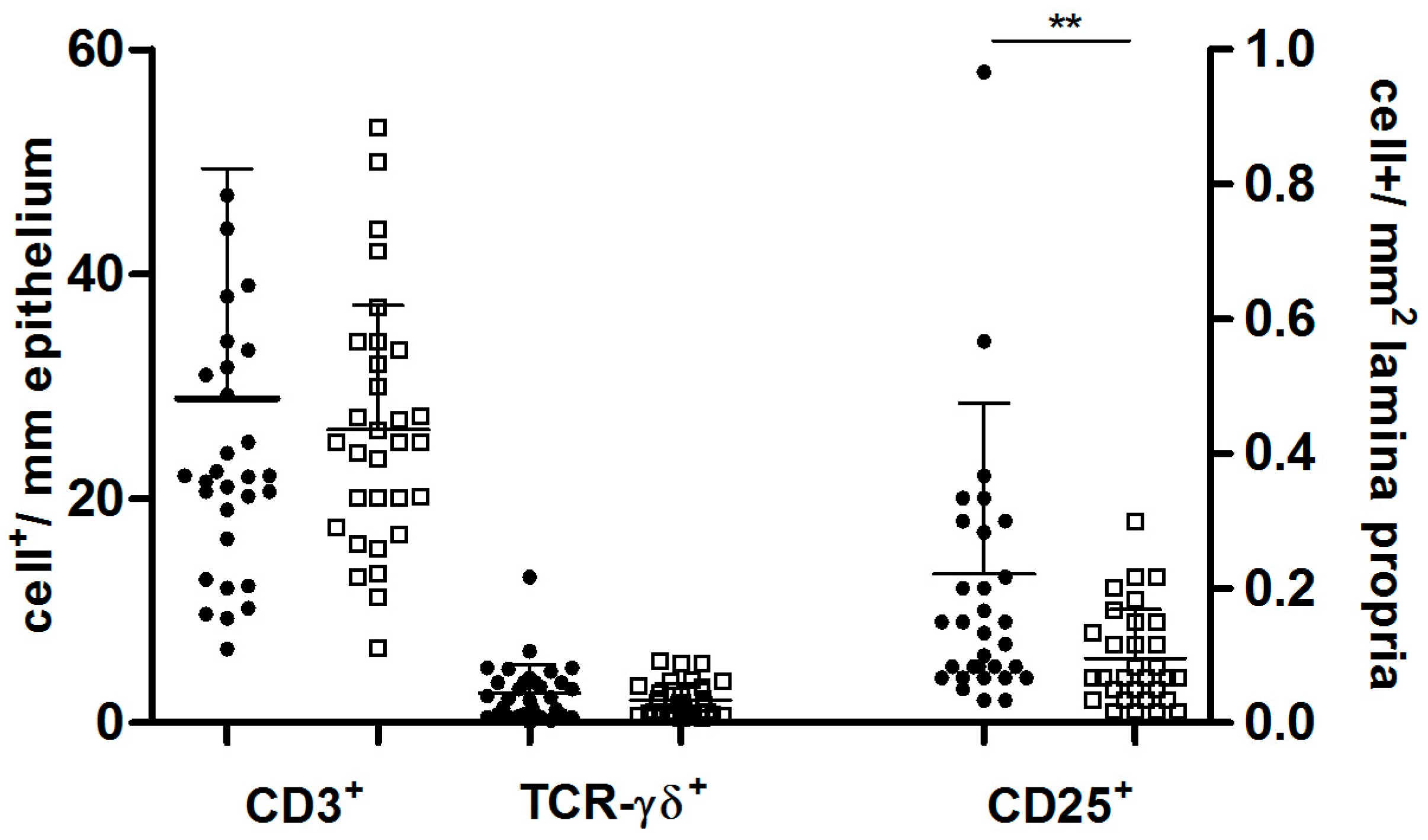