Amino acids and more precisely, branched-chain amino acids (BCAAs), are usually consumed as nutritional supplements by many athletes and people involved in regular and moderate physical activities regardless of their practice level. BCAAs have been initially shown to increase muscle mass and have also been implicated in the limitation of structural and metabolic alterations associated with exercise damage. This systematic review provides a comprehensive analysis of the literature regarding the beneficial effects of BCAAs supplementation within the context of exercise-induced muscle damage or muscle injury. The potential benefit of a BCAAs supplementation was also analyzed according to the supplementation strategy—amount of BCAAs, frequency and duration of the supplementation—and the extent of muscle damage. The review protocol was registered prospectively with Prospective Register for Systematic Reviews (registration number CRD42017073006) and followed Preferred Reporting Items for Systematic reviews and Meta-Analyses guidelines. Literature search was performed from the date of commencement until August 2017 using four online databases (Medline, Cochrane library, Web of science and ScienceDirect). Original research articles: (i) written in English; (ii) describing experiments performed in Humans who received at least one oral BCAAs supplementation composed of leucine, isoleucine and valine mixture only as a nutritional strategy and (iii) reporting a follow-up of at least one day after exercise-induced muscle damage, were included in the systematic review analysis. Quality assessment was undertaken independently using the Quality Criteria Checklist for Primary Research. Changes in indirect markers of muscle damage were considered as primary outcome measures. Secondary outcome measures were the extent of change in indirect markers of muscle damage. In total, 11 studies were included in the analysis. A high heterogeneity was found regarding the different outcomes of these studies. The risk of bias was moderate considering the quality ratings were positive for six and neutral for three. Although a small number of studies were included, BCAAs supplementation can be efficacious on outcomes of exercise-induced muscle damage, as long as the extent of muscle damage was low-to-moderate, the supplementation strategy combined a high daily BCAAs intake (>200 mg kg−1 day−1) for a long period of time (>10 days); it was especially effective if taken prior to the damaging exercise. View Full-Text
Keywords: branched-chain amino acids (BCAAs); exercise-induced muscle damage; skeletal muscle; nutritional strategy branched-chain amino acids (BCAAs); exercise-induced muscle damage; skeletal muscle; nutritional strategy
►▼ Show Figures 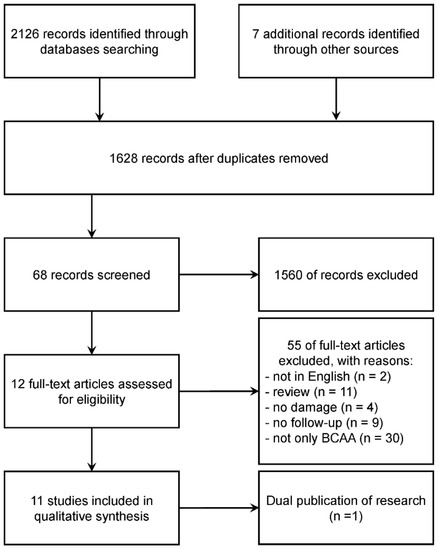