The Effect of Low Carbohydrate Diets on Fertility Hormones and Outcomes in Overweight and Obese Women: A Systematic Review
Previous Article in Journal

Roger A. Fielding 1 and

Hepatic de novo lipogenesis (DNL) is the biochemical synthesis of fatty acids from acetyl-CoA subunits that result from glycolysis and carbohydrate metabolism. Consuming a high-carbohydrate diet can elevate circulating glucose and insulin concentrations, which upregulates DNL and intrahepatic fat accumulation [1]. This process occurs when excessive acetyl-CoA produced in the Kreb’s cycle is converted to malonyl CoA through reactions catalyzed by acetyl-CoA carboxylase (ACC), fatty acid synthase (FASN) and stearoyl-CoA desaturase (SCD). Excess fat accumulation in the liver may lead to (or exacerbate existing) peripheral insulin resistance and hypertriglyceridemia [2,3]. These metabolic dysfunctions are associated with the accumulation of total body fat, and, if left untreated, can result in nonalcoholic fatty liver disease and type 2 diabetes [4,5].
Reducing dietary energy intake and manipulating the macronutrient composition of the diet can prevent the development of and mitigate existing metabolic dysfunction. Caloric restriction (CR) lowers intrahepatic triglyceride content and enhances insulin sensitivity by reducing total body fat mass [6]. Increasing protein intake within the acceptable macronutrient distribution range (>10% but ≤35% of total energy intake) at the expense of carbohydrate (higher-protein/lower-carbohydrate diet) may further improve metabolic health with CR [7]. Higher-protein/lower-carbohydrate CR diets reduce circulating triglyceride concentrations and appear to stabilize postabsorptive glucose homeostasis [1,8] and reduce postprandial glycaemia and insulinemia [9,10,11]. These glycemic responses limit substrate availability for DNL, reduce intrahepatic triglyceride accumulation, and enhance insulin sensitivity. Although combining a higher-protein/lower-carbohydrate diet with CR appears to be beneficial, the independent versus synergistic effects of such dietary manipulations on glycemic control, DNL, and intrahepatic triglyceride concentrations are not well described.
The objectives of the present investigation were to assess the independent effects of CR, higher-protein/lower-carbohydrate intake, and the combined effects of both on glucose homeostasis, DNL, and intrahepatic triglyceride concentration after a 16 week controlled feeding intervention. We hypothesized that consuming a higher-protein/lower-carbohydrate diet during CR would reduce circulating glucose and insulin concentrations to a greater extent than CR alone and higher-protein ad libitum (AL) feeding. Additionally, we hypothesized that higher-protein diets alone would downregulate molecular regulators of DNL, and that combining CR with higher-protein feeding would confer the greatest glycemic and lipogenic advantage over either of the interventions alone.

Twelve-week-old male Sprague Dawley rats (n = 40; Charles River Laboratories) were housed in a temperature-controlled room on a 12 h light–dark cycle. Following a two week acclimation phase, rats were randomly assigned to one of four diet groups consuming ad libitum (AL) or calorie restricted (CR; 40%) diets, with standard (10%) or high (32%) protein (PRO) content for 16 weeks. A total of 10 rats were randomized into each diet group. Only tissue samples from rats consuming milk-based protein diets were selected for this study, to eliminate protein source as a confounding variable, given that the intent of this study was to determine the independent and combined effects of altered protein and carbohydrate intake with AL or CR feeding. All study procedures were approved by the US Army Research Institute of Environmental Medicine Animal Care and Use Committee. This prolonged study in healthy male rats was part of a larger investigation [12] assessing the influence of energy status and dietary protein level and source on bone metabolism. Non-obese, healthy male rats were studied to reflect the population of military service members that are most likely to be exposed to prolonged underfeeding during extended military operations. Identifying ways to improve metabolic health in this population by manipulating the macronutrient composition of a calorie restricted diet is a primary focus of our research program.

Purified study diets based on AIN-93 (Dyets, Inc., Bethlehem, PA, USA) were modified to provide 10% and 32% protein to reflect the lower and upper end of the current acceptable macronutrient distribution range (milk protein concentrate, Idaho Milk Products, Jerome, ID, USA) [12]. Chemical analysis of diets was performed to ensure nutrient content (Covance Laboratories, Dedham, MA, USA). The amount of feed provided to the CR rats was initially determined by averaging daily intake (26 g·day−1) during the 14 day acclimation phase. Feed intake for CR fed rats was 16 ± 2 g·day−1, whereas the AL rats consumed 26 ± 3 g·day−1. Feed intake for the AL rats was assessed every 2 days, such that adjustments could be made to ensure the CR rats maintained a 40% energy deficit. Complete dietary intake data has been reported [12]. Macronutrient content (% energy) of the diets was 10% protein, 20% fat, and 70% carbohydrate (Adequate); and 32% protein, 22% fat, and 46% carbohydrate (PRO). The carbohydrate-to-protein ratio for rats consuming the 10% PRO diet was 7:1 g·day−1, whereas the ratio for rats consuming the 32% PRO diet was 1.3:1 g·day−1.

The primary findings from this study were that reducing the ratio of dietary carbohydrate-to-protein (7:1 vs. 1.3:1) lowered intrahepatic triglycerides, particularly when combined with CR. The hepatic health benefits of consuming a higher-protein CR diet appeared to be driven by the downregulation of DNL caused by reduced gene expression and total protein content of several molecular regulators of intrahepatic lipogenesis. Reducing the dietary carbohydrate-to-protein ratio also tended to improve glycemic control, as indicated by HOMA-IR (e.g., estimate of insulin sensitivity), while CR independently improved HOMA-β (e.g., estimate of pancreatic β-cell function). These findings confirm the independent metabolic advantages of dietary energy and protein manipulations, as well as demonstrate that benefits are more pronounced when CR and higher-protein/lower-carbohydrate diets are combined.
Excess body fat—particularly visceral fat—is often accompanied by the accumulation of intrahepatic triglycerides [15]. An increase in intrahepatic triglyceride concentrations can inhibit insulin receptor kinase activity, leading to impaired glucose homeostasis and insulin resistance [16,17,18]. Findings from the present investigation, supported by others [19,20], indicate that nutrition interventions can target multiple metabolic dysfunctions, as total body fat mass, circulating insulin concentrations, HOMA-β, and intrahepatic triglyceride concentrations were lower in CR compared to AL fed rats. Though not statistically significant, rats fed higher-protein (32% PRO) tended to improve glucose and HOMA-IR compared to standard protein (10% kcal), regardless of energy intake. Interestingly, several investigations have suggested that increased protein intake may be detrimental to glucose homeostasis [21,22] because elevated branched-chain amino acid (BCAA) concentrations have been associated with insulin resistance [23,24]. Some suggest that amino acid-induced activation of the mechanistic target of rapamycin complex 1 (mTORC1) inhibits activity of insulin receptor substrate 1, disrupting insulin signaling and thus impairing glucose homeostasis [25]. However, findings from the present and past studies [8,9,11,26,27] have shown that consuming a higher-protein/lower-carbohydrate diet stabilizes or at least maintains glycemic control. Varying results between investigations may be attributed to methodological discrepancies. Several investigations reporting negative associations between insulin sensitivity and elevated BCAA concentrations isolated signal nutrients by employing BCAA-deficient diets to show an effect [28,29]. In the present study and others reporting a benefit of increased protein intake [8,9,11,26,27], investigators manipulated multiple macronutrients, with elevated protein intake matched by reductions in carbohydrate intake. Likely, the combination of alterations in protein and carbohydrate intake causes lower postprandial glycemic and insulinemic responses to meals, upregulated postabsorptive gluconeogenesis, and thus enhanced glycemic control over time [7].
Along with alterations in circulating insulin concentrations and intrahepatic triglycerides, a downregulation in the gene expression of PDK4 was observed with CR. PDK4 is an inhibitor of pyruvate dehydrogenase, which is the enzyme required for the entry of metabolites derived from glycolysis into the Kreb’s cycle [30]. The expression of PDK4 is sensitive to insulin, as insulin resistance results in an upregulation of PDK4 expression [31]. Following reductions in triglyceride concentrations at the tissue level with prolonged starvation, declines in the expression PDK4 have been shown to be the result of greater insulin sensitivity, allowing for improved glucose uptake and metabolism [32,33]. Diminished PDK4 gene expression with CR and correlations to intrahepatic triglyceride concentrations in the current study further highlights the relationship between excessive lipid accumulation in the liver and glucose metabolism.
Lower intrahepatic triglyceride concentrations in the present investigation may be the result of downregulated DNL. The synthesis of endogenous fatty acids is due to over-consumption of calories and dietary carbohydrate, resulting in an upregulation in ACC, FASN, and SCD activity [34,35,36]. As such, CR and lower-carbohydrate diets diminish DNL and intrahepatic triglycerides [37,38,39,40]. The present study is the first to examine their independent and synergistic effects on molecular regulators of DNL, particularly in non-obese, healthy rats, even though previous investigations have reported benefits of CR and altered macronutrient intake. Interestingly, the independent effects of altered calorie and carbohydrate-to-protein intake on molecular regulators of DNL appear to target distinct regulatory processes. Independent of macronutrient intake, CR primarily drove the downregulation of FASN and SCD1 gene expression (e.g., transcription), while higher-protein/lower-carbohydrate intake diminished total hepatic protein content of FASN and SCD (e.g., translation) regardless of calorie intake. While no calorie-by-protein interactions were observed on gene or protein expression, the independent effects of CR and higher-protein/lower-carbohydrate intake appear to culminate into a synergistic benefit, as rats fed CR 32% PRO diets had the lowest levels of intrahepatic triglyceride concentrations.

Any opinions, findings, conclusions, or recommendations expressed in this publication are the private views of the authors and are not to be construed as official or as reflecting the views of the Army or Department of Defense or U.S. Department of Agriculture (USDA). Any citations of commercial organizations and trade names in this report do not constitute an official Department of the Army or U.S. Department of Agriculture (USDA) endorsement of approval of the products or services of these organizations. This material is based on the work supported by the US Army Medical Research and Material Command, the Dairy Research Institute, and the USDA under agreement No. 58-1950-4-003. L.M.M. was supported by the T32 NIDDK training grant # 5T32DK062032-23 and D.A.R was supported by the NIA K01 award # KAG047247A-A1. 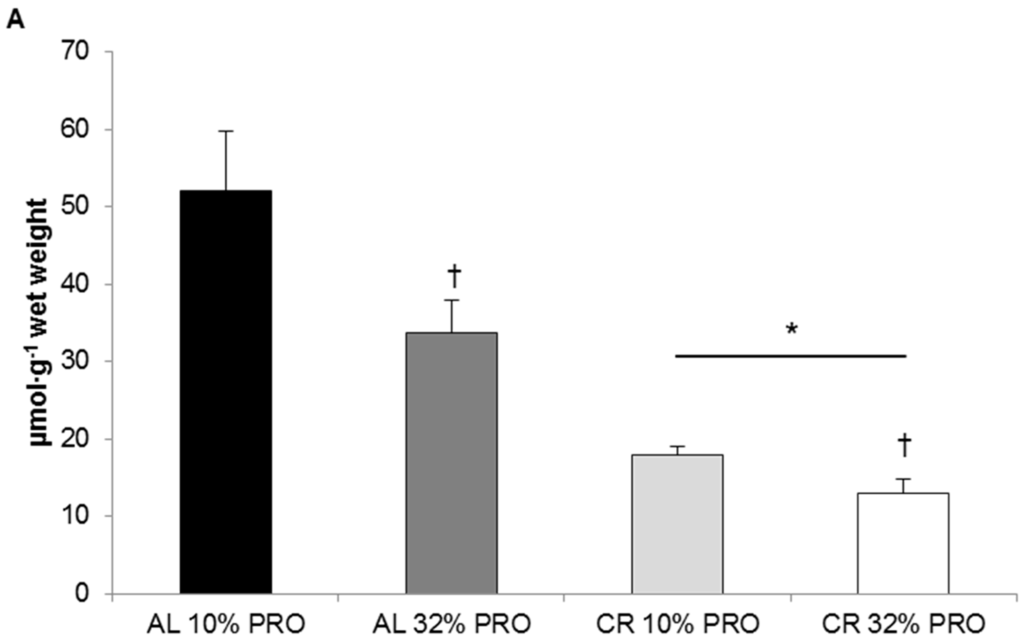 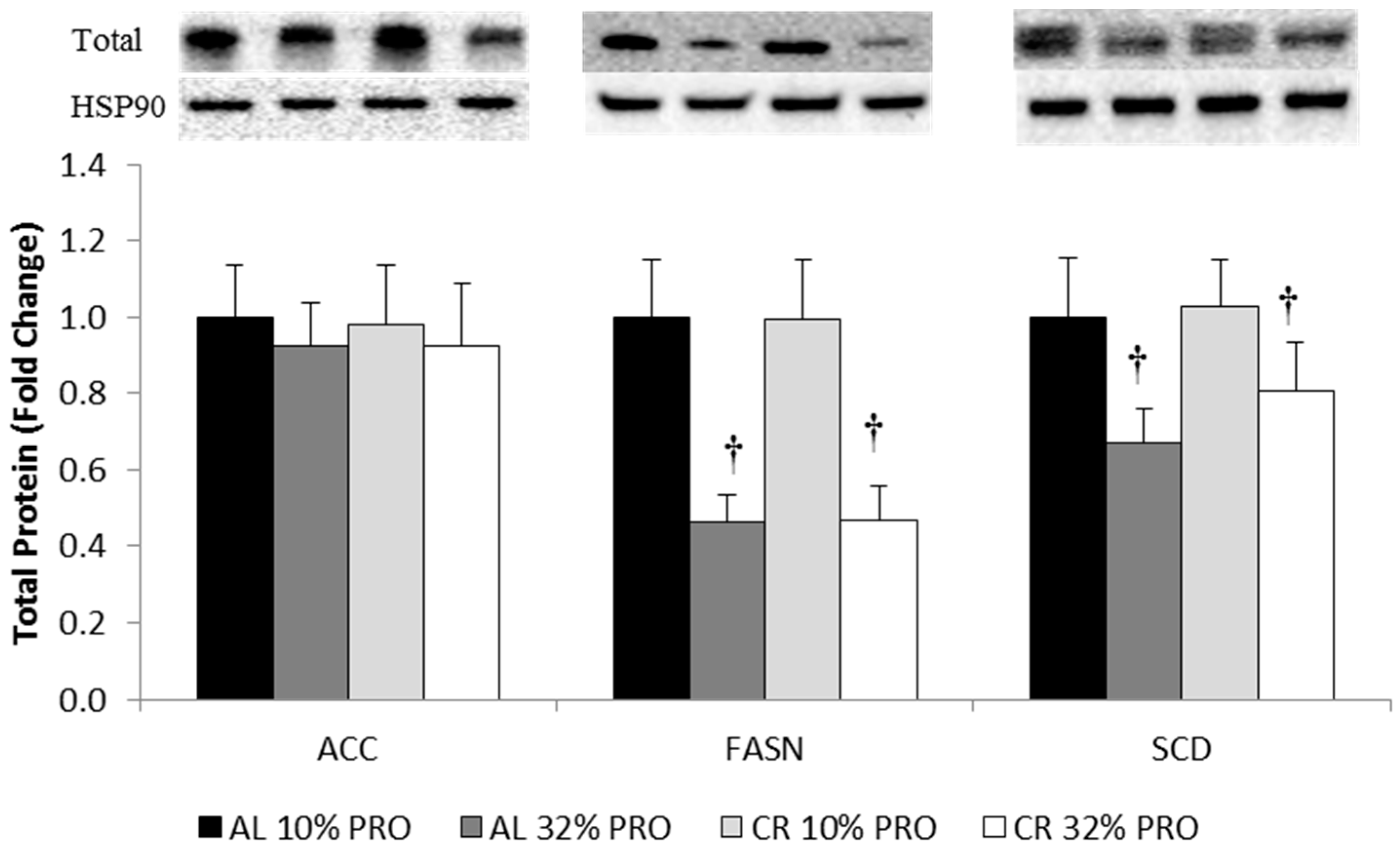